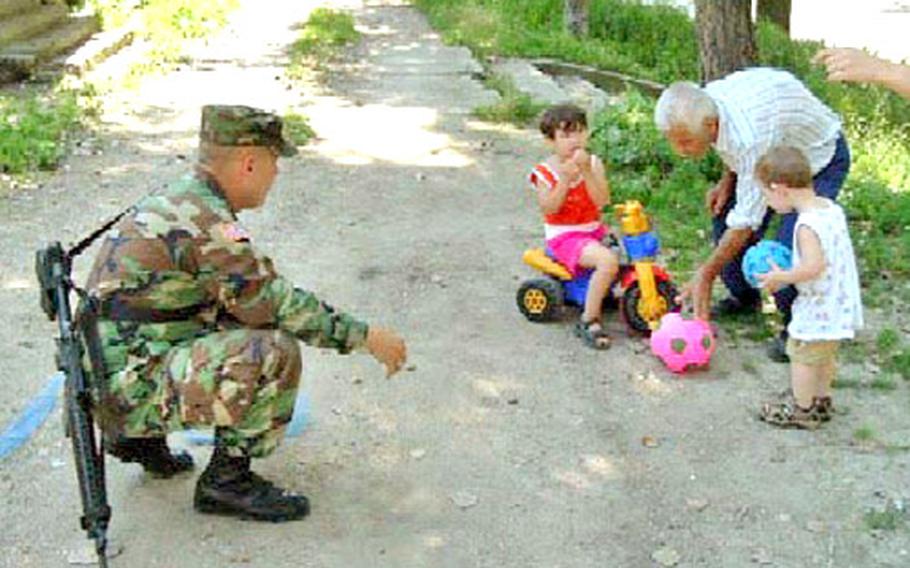 Spc. Doug Bullock plays ball with some of his neighbors in Valsenica. He is among the members of the Indiana National Guard living in a house in the Serb area of country. (Timothy Schriver, Courtesy of U.S. Army)

Spc. Doug Bullock plays ball with some of his neighbors in Valsenica. He is among the members of the Indiana National Guard living in a house in the Serb area of country. (Timothy Schriver, Courtesy of U.S. Army) 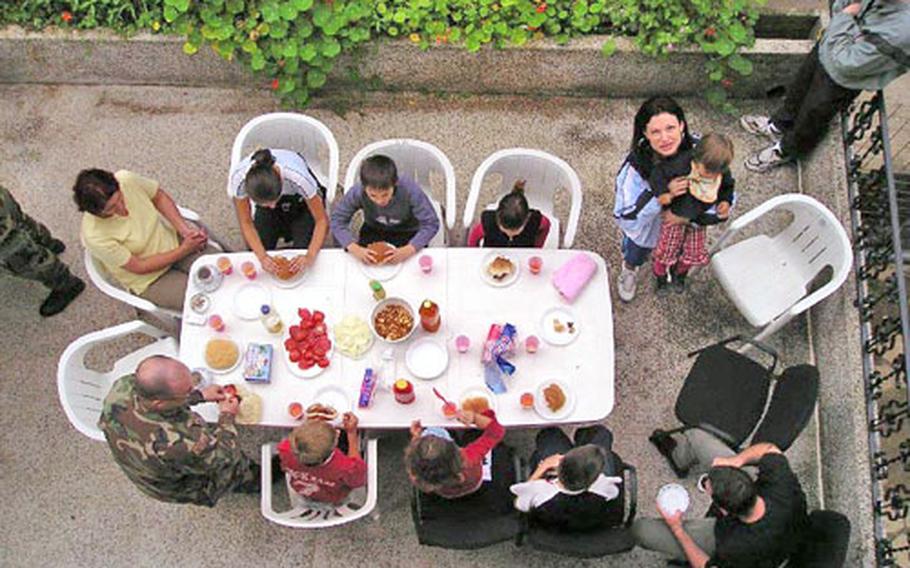 Staff Sgt. Scott Winn, lower left, shares a meal with a Serb family in Vlasenica, where he and several other Indiana National Guard soldiers live in a house in the community. (Timothy Schriver, Courtesy of U.S. Army) 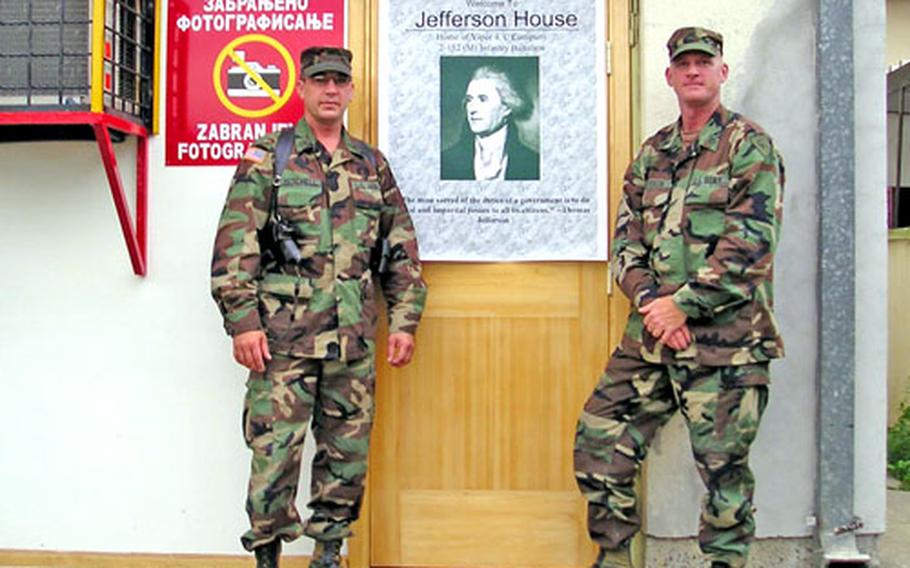 Staff Sgt. Douglas Mitchell, left, and Staff Sgt. Michael Spurgin stand outside the house they and other members of the Indiana National Guard live in in Vlasenica, Bosnia-Herzegovina. (Timothy Schriver, Courtesy of U.S. Army) 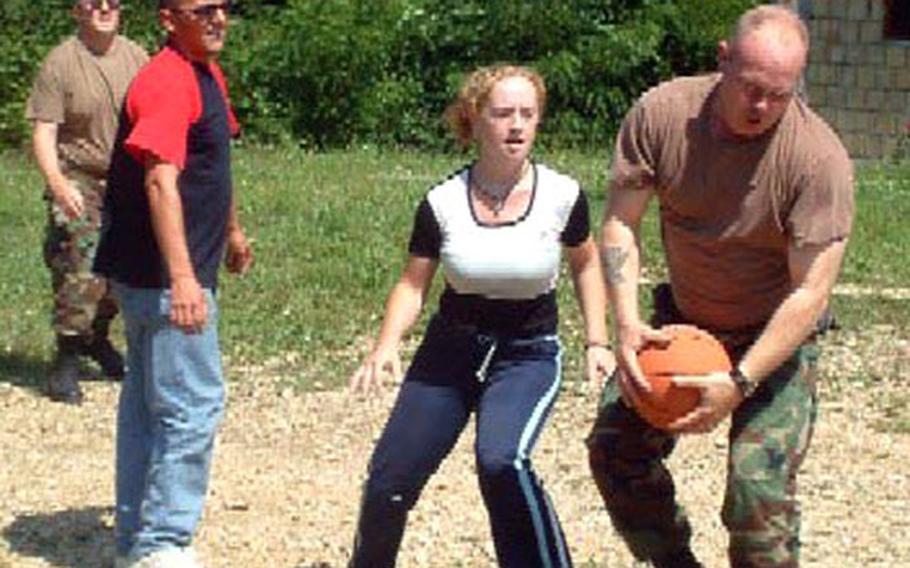 For more than two months, Indiana National Guard soldiers have been living in towns in the Serbian portion of Bosnia-Herzegovina, dining in the local restaurants, sharing coffee with the residents in cafes and making friends.

The Army has houses in six towns in the part of the country that has been the most contentious since the peace implementation mission began in 1995. More than a dozen soldiers and at least one translator live in each house.

&#8220;There were some concerns at first about safety and force protection,&#8221; said 1st Lt. Shawn Roberts.

But, he said, the troops, known as liaison observation teams or LOTs, have been accepted as part of the communities in which they live. They meet with police chiefs, mayors and the general public.

The civil war that raged for more than three years in the country ended when the Dayton peace agreement was signed, dividing the country into the federation of Muslims and Croats, and the Serbian republic.

Living in base camps surrounded by barbed wire and carrying out heavily armed patrols, the Implementation Force &#8212; or IFOR &#8212; forced the former combatants to live up to the Dayton accord.

Over time, the force, now known as the Stabilization Force (SFOR), dwindled, as did the need for such tight security. Troops living in towns in the area known as the Republic of Srpska would have been unheard of a few years ago.

&#8220;We have not had that first complaint about soldiers living in their community,&#8221; said Spurgin, who lives with several other soldiers in a house in Vlasenica. &#8220;We can approach anybody in that town and people will talk to us.&#8221;

The LOT soldiers wear uniforms, but drive non-tactical vehicles and don&#8217;t carry long weapons. They work in teams of three and visit all the villages and towns in their particular area of responsibility.

They don&#8217;t take part in events like weapon roundups to maintain their sense of neutrality.

&#8220;We can pretty much go anywhere in our [area of responsibility] and speak to anybody,&#8221; said Spc. Doug Bullock, who also lives in Vlasenica.

The troops are told mostly about corrupt politicians or police chiefs who are not performing their job. Each day, the LOT soldiers write reports of what they&#8217;ve learned and send them up the chain of command.

&#8220;We&#8217;re a direct link between the people in our town and SFOR,&#8221; said Bullock, who said the job is not much different from his civilian work as deputy sheriff in Wayne County, Ind.

The soldiers say they feel safe and welcome in the community and have learned to mix with the locals. The biggest danger so far has come from the food.

Some troops have gotten sick after eating, so those places are avoided.

Bullock said the soldiers like to visit the cafes and drink coffee, which almost always leads to a conversation with a Bosnian.

Spurgin, who is a training officer for the Indiana Department of Corrections, said he helped a neighbor cut wood. When finished, they sat and drank coffee together and talked.

Like many soldiers who have served in Bosnia, the Indiana troops have fallen in love with the country&#8217;s beauty. And the LOT soldiers have made friends in the towns where they live.