Indiana Guard team helps Afghans get most from their land 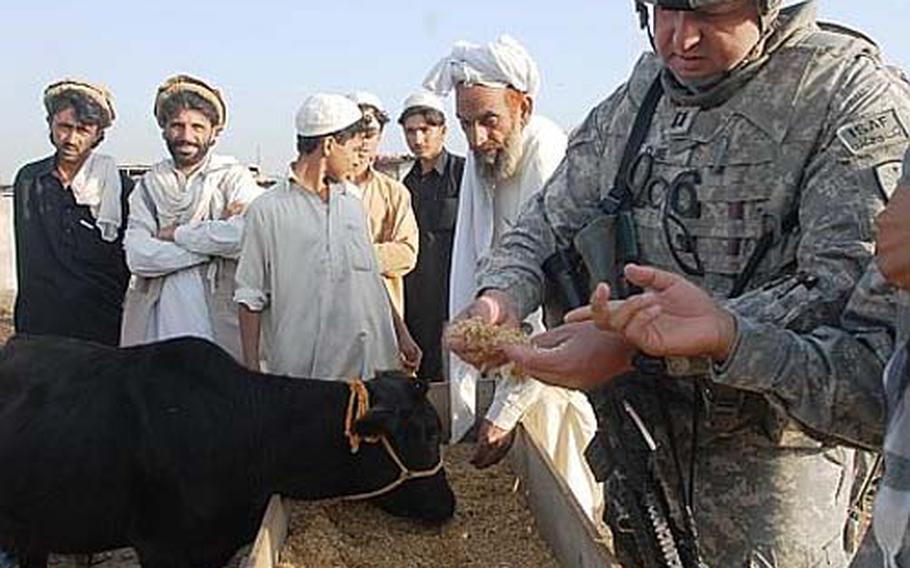 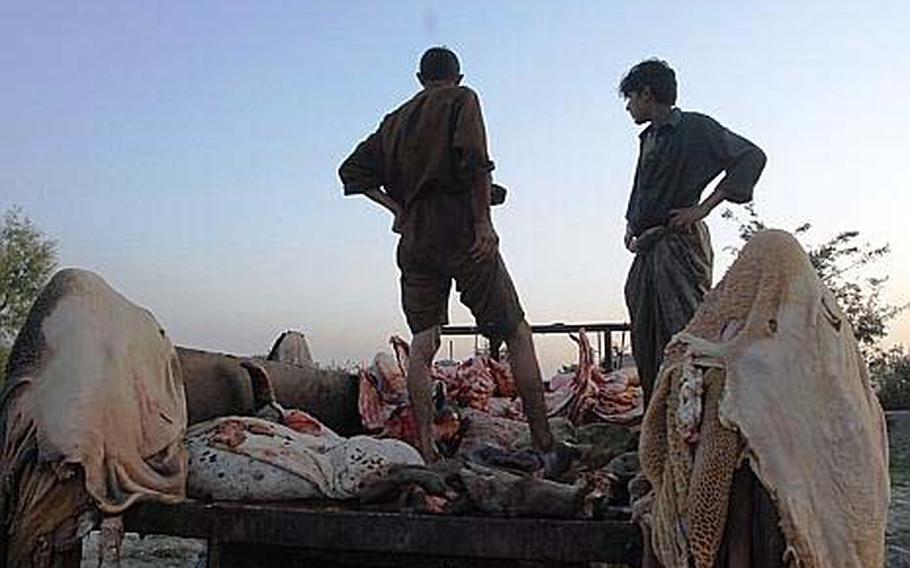 Workers stand in a truck’s flatbed after washing parts of cows and water buffalo in the Shamal River, which U.S. Army officials says is contaminated and could harm those who consume the meat. (Sandra Jontz / S&S) 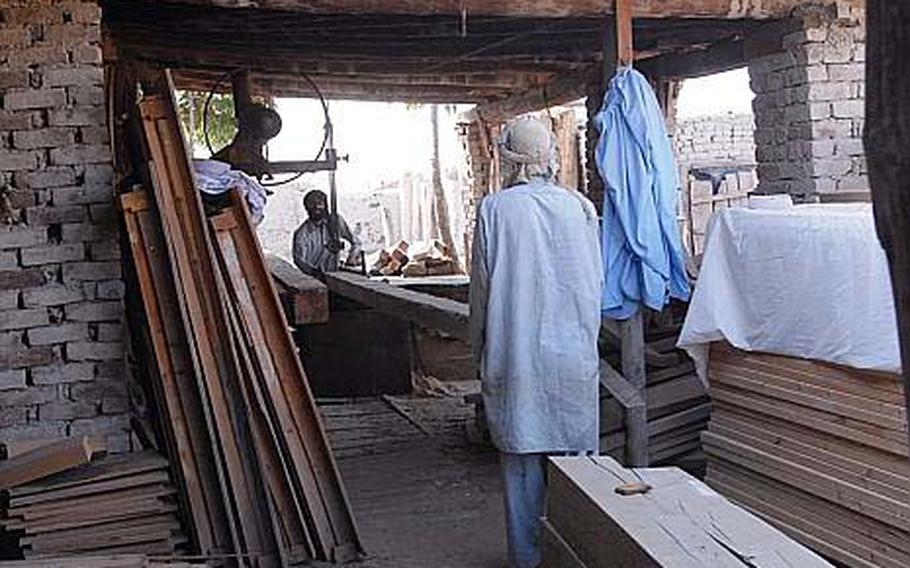 Carpenters cut lumber with a band saw at the lumber market in Khost city, one of few local shops with specialized equipment to add value to regional products. Wood scraps are sold as firewood and sawdust is sold for the manufacture of particleboard. (Sandra Jontz / S&S) 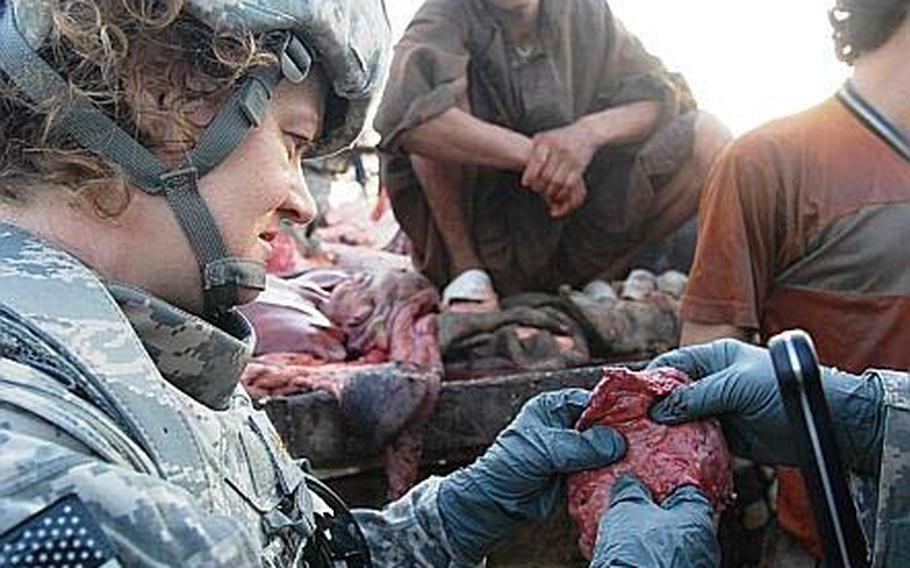 Maj. Heather Shuey-Burton, a veterinarian, inspects the lung of a water buffalo that workers had taken to the polluted Shamal River to wash. She needed to examine the carcass further to tell whether the meat was safe to eat. (Sandra Jontz / S&S) 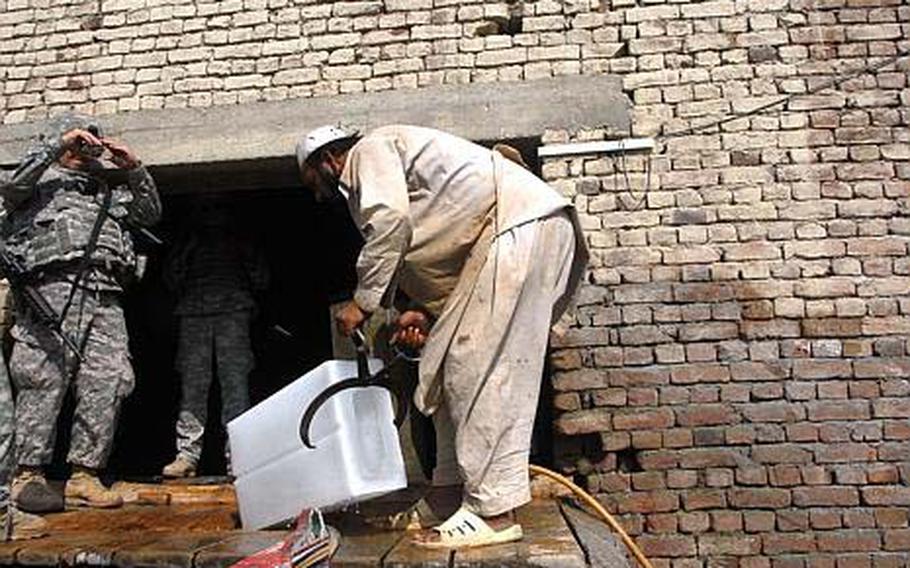 Mohammad Din hoists a 60-kilo block of ice to show soldiers of the 1-19th Agribusiness Development Team of the Indiana National Guard, which toured his ice-making factory. (Sandra Jontz / S&S)

KHOST CITY, Afghanistan &#8212; Mohammad Din operates a small ice-making factory in the southeastern city of Khost, where every day he creates some 33 tons of ice for customers ranging from ice cream shops to people without refrigerators who have no other way to keep their food cool.

But whatever Din doesn&#8217;t sell melts back to water at the end of each day, because his ice factory lacks a piece of fundamental equipment: a freezer.

Last week, Din sought help from some soldiers in the 1-19th Agribusiness Development Team of the Indiana National Guard, who were assessing needs in the region.

Could they possibly get him a freezer? he asked through a translator.

The soldiers expressed interest, because helping this small ice factory is precisely the kind of quick-results development project the Americans hope will help spread stability across this war-ravaged nation.

But they could make no promises, the soldiers said, until they could weigh Din&#8217;s desire against many other local needs &#8212; and their limited resources.

"I was excited about the ice market," said Army Capt. Bob Cline, a member of the team. With its 100-kilowatt generator and ammonia coolant system, the factory "showed a high degree of sophistication," he said.

"If they have the equipment, they can do the job," said Sgt. Maj. Scott Bassett.

Throughout the area, the ADT team members are working to help Afghans improve their water management, livestock, farming and forestation techniques.

Priority is given to projects that are small, inexpensive and easy to sustain, officials said. And sometimes all that&#8217;s needed is some advice, such as spreading seeds deeper to boost crop growth or improving animal feed.

One project the team is considering is a washing station for slaughtered animals near the Khost livestock market that would cost about $5,000, Cline said. The meat is currently carted a few miles away and washed in the polluted Shamal River, where it&#8217;s exposed to contamination.

That&#8217;s why their Indiana National Guard unit has pledged to keep sending agriculture specialists to Afghanistan for the next five years.