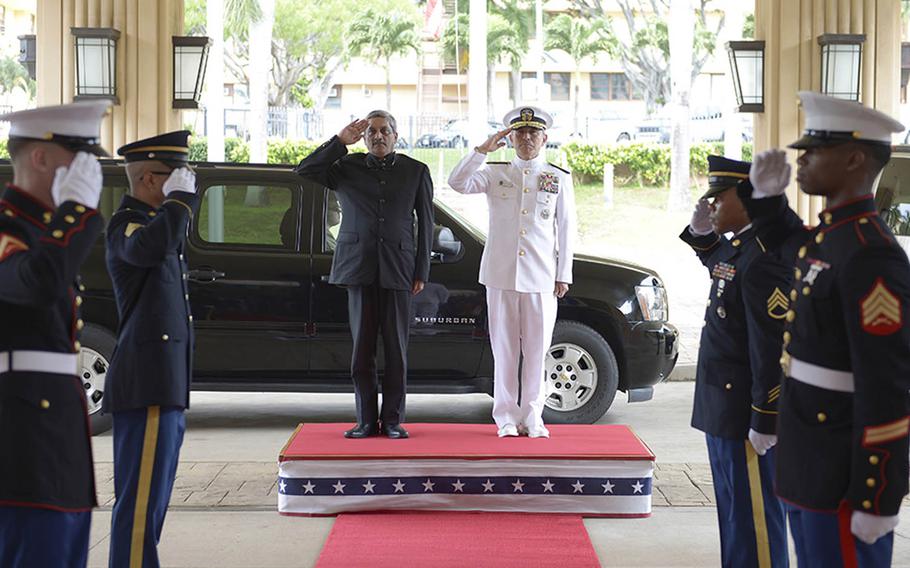 PACOM commander Adm. Harry B. Harris Jr. met with Parrikar at Camp H.M. Smith, where they discussed the growth of the U.S.-India strategic partnership and the importance of expanded maritime security cooperation in military-to-military ties, a PACOM statement said.

The visit follows Indian Prime Minister Narendra Modi’s trip to the United States in September. Defense relations between India and America are at a post-World War II high, many analysts say.

Earlier this fall, India’s cabinet approved a $2.5 billion deal to buy 22 Apache attack helicopters and 15 Chinook helicopters from the U.S., and American officials have promised to share top aircraft-carrier and jet-engine technology. India hosted a naval exercise in October that included ships from the U.S. and Japan.

Military cooperation was accelerated in January when India and the U.S. signed the Joint Strategic Vision for the Asia-Pacific and Indian Ocean Region, which commits the nations to working on mutual goals. “The importance of safeguarding maritime security and ensuring freedom of navigation and over flight throughout the region, especially in the South China Sea” is among the topics affirmed in the document.

Harris and Parrikar talked about the potential for joint U.S.-India maritime patrols, according to the PACOM statement, but it did not specify where those might take place. No further details on the closed-door talks are available, a PACOM spokesman said.

Although India does not border the South China Sea, the U.S. has been urging allies and partner nations in the region to join in so-called freedom-of-navigation patrols near disputed islands on which China has built runways and other structures, a process that the U.S. has characterized as “militarization.”

India has tried to balance its relations with America and China but now seems intent on shoring up its defense relationship with the U.S. Its relationship with China is thorny, with a longtime border dispute in the northeastern state of Arunachal Pradesh, where troops sometimes clash. India, like many other nations, has experienced cyberattacks that originated in China.

India is also competing for influence with its closest neighbors — Bangladesh, Nepal, Sri Lanka and Myanmar — which China has lavished with development projects and financial assistance.

Harris and Parrikar also discussed the numerous exercises in which both countries participate — Malabar, Yudh Abhyas, Red Flag, Vajra Prahar and RIMPAC — “re-emphasizing that the United States is still India’s partner of choice for exercises and military-to-military engagements,” the statement said.