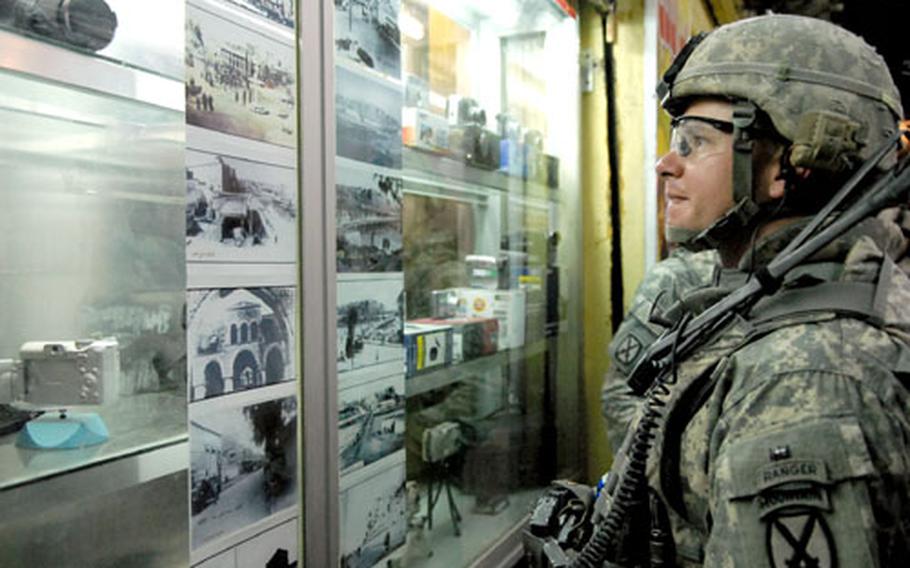 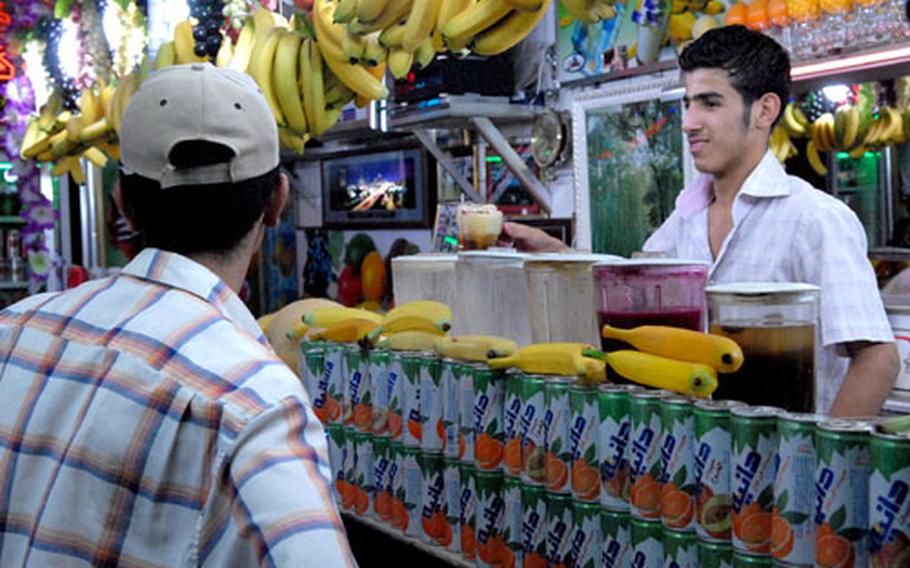 A juice seller hands a fruit drink to a customer Saturday evening in a Kirkuk market. Music was blaring in the sparkling fluorescent-lit eatery as if it were a &#39;50s-era soda shop, a sign of the city&#39;s growing stability. (James Warden / S&S) 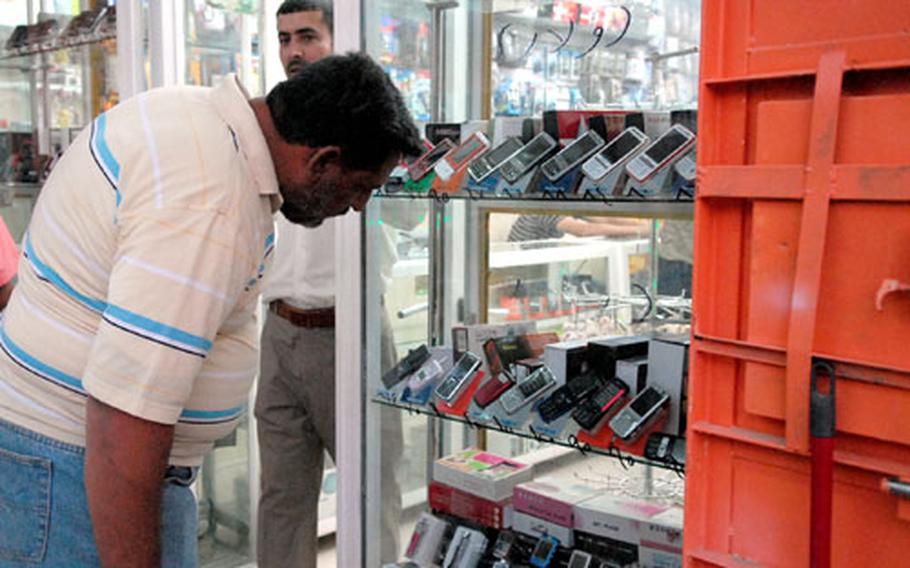 A shopper looks a cell phone display in one of Kirkuk&#39;s markets Saturday. Cell phone stores were rare a year ago, but are now everywhere thanks to security increases that have helped the markets flourish. (James Warden / S&S)

But for Adnan, a Kirkuk resident enjoying a sweet-flavored smoke from a waist-high hookah Saturday night, those simple pleasures weren&#8217;t so easy to come by just a year ago. Kirkuk was much more dangerous then, and Adnan had to spend most of his evenings at home.

Enjoying the evening cool with a couple buddies, he reflected on the differences a year has made for the city.

"We could not sit here like this," he concluded.

The military will happily provide statistics to show just how dramatically Kirkuk&#8217;s security has increased over the past year. But visitors need only wait until the sun goes down and then venture into one of the Kirkuk&#8217;s several bustling markets to see that residents are feeling safer than ever in one of Iraq&#8217;s most diverse cities.

By rights, Kirkuk should be one of the country&#8217;s flash points. The Kurdish provinces claim the city as their own. Saddam Hussein intentionally displaced many Kurdish residents with Arabs during his reign to keep it in Iraq, and many of them now call the city home. Those Arabs are mostly Sunnis, but Shiites also live in the city, as well as non-Arab minorities like Turkmen.

Kirkuk also sits on top of an oil field that pumped about 13 million barrels of oil in each of the past two months. Should the Kurdish provinces secede and take Kirkuk with them, Iraq would lose about 13 percent of its oil.

Still, different groups mix and mingle peacefully right up until the nightly curfew &#8212; unlike in Baghdad&#8217;s markets, which tend to be segregated. Throughout the busy streets, groups of Kurds and Sunni Arabs relax at neighboring tables.

Allah Fakreek, who came up from Baghdad to visit relatives in Kirkuk, was one of those taking advantage of the relaxed environment. He sipped coffee and smoked cigarettes while chatting with friends and family outside the same shop as Adnan.

"We cannot hang around at night like this in Baghdad," he said.

Mahmood Azadeen is a shoe- and clothing-store owner who claims both Arab and Kurdish ancestry. Like many residents, Azadeen is markedly ambivalent about political issues of the day.

"I have nothing to do with politics," he said. "All I care about is my business."

And business is what these markets are all about. Children hawked gum to soldiers patrolling the streets Saturday evening. Scents escaping a marble-floored perfume shop caught noses before eyes ever noticed the store. Everywhere shop owners clutched gangster rolls of dinars, waiting to make change for their customers.

"250! 250! Come on by! Come on by!" a tape recorded sales pitch shouted over the clamor of cars and conversation.

Others have updated their wares. In one market, a newsstand offered a selection of Arabic language women&#8217;s magazines &#8212; familiar in format to any Vogue or Cosmo reader. In another, music stores that once sold only religious music now sell unabashedly secular CDs, including the devil&#8217;s own genre: rock &#8217;n&#8217; roll.

To be sure, Kirkuk&#8217;s growing security has created its own difficulties. Shop owner Abdul Amir Umer Hashim Aziz said it&#8217;s costing him more to buy the products that fill his shelves. Serie attributed that to the increase in jobs throughout the city and the amount of money that&#8217;s been flowing in.

As in other part of Iraq, business owners also aren&#8217;t happy with the concrete barriers that have been put up to make it harder for suicide bombers to get in the market. Azadeen owned a restaurant before the walls went up, but people stopped coming because it was too difficult for them to get there. He converted the space to a shoe and clothing store to try to bring the customers back.

And even with all the security improvements, some businessmen remain braced for the worst.

"It&#8217;s safe, but people still expect a car bomb to go off some time," said keymaker Mohammad Nasir, while noting that this year is better than last.