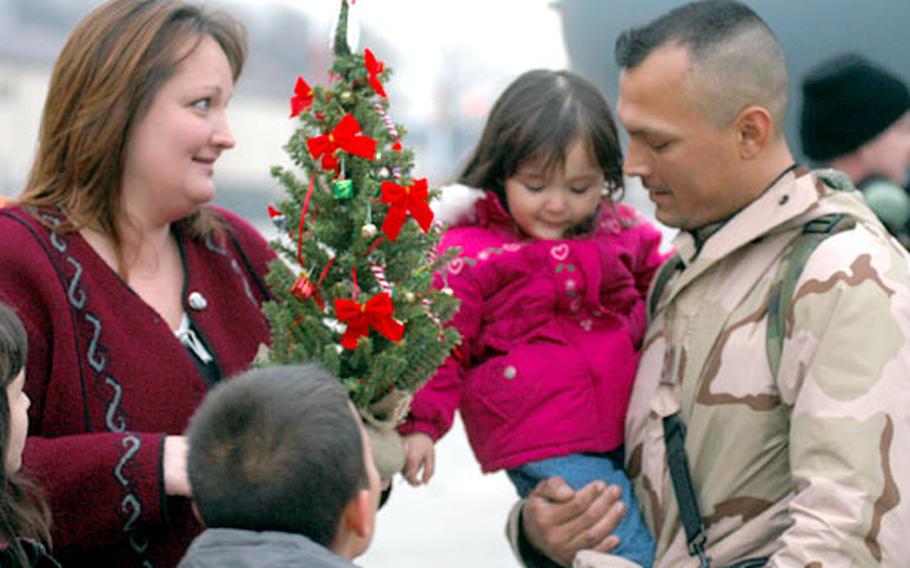 Staff Sgt. Thomas Ward from the 86th Aircraft Maintenance Squadron was met by his wife Kerri, Samantha, 2, and Asa, 8, as he returned to Ramstein Air Base, Germany, on Thursday from a rotation in Iraq. (Ben Murray / S&S)

The following correction to this story was printed in the December 21 edition: "A December 18 story about the 37th Airlift Squadron&#8217;s return from Iraq contained an error. All of the squadron&#8217;s C-130 Hercules aircraft have not yet returned to Ramstein Air Base, Germany."

RAMSTEIN AIR BASE, Germany &#8212; Increased military cargo flights in Iraq have had little effect on airlift squadrons based at Europe&#8217;s cargo-hauling hub, airmen and U.S. Air Forces in Europe officials said this week.

The Air Force&#8217;s top general said Tuesday that C-130 Hercules and C-17 Globemaster cargo lifters have picked up their pace over the past month to decrease the time ground troops spend on dangerous supply routes. But USAFE officials said they have not been asked to provide more aircraft.

Crewmembers of Ramstein C-130 crews just back from Iraq likewise said their missions in Iraq did not change noticeably in recent weeks.

On Tuesday, Air Force Chief of Staff Gen. John P. Jumper told reporters in Washington that transport planes in Iraq were carrying 25 percent more now than they had when he last visited in early November.

Cargo lifters have carried an average of 450 tons of supplies per day over the past month, up from an average of about 350 tons per day, according to media reports.

Contardo and his crew primarily moved personnel in and out of Baghdad and Balad, Iraq, but they also moved some cargo. Aircrews flying missions into Iraq are already so busy that more planes or different types of cargo would likely just get assimilated into the mix, Contardo said. &#8220;There&#8217;s enough Hercs out there that it wouldn&#8217;t change much,&#8221; he said.

With the return of Contardo&#8217;s aircraft this week, all of Ramstein&#8217;s C-130s are back in Germany. Air Force cargo missions may continue to expand in Iraq, with the tonnage of daily shipments continuing to rise, according to media reports.

Arthur said he couldn&#8217;t speculate on what resources USAFE might be required to provide in that case.

That an increase in cargo missions might mean more flights over dangerous territory didn&#8217;t seem to faze the pilots. The airmen said they&#8217;ll deliver their cargo when and where the mission requires. &#8220;If they put it in the back, we&#8217;ll take it anywhere,&#8221; said Capt. Marc Lovelace, another co-pilot with the 37th Airlift Squadron.