Increased air traffic a bonanza for plane spotters in England 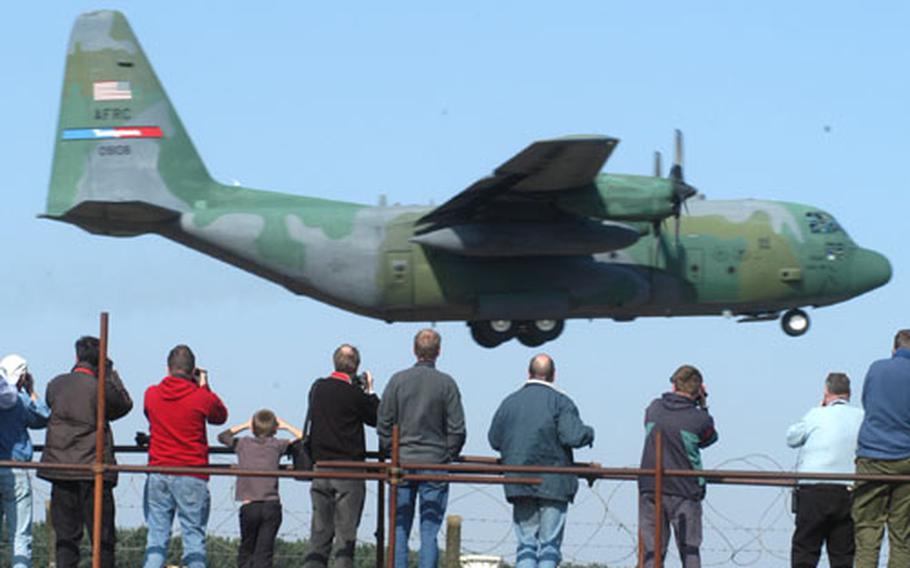 Plane potters at RAF Mildenhall, England, photograph a C-130 arriving at the base Sunday afternoon. The increased activity at the base in recent weeks has brought the aircraft buffs to the base in increased numbers. (Ron Jensen / S&S)

The voice from the air traffic control tower at RAF Mildenhall referred to an airplane approaching from the west, still a few miles away.

Men of all ages rose from lawn chairs, grabbed cameras and ambled to the fence at the west end of the runway in anticipation of seeing their quarry.

When the C-141 Globemaster grew from a smoking dot in the sunlit sky to a hulking gray bird roaring past them, cameras clicked like Geiger counters.

After the aircraft&#8217;s wheels touched pavement and rolled away, the men returned to their lawn chairs and picnic lunches.

With increased air traffic at Mildenhall due to the war, more and more aircraft enthusiasts are making their way to join a handful of regulars in the viewing area here.

Normally, he said, only four or five cars will be parked at the area.

The number of vehicles exceeded 100 on Sunday, when the sun was warm and the wind was calm.

Some of the watchers are simply airplane enthusiasts. But most are &#8220;plane spotters,&#8221; serious collectors of aircraft tail numbers, who record the identifying marks in notebooks and seem intent on personally observing every aircraft in the world.

Women are rare in this congenial crowd, a gathering of friends with a common interest.

They also cart radios tuned to the frequency used by the air traffic controllers to speak with air crews, an early warning system for the enthusiasts.

Some have stepladders to get a view over the fence. A raised platform built years ago boosts a dozen or more photographers above the fence for unobstructed photos.

In between the arrival or departure of aircraft, they relax in chairs pulled from car trunks and munch on lunches packed at home.

In normal times, it is a good bet that the arriving aircraft will be one of the wing&#8217;s KC-135 Stratotankers. But these days, the next plane to appear in the western sky could be a C-141 from Wright-Patterson Air Force Base, Ohio, or a KC-135 belonging to the Pennsylvania Air National Guard.

The spotters know why the traffic is so dense. And they have thoughts on the war that is the destination for many of the airplanes they see.