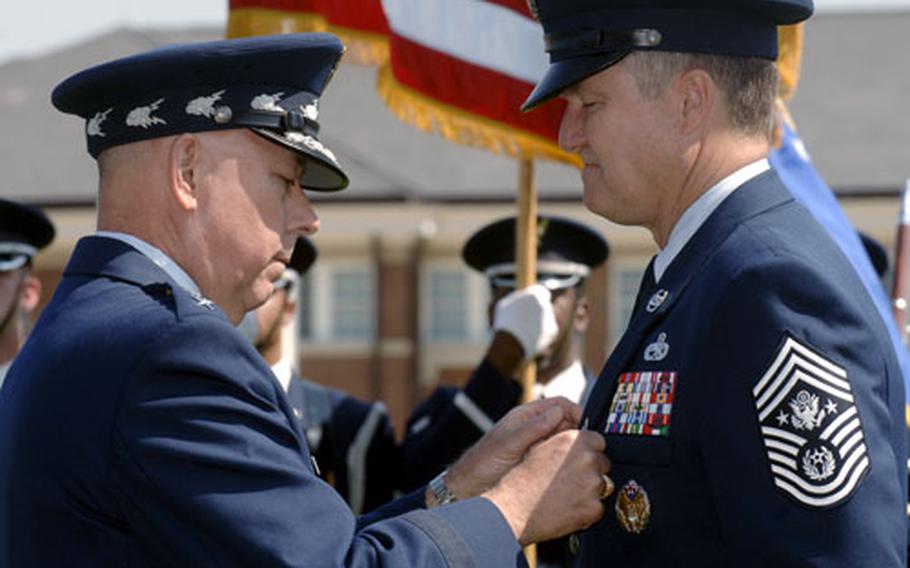 ARLINGTON, Va. &#8211; July 1 was a day of parallel endings and beginnings in the high altitude of senior Air Force leadership, as Chief Master Sgt. of the Air Force Gerald Murray retired after 29 years of military service and passed both his jacket and his post to Chief Master Sgt. Rodney McKinley.

The back-to-back retirement for Murray and promotion ceremony for McKinley took place at Bolling Air Force Base in Washington, D.C., where the sun, heat, and high humidity recalled the weather at McKinley&#8217;s last posting: command chief master sergeant for Pacific Air Forces at Hickam Air Force Base, Hawaii.

McKinley is the 15th person to hold the chief master sergeant of the Air Force job.

As the service&#8217;s top enlisted airman, McKinley now service as a personal advisor to both Air Force Chief of Staff Gen. Michael Moseley and Secretary of the Air Force Michael Wynne on all issues that involve enlisted airmen and their families.

He is also the official &#8220;voice&#8221; of the enlisted corps, and represents its interests throughout the government, before Congress, and to the American public.

With the torch now passed to his successor, Murray is moving with his spouse to the Atlanta area, where both have extended family.

But before leaving, on June 26 Murray sat down in his almost-packed office alongside McKinley to talk to Stripes.

Murray discussed his concerns and accomplishments over the past four years, while McKinley commented on his perspectives coming into the job, and his plans for his own tenure.

The War on Terror

&#8220;And what that has meant to our airmen and their families is increased deployment tempo, combat duty, the need for [higher] readiness of the force, and more sacrifices on our families. And at the same time, the need for the support of our families has come to the forefront.&#8221;

McKinley said he&#8217;s ready to tackle the job, thanks to the men and women who make up the enlisted force.

Officials plan to channel the freed-up funds into upgrading its aging fleet of fighters, tankers and other aircraft.

The cuts come on top of the 16,500 airmen cut from the force in 2006 to meet Congressional limits.

The upcoming personnel cuts are necessary, McKinley said, because &#8220;a smaller, more lethal force&#8221; will be necessary in order to maintain air dominance in future wars.

McKinley said he is very aware that the downsizing process will be difficult on the force.

In addition to cutting positions outright, the force-shaping plan also involves moving airmen from overmanned jobs into positions &#8212; such as interpreters or military police &#8212; that are undermanned and in high demand.

To get that job done, Air Force officials intend to use programs that were resurrected during Murray&#8217;s tenure, the outgoing chief said.

&#8220;I came to the air staff here [in 2002] and helped drive us to turn back on force-shaping programs that we had abandoned &#8212; career job reservations, NCO retraining, adjustments in promotions, adjustments in high-year tenures,&#8221; Murray said. &#8220;I saw the need in having [these tools] available to us to balance the force.&#8221;

All of these rebalancing programs will be necessary over the course of the Air Force&#8217;s force-shaping program in order for the downsizing to be successful, Murray said.

However, &#8220;the first and best place to balance the force is through the CJR,&#8221; or Career Job Reservation program, Murray said.

First used in the 1990s and re-instated in May 2004, the CJR is a program for first-term airmen limiting the number of open spots in over-manned specialties.

Airmen who want to reenlist in such jobs are placed on a waiting list and &#8220;rank ordered&#8221; according to performance to compete monthly for available CJR quotas.

If an airman has not gotten a CJR in the job he or she wants by the end of the reenlistment window, he or she will have to decide whether to retrain into a shortage career field, or leave the Air Force.

McKinley, who is no stranger to involuntary retraining (he&#8217;s done it twice, see SIDEBAR), said he knows that the prospect is causing heartburn among many enlisted airmen.

The Air Force&#8217;s new focus on health and fitness is beginning to pay off handsomely, Murray and McKinley agreed.

Moreover, Air Force commanders of airmen who are deployed in the Middle East &#8220;are reporting that stamina is much greater than it was before,&#8221; despite the summer heat that can exceed 120 degrees F, Murray said.

Murray attributed the changes to the teeth in the Air Force&#8217;s fitness program, which were installed in the summer of 2003.

McKinley, who jogs, lifts weights, plays basketball and golf, said he looks forward to keeping up with his fitness routine while working at the Pentagon.

&#8220;And he&#8217;s about to enter the Air Force Eating Team and be the A-team player of it, in this job,&#8221; Murray interjected, describing the endless round of breakfasts, lunches and dinners that top military officials stationed in the Pentagon must attend in the course of their professional duties.

Born in Georgetown, Ohio, Rodney McKinley joined the Air Force in 1974 as an emergency room technician. He left the service in 1977 to attend nursing school at Saint Leo College in Florida, and then re-enlisted in 1982 as an aircraft maintainer. In 1991, he was switched to the first sergeant career field.

McKinley was serving as the command chief master sergeant for Pacific Air Forces at Hickam Air Force Base, Hawaii, when he was chosen by Air Force Chief of Staff Gen. Michael Moseley to become the 15th Chief Master Sergeant of the Air Force.

Prior to his PACAF posting, McKinley had served as the command chief master sergeant of the 86th Airlift Wing at Ramstein Air Base, Germany; the 1st Fighter Wing at Langley Air Force Base, Va.; the 379th Air Expeditionary Wing at Al Udeid Air Base, Qatar in support of Operations Enduring Freedom and Iraqi Freedom; and 11th Air Force at Elmendorf Air Force Base, Alaska.

A native of Boiling Springs, N.C., Murray entered the Air Force in October 1977 as an aircraft maintainer, the career field he stayed with throughout his 26 years in the service.

His overseas assignments included a posting at Incirlik Air Base, Turkey, from April 1984 to May 1986 as a senior F-16 Fighting Falcon crew chief for the 39th Consolidated Maintenance Squadron, and, late in his career, his assignment from September 1999 to August 2001 as Command Chief Master Sergeant, U.S. Forces Japan and 5th Air Force, Yokota Air Base, Japan.

Murray also deployed to King Faud International Airport and King Khalid Military City, Saudi Arabia, from August 1990 to March 1991 in support of operation Desert Storm, and later, to Kuwait and then to Bahrain in support of Operation Southern Watch.

Murray was serving as the command chief master sergeant for Pacific Air Forces at Hickam Air Force Base, Hawaii, when he was chosen for the top enlisted job.