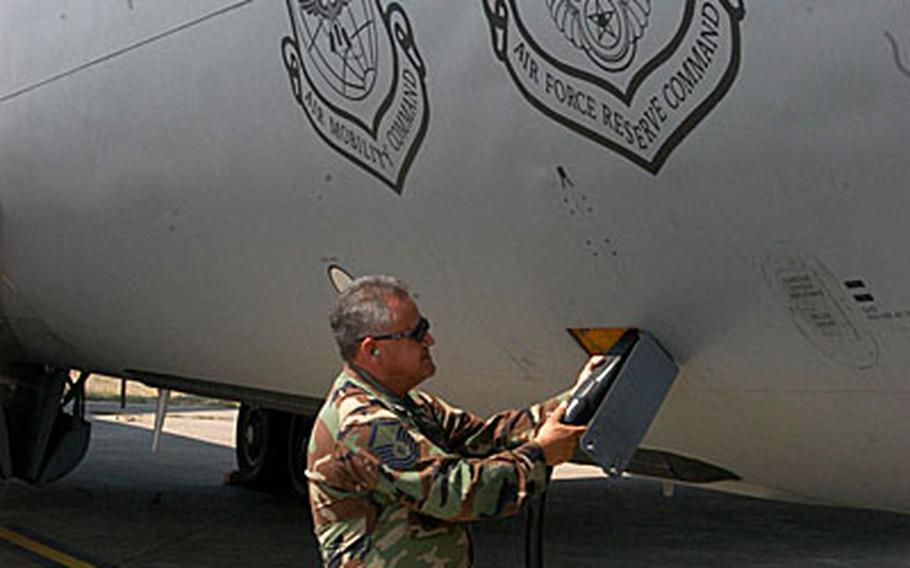 Master Sgt. Ric Ballinas disconnects an electric supply line from a KC-135 Stratotanker parked on the runway at Incirlik Air Base in Turkey. The planes routinely take to the air to refuel U.S. cargo planes over the Black Sea. (Kent Harris / S&S)

Master Sgt. Ric Ballinas disconnects an electric supply line from a KC-135 Stratotanker parked on the runway at Incirlik Air Base in Turkey. The planes routinely take to the air to refuel U.S. cargo planes over the Black Sea. (Kent Harris / S&S) 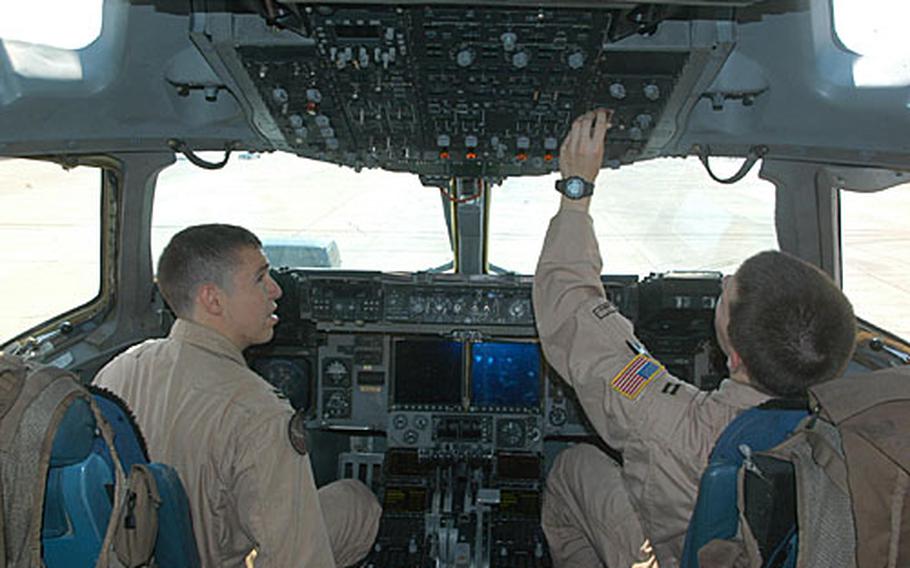 Capt. Robby Holt, left, watches Capt. Nate Walker make pre-flight checks in the cockpit of a C-17 Globemaster before it leaves Incirlik Air Base, Turkey, for a mission to Iraq. Crews typically work about 16-hour missions every other day to ferry cargo into Iraq. (Kent Harris / S&S)

INCIRLIK AIR BASE, Turkey &#8212; The faces may change after a few weeks or months. But the missions remain the same: Deliver tons of supplies downrange.

The 385th Air Expeditionary Group &#8212; composed of C-17 Globemasters, KC-135 Stratotankers and all the airmen it takes to fly them and keep them operating &#8212; has been operating out of Incirlik for a little more than two years.

Active-duty, Reserve and National Guard elements from bases around the States rotate in on tours that range from a few weeks to four months. They support two missions: the 817th Expeditionary Airlift Squadron (C-17s) and 90th Expeditionary Air Refueling Squadron (KC-135s).

Col. Joe Mancy, the 385th commander, said the C-17 operation started a 16-month rotation about a year ago. A squadron&#8217;s worth of planes and most of its personnel deploy for four months, then head back to the States for other missions until it&#8217;s their turn again 12 months later.

Crews fly about every other day on missions that take about 16 hours. Commercial aircraft start the process by bringing their loads into Incirlik. The pallets are then transferred and flown into Iraq on the C-17s. Similar operations at Manas and Al Udeid, which fall under Mancy&#8217;s command, carry more cargo into Afghanistan and Iraq.

But not all the military cargo planes coming into theater come through Incirlik. So KC-135s from Incirlik and other locations around the theater fly out to provide fuel in air before they fly to their final destinations.

Lt. Col. Mary Aldrin said most missions from Incirlik take about three hours, with the actual refueling occurring over the Black Sea. She and the rest of her squadron hail from March Air Force Base and are all reservists. Airmen in the 90th EARS generally stay for a month or less and volunteer for the assignment.

Aldrin said her squadron has pumped about 5 million pounds of fuel during its stay in Incirlik. It&#8217;s due to be replaced soon by a National Guard unit.

Mancy said though the airmen in his group serve only short tours at Incirlik, they&#8217;re welcomed by the rest of the base.