Incheon teachers see how it's done at Seoul American 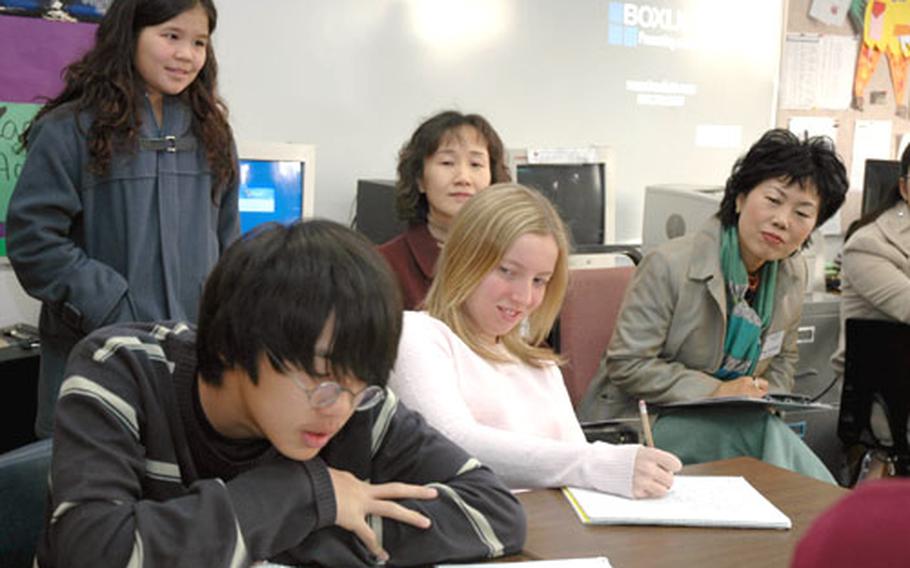 YONGSAN GARRISON, South Korea &#8212; When Steve Kennedy teaches his eighth-grade students about the elements of a story, he plays the part of game-show host more than that of a Seoul American Middle School language arts teacher.

As Kennedy shouts out the categories &#8212; irony, protagonist, plot, conflict &#8212; students race to raise their hands. The first hand up gets a chance at the definition, and if his or her answer meets muster, the contestant gets to bump another student out of the competition.

Along one corner in the room, three South Korean women watched the high-speed game Tuesday. They were a part of a group of 29 Incheon teachers and educators visiting the school to observe American curriculum and instruction in the classroom, according to assistant principal Samia Mounts.

&#8220;It&#8217;s to promote communication between the teachers from both countries,&#8221; Mounts said Tuesday of the 2-year-old exchange program organized through the United Service Organizations. &#8220;And it gives (the South Koreans) a chance to see how we do it.&#8221;

The South Korean teachers had the chance to observe four different classes, followed by a question-and-answer period in the afternoon with their American counterparts.

Jeong Eui-Jeong, an education supervisor with one of five boards of education in Incheon, said the atmosphere and the subject matter mirror that of middle school students in South Korean schools. But, she said, the teaching methods are slightly different.

After she watched Kennedy&#8217;s class Tuesday morning, she noted that the students were up and around in the room as part of the lesson. In South Korea, she said, it&#8217;s the teacher that moves about seated students.

Mounts agreed, saying that the American system relies more on &#8220;hands-on&#8221; lessons while South Koreans depend more on lectures.

Jeong said another striking difference is the teacher-to-student ratio she saw in the classes. At the school on Yongsan, the ratio is one teacher to about 22 students. In Incheon, classrooms have 45 to 50 students per teacher, she said.

But overall, she said, the classroom setting looks much the same.