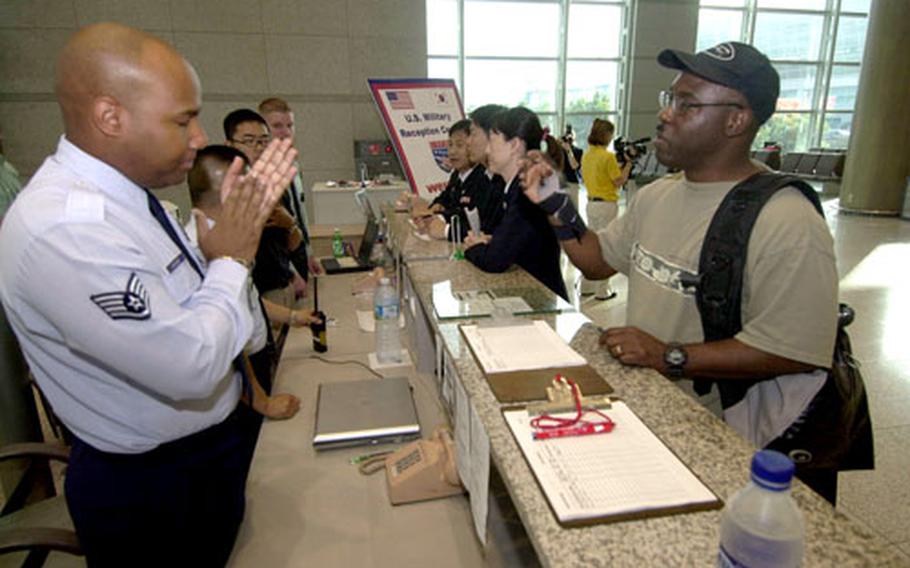 SEOUL &#8212; With Saturday being the first day that all servicemembers transferring to South Korea had to arrive on commercial flights to Incheon International Airport instead of a charter to Osan Air Base, the first servicemember off the plane had only one question.

What Air Force Staff Sgt. Michael Martel desperately wanted to know was whether his beloved Boston Red Sox had beaten the New York Yankees in the first of a three-game series.

But that reception desk is open longer hours now and has additional personnel to help with the additional troops who&#8217;ll travel through Incheon because the military canceled the chartered airline service &#8212; the Patriot Express &#8212; effective Saturday.

It&#8217;s part of a worldwide effort to save money. By 2008, the Defense Department will phase out Patriot Express service to all but five locations. Defense officials have said they lose about $67 million annually over what it would cost to move troops via commercial air.

About two-thirds of the personnel coming to Korea &#8212; around 600 weekly &#8212; used the Patriot Express. The system was ideal logistically, officials have said, because new arrivals landed on the controlled environment of a base where they could begin to in-process easily.

But U.S. Forces Korea personnel stressed that months of preparation &#8212; and command support &#8212; mean they&#8217;re ready to move the incoming personnel from Incheon to Osan, Yongsan Garrison or Camp Casey.

For one, he said, people arrive daily instead of on the Tuesday and Thursday schedule at Osan.

The welcome desk now is staffed seven days a week, from 6 a.m. to 11 p.m. More personnel are staffing the desk; for the first time, airmen are among them.

The military has no database of all arriving personnel so uniformed soldiers are stationed at each customs exit while passengers make their way to the arrivals terminal.

She said sponsors should remind incoming personnel to read the &#8220;special instructions&#8221; on their orders, which explain exactly what to do when arriving at Incheon. Debenport said officials also have added more buses to the schedule, meaning that 19 buses now take personnel to the bases daily.

&#8220;The emphasis was on quality of life,&#8221; he said, &#8220;not on the quantity of personnel&#8221; on each bus. After people make the grueling trip overseas, Debenport said, the last thing they need is to sit in the terminal for hours awaiting a bus.