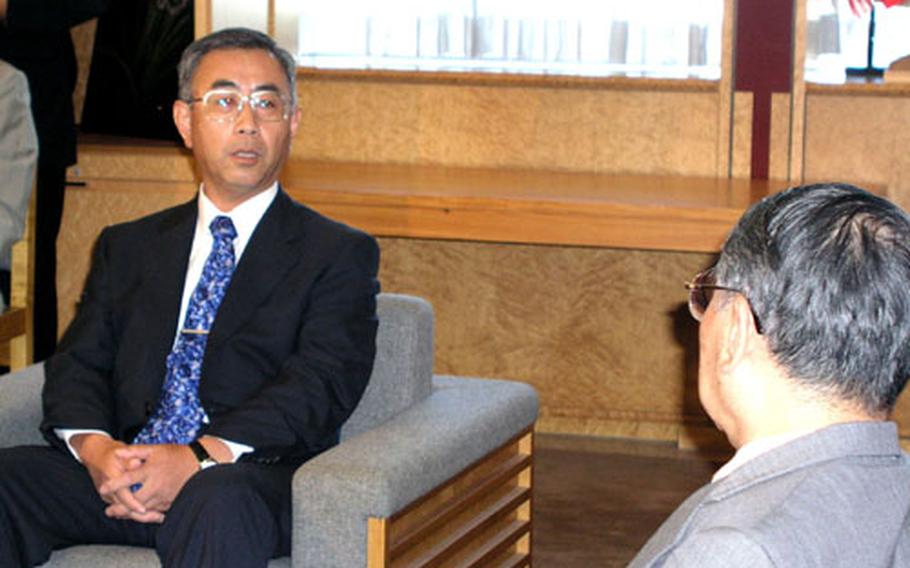 During a meeting with Shoei Yamanaka, director general of the Defense Facilities Administration Agency, in his Naha office Friday, Inamine said the accidental death of a Japan Air Self-Defense Force sergeant Aug. 31, shook the prefecture.

Senior Sgt. Takio Tamura, 53, died of massive bleeding caused by shrapnel wounds after an anti-tank rocket he was cleaning for resale at a flea market exploded in an Okinawa City junkyard.

Subsequent searches of two homes he rented in Naha turned up a stockpile of military paraphernalia, including rocket-propelled grenades and launchers, M-16 rifles, flare guns, smoke grenades, and hundreds of rounds of ammunition.

On Saturday some 500 residents of a neighborhood in the Gushi district of Naha were to be evacuated so explosive ordnance experts could defuse the rockets.

In the middle of the controversy, Yamanaka, who assumed his post last month, visited with U.S. and Japan military officials and toured bases on the island. It was a trip planned weeks in advance of the incident.

&#8220;The Self-Defense Force has been doing great job here on Okinawa,&#8221; Inamine told him in a meeting open to the press.

&#8220;In fact, I have been nothing but thankful to them for their contribution to the local communities, such as removing unexploded bombs uncovered at construction sites and transferring emergency patients from remote islands.

After World War II Okinawa was controlled by the United States until it was reverted to Japanese sovereignty in 1972.

During their discussion, Inamine asked Yamanaka to understand the prefecture&#8217;s push for reducing the &#8220;footprint&#8221; of the U.S. military on Okinawa. About 75 percent of the land used solely for U.S. bases in Japan is on Okinawa, covering one-fifth of the island.

&#8220;Under the present unsettled world situation, the number of military training has increased,&#8221; Inamine said. &#8220;But it does not mean that it is acceptable on Okinawa.

&#8220;Positive actions must be taken to move the training out of Okinawa or out of Japan completely.&#8221;