In Weiden, words can hurt you 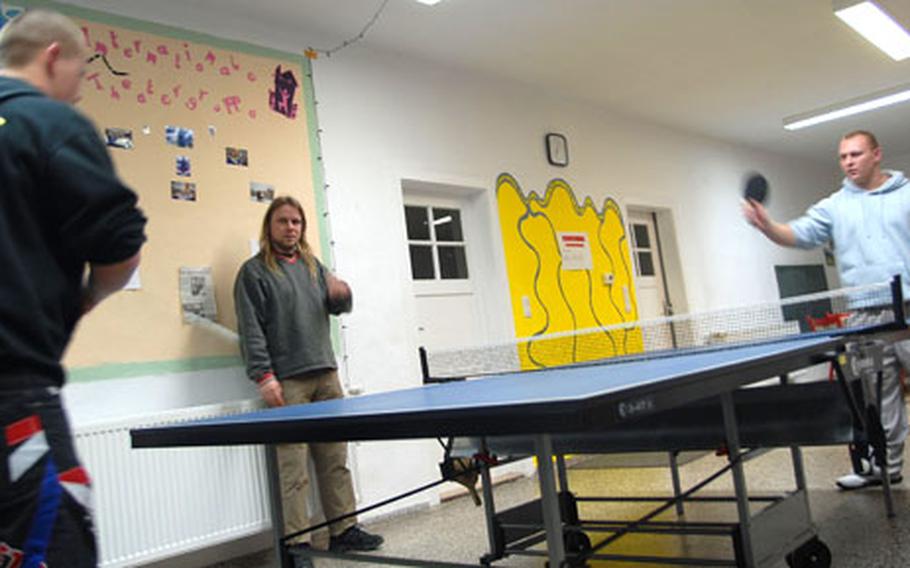 Natalia Boni (right), who moved to Grafenwohr from Kazakhstan 11 years ago, serves at customer at her shop, which sells Russian products such as Ukrainian Vodka and smoked fish near Gate 1 of the training area. (Seth Robson / S&S)

GRAFENW&#214;HR, Germany &#8212; Even in the flashing lights in Weiden&#8217;s Super Sonic nightclub it is easy to spot the U.S. soldiers with their short haircuts or off-duty uniforms of oversized sports jerseys and baseball caps.

They seem to be having the time of their lives mingling with a crowd of Germans and Russians straight out of every American&#8217;s vision of what a Euro disco should look like &#8212; scantily clad teenage girls, thin young men in designer shirts and a pair of tall blonde go-go dancers in lingerie shaking their hips on a tabletop to the hypnotic beat of techno music.

There is no sign of the violence between Americans and Russians that led the town of Weiden&#8217;s police chief to call this month for military police patrols in the area.

Super Sonic manager Rainer Fink said there have been fights between Americans and Russians outside the club but no problems inside.

Sixty to 70 U.S. soldiers hit the dance floor on an average Friday or Saturday night along with about 15 Russians and dozens of Germans, Fink said, adding that more soldiers are turned away each weekend because the club is full.

Officials from the 2nd Cavalry (Stryker) Regiment, based in nearby Vilseck, briefly placed the club off-limits last year because doormen were photocopying soldiers&#8217; identity cards. That practice has stopped, along with 10-drinks for 10-euros parties, Fink said. He said the restrictions have also been lifted.

Super Sonic staff know the names of all the Russians who come to the club and there have been no problems with them, Fink said, adding that the fights outside involve Russians denied entry to the club.

The Russians are actually ethnic Germans whose ancestors immigrated to Russia hundreds of years ago. After the collapse of the Soviet Union a reunified Germany offered incentives for the Russian Germans to return to their homeland and millions have taken up the offer.

German social worker Stephan Muller estimates about 500 Russian families live in Grafenw&#246;hr alongside a U.S. base that is garrisoned by just 1,400 U.S. soldiers but will triple in size over the next few years.

Natalia Boni, who is Russian, moved to Grafenw&#246;hr from Kazakhstan 11 years ago. Boni said she was sent to Grafenw&#246;hr by the German government as a condition of receiving benefits and German language training after she arrived in the country.

Now she is free to live anywhere in Germany, but she&#8217;s put down roots here and operates a shop selling Russian products such as Ukrainian Vodka and smoked fish near Gate 1 of the training area.

On Tuesday and Thursday nights, Russian youths hang out at a drop-in center near Boni&#8217;s shop to play table tennis.

Muller, who runs the center, said most of the Russians in Grafenw&#246;hr live near Gate 1 because that is where the cheapest apartments are.

&#8220;There are many soldiers without women here. The Russians have been here for nine or 10 years. They come to the city and it is a lot of boys together,&#8221; said Muller, who hopes to provide more sports and outdoor activities for the young Russians to keep them out of trouble.

Four young Russians who were at the center on Thursday have all had street fights with U.S. soldiers, but none bear ill will toward Americans and some even ask how they can join the U.S. military.

Russians are banned from Checkpoint, the most popular bar for Americans in Grafenw&#246;hr, he said, adding that the Russians drink at a bar called B2.

The Russians have made friends with some American soldiers. A private first class from Ukraine who joined the U.S. Army after getting a green card said he met the Russians shortly after arriving in Grafenw&#246;hr four months ago.

&#8220;I was coming out of Checkpoint and a fight was about to start and I heard somebody talking Russian,&#8221; recalled the soldier, who declined to be named.

There are fights amongst Americans and between Americans and Russians most weekends, he said, adding that most fights start because of poor communication.

Muller compared the strife between the Americans and Russians to problems he experienced in East Germany in the early 1990s when fascists and left-wingers fought bloody street battles.

Boredom contributes to the violence, he said.