In wake of thefts, learn how to keep your identity 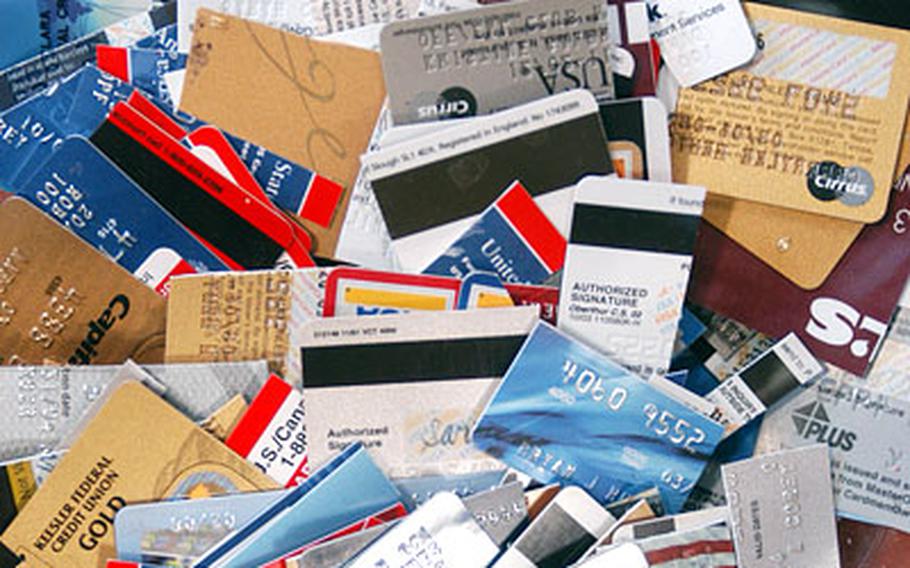 A jar of cut-up credit cards, once belonging to victims of identity theft and various other financial troubles, sit in an office inside RAF Lakenheath&#39;s Airman and Family Readiness Center. The center recently initiated an identity theft class to prevent further cases on the base. (Sean Kimmons / S&S)

RAF LAKENHEATH &#8212; Staff Sgt. Mindy Davis just wanted to buy some groceries from a store in Cambridge last month. Instead, she was unexpectedly turned away because of insufficient funds on her debit card.

Worried about the situation, she checked her Community Bank account online only to see that it had been drained of more than $1,000, with a measly $16 left.

&#8220;It came as a complete shock to me. It was really scary,&#8221; said Davis, the noncommissioned officer-in- charge of graphics inside the 48th Communications Squadron&#8217;s multi-media center.

Davis became another victim of identity theft, where thieves don&#8217;t use weapons or intimidation to steal, but obtain banking card details to purchase items courtesy of their victims.

She hasn&#8217;t been the only one affected in the local military community. Cases from base personnel, mostly hearsay, prompted RAF Lakenheath&#8217;s Airman and Family Readiness Center to start an identity theft awareness class last month.

The center looks to hold more classes quarterly throughout the year. Those interested in attending can contact the center at DSN 226-3847.

Sally Corey, a community readiness consultant at the center, advises everyone to take the 1&#189;-hour class. She knows by personal experience &#8212; she fell victim to this sort of crime last month, when someone duplicated her Air Force club credit card to make more than $1,000 in fraudulent charges.

&#8220;Folks really need to be careful. There are a lot of criminals out there,&#8221; said Corey, adding that her in-laws, who were visiting the base, and a friend at RAF Mildenhall also had fraudulent charges on their banking cards within the same week.

They haven&#8217;t been able to draw up any hard conclusions linking all the thefts together.

Lakenheath leadership recently sent out a basewide e-mail cautioning airmen of a possible phone scam, as well. According to the e-mail, a caller tries to trick the cardholder into relaying a security code found at the back of his or her banking card. The three-digit code is required in buying many things over the Internet.

If the deceitful caller succeeds, a new purchase of almost $500 is issued on the card.

In addition to reviewing financial statements and not being duped by phony callers or e-mails, airmen should also order a credit report to verify if everything is in order, especially if they are seeking a security clearance, Corey said.

There are also more ramifications to identity theft than losing money or a denied security clearance because of bad debts, insists Ed Cole, who teaches the identify theft class at the center.

In a scenario, Cole explained that someone could steal his identity and drive around in the States collecting tickets from the police in his name. And if it got really bad, a warrant could be issued for his arrest.

For tips on how to deter, detect and defend against identity theft, check out www.ftc.gov/idtheft.