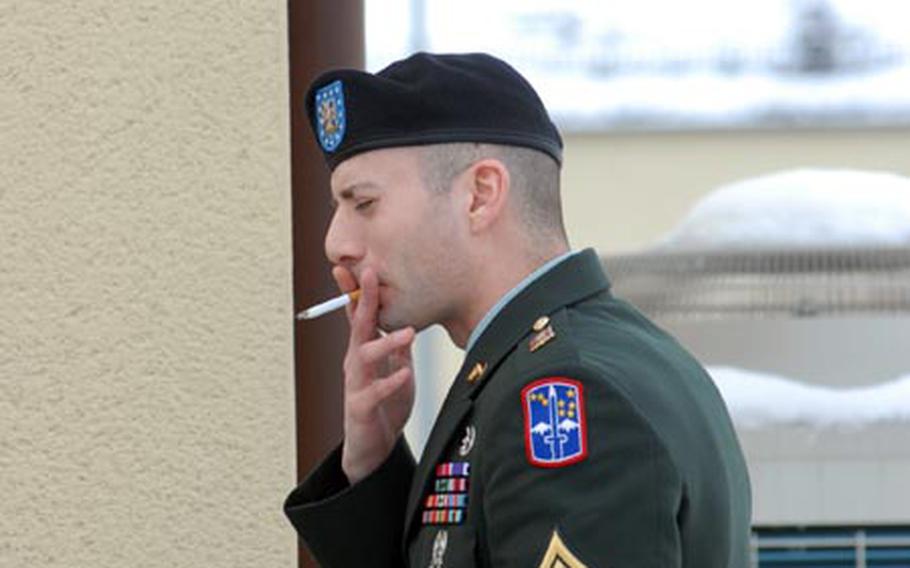 Sgt. Michael Leahy Jr. smokes a cigarette during a recess in his court-martial at Vilseck, Germany, for the alleged murder of detainees in Iraq. (Seth Robson / S&S)

VILSECK, Germany &#8212; A videotape played Thursday in the trial of a U.S. soldier shows him describing how he shot two of four bound and blindfolded Iraqi prisoners in March 2007.

The video showed Leahy confessing an hour and 10 minutes into an interview with a Criminal Investigation Command special agent in Schweinfurt, Germany.

"I shot one of them," Leahy told the agent. "I shot two shots," he said, pointing his hand like a pistol.

The prisoners&#8217; bodies were dumped in a Baghdad canal.

In the video, Leahy said the combat-related deaths of two soldiers from Leahy&#8217;s unit, Company A, 1st Battalion, 18th Infantry Regiment, shortly before the canal incident played a role in what happened.

"It tore me up inside," he said, adding that he and his comrades thought that the detainees, who they believed to be insurgents, would be released quickly.

"There are not many days that go by that you don&#8217;t think about the situation because you know it was wrong. I could sit here and list a number of reasons about why, at the time, we thought it was right. It is just excuses. Other people weren&#8217;t doing that," he said.

Later in the video Leahy tells another CID investigator how he, Company A 1st Sgt. John Hatley and Sgt. 1st Class Joseph P. Mayo led the prisoners to a canal bank, stood behind them and drew 9 mm service pistols.

"Who shot first?" the interrogator asked.

"I know it wasn&#8217;t me because I heard the first shot and then I shot," Leahy replied.

"Where did you shoot the detainee?" the interrogator asked.

At first he claimed that he didn&#8217;t know if his second shot hit one of the other detainees but after probing by the CID agent he confessed to a second killing.

"I shot the other guy," Leahy said. "The other guy was right in front of me and I shot him. I don&#8217;t think it actually killed him, although it would have later on."

The second man Leahy shot lay on the ground gurgling until Hatley finished him off with a shot in the chest, Leahy said.

Asked to describe, in detail, how he shot the detainees, Leahy said he placed his pistol six inches to a foot from one of the detainees&#8217; heads and fired.

"I saw the detainee to the right of me flinch and turn after he heard the shots and my weapon was pointed at him, anywhere from a foot to a couple of inches away. I pulled the trigger and it hit him. I&#8217;m pretty sure it was the side of the face but it could have been a little further back," he said.

The CID agent asked him how he felt after he fired the shots.

"I was scared that somebody would walk out and see it ... that we were going to go back to the [combat outpost] and people would know what we had done. ... I was ashamed of myself in a way," Leahy said.

He spoke about his job as the senior Company A medic and the fact that he trained other medics to provide the same care to detainees as U.S. soldiers.

Later in the video Leahy described a Jan. 3, 2007, incident in which Hatley shot a wounded detainee. The detainee was shot in the leg and captured after triggering a roadside bomb that damaged a Bradley Fighting Vehicle.

The badly wounded Iraqi was placed in another Bradley for transport to an Army hospital. On the way Hatley twice stopped the patrol to ask Leahy about the man&#8217;s condition, he said.

Hatley then dragged the Iraqi out of the Bradley and shot him twice in the chest with a 9 mm pistol, Leahy said. The pair put the corpse in a body bag and the patrol dropped it off at an Iraqi Police station, he said.

The defense called Col. Charles Hoge, an expert on combat stress based at Walter Reed Army Medical Center. Hoge said there are signs on the video of Leahy&#8217;s CID interrogation that suggest combat stress and lack of sleep overwhelmed his ability to make good moral choices.

Hoge referred to a point in the video where a CID agent asked Leahy why he decided to shoot the detainees.