In uniform and out, Blanks brothers preach mind and body fitness 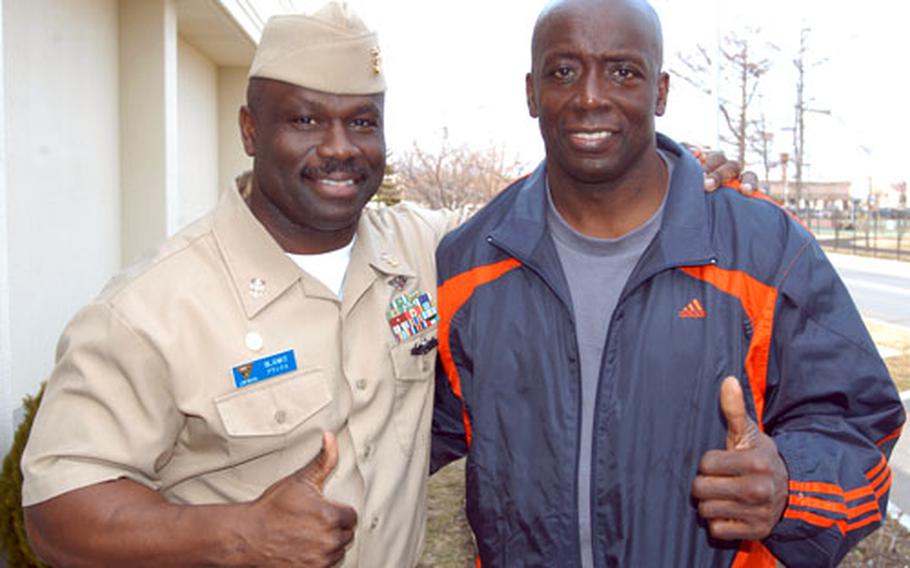 Billy trains Hollywood stars and professional athletes, has appeared in 18 movies and has sold gobs of workout videos since opening his first studio more than 20 years ago. But to Charles, he&#8217;s foremost his big brother.

Billy is bringing his Tae-Bo routine to five bases in mainland Japan this week as part of a tour sponsored by Armed Forces Entertainment, Navy Headquarters and other agencies.

The brothers, two of 15 siblings, grew up in Erie, Pa. Billy said his brothers were better high-school athletes, excelling in football and basketball. Charles, one of the city&#8217;s top running backs, landed an Ohio University football scholarship but said he left to join the Navy because &#8220;I wasn&#8217;t doing well in school.&#8221;

He didn&#8217;t tell his mother until he came home on leave after boot camp.

As Charles climbed the Navy ranks, Billy made a name for himself in the fitness world.

Hampered by dyslexia, he was shy and uncoordinated, not a star athlete like his siblings. When a neighborhood youth center opened, Billy signed up for a karate class at age 12.

The brothers have made a career out of motivating others.

Charles spent 10 of his 27 years in the Navy as a command physical fitness coordinator. He listens to what his brother says about fitness; &#8220;some of the stuff, I steal,&#8221; he jokes. He also routinely asks Billy to sign Tae-Bo workout videos for his sailors to encourage them to stay fit.