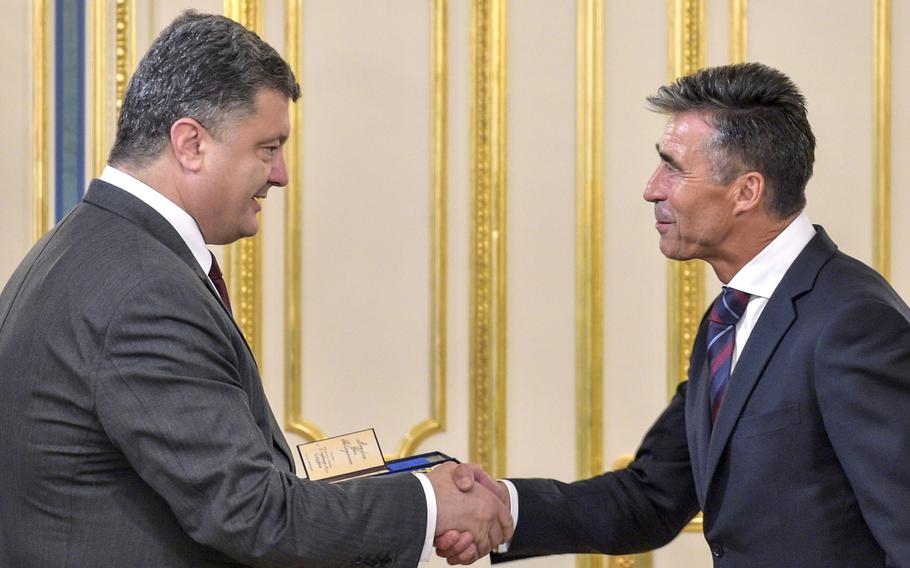 NATO’s secretary-general called on Russia Thursday to “step back from the brink” as concerns mount that Moscow might be preparing to launch an invasion into Ukraine under the guise of a peacekeeping operation.

“Do not use peacekeeping as an excuse for war-making,” Anders Fogh Rasmussen said during a news conference streamed live from Kiev, where he met with Ukrainian leaders.

U.S. and other Western officials estimate that Russia has massed some 20,000 troops near the Ukrainian border, across which pro-Russian militants have been engaged in a bloody conflict with Ukrainian government forces.

“Russia’s support to the separatists continues,” Rasmussen said. “It has intensified in scale and sophistication.”

The downing of a Malaysian airliner, killing all 298 people on board, “shows the tragic global consequences of that reckless support,” Rasmussen said. “And Russia has massed large forces on the Ukrainian border, to shield the separatists and to use any pretext to intervene even further.”

Rasmussen, who was in Kiev to meet with Ukrainian President Petro Poroshenko, said the 28-nation NATO alliance is prepared to deepen its military partnership with Ukraine, a non-NATO member.

In June, NATO defense ministers agreed to establish four special trust funds to pool resources to assist Ukraine in areas such as defense planning, command and control, logistics, and retraining retired military personnel who could assist in the current crisis.

The NATO chief also said he expects Ukraine to be incorporated into more joint NATO military drills with the goal of bolstering the country’s defense capabilities.

“We are ready to intensify this cooperation,” Rasmussen said.

Since Russia’s annexation of Ukraine’s Crimea Peninsula in March, relations between NATO and Moscow have rapidly deteriorated, bringing to an end military cooperation in counterterrorism, counterpiracy and other areas.

While Western officials have stated there is no military solution to the crisis, the U.S. and its allies in Europe have gradually increased economic sanctions on Russia, which in turn has banned imports of a number of Western food and agricultural products. Moscow has also threatened bans on flights over its airspace.

Rasmussen said he expected severe economic penalties to be imposed on Moscow if Russia launches an invasion of Ukraine.

“I have no doubt it would lead to deeper, more profound, tougher economic sanctions that would really hurt the Russian economy,” Rasmussen said.