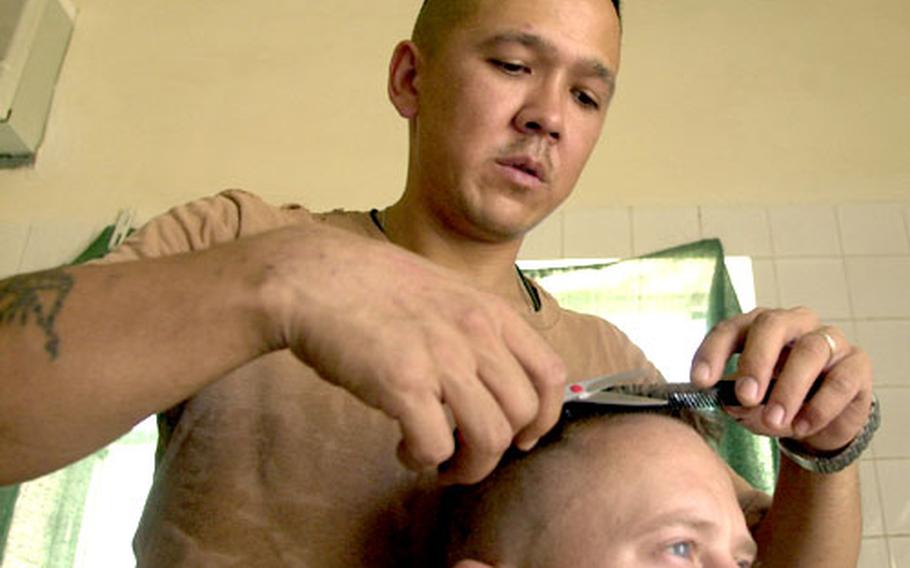 The hands of a surgeon, the confidentiality of a psychiatrist: Staff Sgt. Joseph Chapman does some tonsorial fine-tuning as he finishes up work on Capt. Joe Murdock, 855th Military Police Company. (Terry Boyd / S&S)

MEK Base, manned mostly by soldiers from Headquarters, Headquarters Troop, 2nd Squadron, 3rd Armored Cavalry Regiment, sits on a searing plain. The road from Fallujah to Ramadi, about 10 miles farther west, is one of the most dangerous in Iraq. Last Wednesday, two 3rd ACR soldiers died near Fallujah in an ambush.

Yet, there is a place on Fallujah base where tranquility reigns: J.C.&#8217;s Barber Shop.

Staff Sgt. Joseph Chapman runs J.C.&#8217;s Barber Shop out of a backroom in a vast complex that was, until the war, a base for mujahedeen fighting the Islamic republic in Iran. With few resources, Chapman has managed to turn the room into a convincing recreation of a back home barbershop, down to the clippers and the magazines.

Haircuts are $1, and all the money &#8212; including an average $4 tip &#8212; goes to a Squadron fund for a big pool party at the base, which has indoor and outdoor facilities. Chapman and Spc. Ashlea Baker, 16th Signal Company, have taken in $450 in just a couple of weeks.

But it&#8217;s not about the money. Chapman is there to give away a commodity no amount of money will buy: peace of mind in the middle of a war.

When he stops being the chemical NCO overseeing nuclear, biological and chemical protection training, he becomes Joe, the barber troubled soldiers can confide in, or vent to, with impunity. He is also an authority on all things Army.

But he knows the regs backward, forward and sideways. Even the Uniform Code of Military Justice.

Chapman always knows when soldiers are in his barber&#8217;s chair for something more than a trim.

A barber hears a lot.

&#8220;Like a psychiatrist,&#8221; said Chapman, who is a few hours shy of a psychology degree. His main function is talking with soldiers who are scared, desperate and maybe on the verge of a rash decision, &#8220;just to reassure them that everything is going to be OK.&#8221;

There is, of course, the occasional food fantasy. &#8220;The first day, a guy came in and said he just wanted a big steak instead of opening a bag to eat,&#8221; Chapman said.

But he hears serious secrets as he clips and combs. Problems with family life. Career issues. Hopes and dreams back in the world. And above all, rumor control.

He suggests courses of action, using Army speak. He carries with him the credibility of 15 years in, including deployments to Bosnia in 1996 and a year in Korea that ended just before he was sent to Iraq.

But Chapman&#8217;s main authority comes from a chain of command with only one link, though you&#8217;d never know it from his shop, or from casual conversation.

Back at Fort Hood, he and his wife run the only chapter of Christian youth organization, Approved Workmen are Not Ashamed, on a military base. AWANA members &#8220;are not ashamed to say they believe in Jesus. They&#8217;re confident and secure,&#8221; Chapman said.

Yet the by-the-book soldier doesn&#8217;t allow religion to intrude into his barbershop. On the magazine rack, there&#8217;s Elle for the female soldiers, Field & Stream for the outdoors types. Even a June copy of that bible of the secular elite, The New Yorker.

His mission is simply to lead by example. It doesn&#8217;t hurt that Chapman has a way with scissors, says workmate Baker.

Good enough to be thinking about barbering full-time after he retires in five years, along with landscaping and counseling junior-high students, Chapman said.

In the course of his seven-year barbering career, Chapman says he can&#8217;t say for sure if his counsel has ever stopped people from doing something stupid.