In Tokyo, Petraeus says world has returned to era of ‘great power rivalries’ 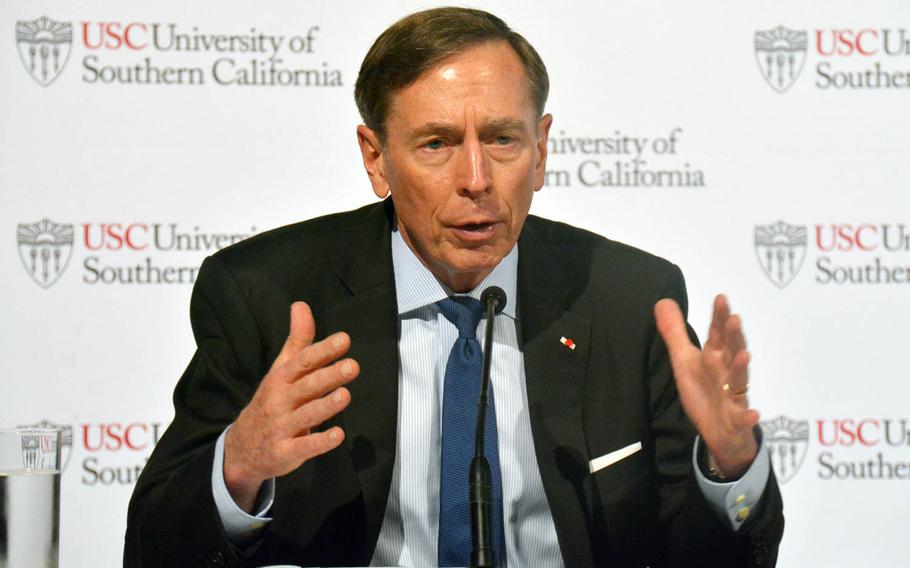 TOKYO, Japan — The world has returned to an era of “great power rivalries” not seen since the Cold War, former CIA director and retired four-star Army general David Petraeus told reporters in Japan on Saturday.

“The rise of China is a major development,” Petraeus said at a conference organized by the University of Southern California at Tokyo’s Grand Hyatt Hotel.

“China is certainly an economic superpower … and building a more impressive military with each passing year. The most important relationship in the world now is that between the United States and China.”

U.S. defense spending is still four times that of the Chinese, and American military capabilities such as aircraft carriers and amphibious ships are vastly superior, he said.

China’s help will be important for the world to deal with North Korea’s nuclear and missile programs, he added.

President Donald Trump’s support for the One China policy is evidence that there is more continuity than change in American foreign policy, said the former general who once led the International Security Assistance Force and Central Command.

“The United States, ultimately, under President Trump, has embraced the major elements of our traditional foreign policy,” Petraeus said. This includes a two-state solution to the Israeli-Palestinian conflict and reaffirming America’s defense treaty with Japan, explicitly stating that the Senkaku Islands — also claimed by China — are within the area of collective self-defense, he said.

”All the military leaders have very impressive experience on the battlefields of the post 9/11 world,” he said.

The U.S. has been rolling back the Islamic State group in Iraq and Syria and is shoring up a “fraught” situation in Afghanistan with the deployment of nearly 4000 more troops, Petraeus said. At the same time, Trump has trusted his battlefield commanders to make decisions in the field, where opportunities to act are often fleeting.

Petraeus characterized Trump’s “America First” statements as honest expressions of “any country’s desire and, indeed, responsibility … to see to its own interests,” and not indications that the U.S. won’t work in the mutual interests of allies and partner nations.

The general said he hoped America would continue to lead a rules-based international order that had “stood the world in pretty good stead since the end of World War II.”

“We should welcome Japan continuing to play an ever more active role in the world economically, diplomatically and yes, even militarily … It is, indeed, appropriate for the world’s third largest economy and an extraordinarily advanced nation to do just that,” he said.

Petraeus was involved in an extramarital affair that triggered his resignation from the CIA in 2012. He was later sentenced to two years of probation and a $100,000 fine after pleading guilty to a misdemeanor charge of mishandling classified information.