In the war zone, time is an enemy Buy Photo
Afghan boys gathered one morning last week to watch U.S. soldiers from the Third Brigade Combat Team of the 25th Infantry Division extract an IED from a dirt road in Rodat, a village in eastern Nangarhar province. (Martin Kuz/Stars and Stripes)

Buy Photo
Afghan boys gathered one morning last week to watch U.S. soldiers from the Third Brigade Combat Team of the 25th Infantry Division extract an IED from a dirt road in Rodat, a village in eastern Nangarhar province. (Martin Kuz/Stars and Stripes) 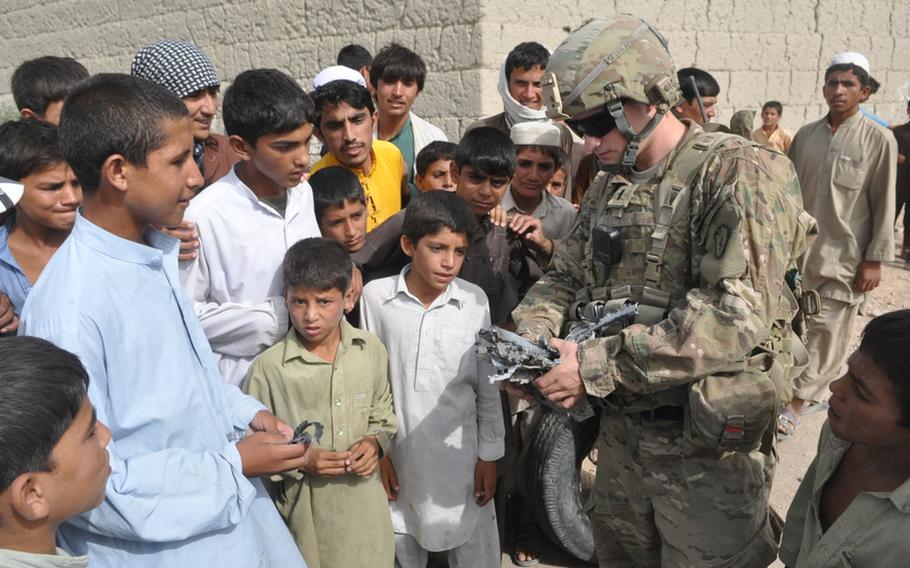 Buy Photo
Onlookers crowd around 1st Lt. Mark Ziegenfuss last week as he examined a piece of debris after U.S. soldiers removed an IED from a dirt road in Rodat, a village in eastern Nangarhar province. (Martin Kuz/Stars and Stripes) Buy Photo
Smoke from a burning fuel tanker rises above Highway 7 in eastern Nangarhar province last week. An ongoing dispute between rival tribes led to an attack on the tanker and caused Afghan security forces to close the road. (Martin Kuz/Stars and Stripes)

SHINWAR, Afghanistan &mdash; There are war zones and there are time zones. In between, there is the war time zone, an earth-bound purgatory where hours disappear in a haze of waiting and tedium that feels like something out of an Albert Camus novel.

One morning last week a U.S. platoon drove out of Forward Operating Base Shinwar in eastern Nangarhar province. The soldiers, with the 3rd Brigade Combat Team, 25th Infantry Division, left at 7:30 a.m. under a mustard-yellow sun and planned to return by noon.

They instead came back in the bruised blue light of dusk, minds and butts numb from sitting in their armored trucks during a long, unwanted detour through the war time zone.

Their day had started with an uneventful trip to Rodat, 15 miles from Shinwar, to talk with local officials about development projects in the area.

The military vehicles moved among semitrucks, passenger cars and the occasional gray-bearded man on a bicycle rolling down Highway 7, the main artery between Jalalabad and the Afghanistan-Pakistan border. They rattled past hills that looked like brown sugar and cornfields with stalks as tall as Yao Ming.

The unit pulled into the Rodat district center, a compound of squat white buildings that lies a short distance from the village bazaar. Ziegenfuss and Dale Kramer, a U.S. State Department adviser, gathered in a room with district officials to discuss ongoing construction of a school.

Hanging on a wall was a clock that had stopped, its hands frozen at 10 minutes to 5.

Did somebody say omen?

Thirty minutes into the meeting, a soldier stepped into the room and spoke quietly to Ziegenfuss. The lieutenant stood up. Hurried handshakes ensued.

Hearing the news, Kramer, who after years of working in Afghanistan possesses an almost biblical patience, offered a dour prophecy. &ldquo;Get ready to be in the truck for a while,&rdquo; he said.

The soldiers had arrived at the district center via a dirt road that weaves through the bazaar. Now they headed back to reach the scene of the suspected IED.

Ziegenfuss called in an explosive ordnance disposal team from Shinwar to investigate. The waiting began.

The platoon&rsquo;s trucks blocked traffic in and out of the bazaar. Dozens of young boys sat in the shade of a mud-brick wall about 100 yards away to watch. An hour ticked by.

The EOD crew showed up. They steered a pair of remote-controlled robot cameras toward the IED site to scan it. Another hour lumbered past.

One of the team&rsquo;s members waddled out in a bulky blast suit to examine the bomb. He dropped to his knees and pawed at the dirt.

The Comanche Green soldiers stared from inside their idling trucks. The early afternoon heat made the air outside appear thick and sinuous.

The EOD soldier stood up and retreated to his vehicle. Ziegenfuss explained that the team would detonate an explosive charge to create a larger hole to make extracting the IED easier.

Yet another hour evaporated. The charge exploded. Inside the trucks, the blast sounded not much louder than someone punching a pillow.

The EOD team removed the IED &mdash; an artillery shell packed with about 50 pounds of explosives &mdash; and drove off to detonate it. Ziegenfuss and a few other soldiers stepped out as boys from the village rushed toward where the IED had been buried.

The EOD crew reappeared. It was midafternoon by the time they and Comanche Green turned onto Highway 7 for the return to Shinwar.

The trip should have lasted no more than a half-hour. But less than halfway there, the soldiers saw black smoke staining the sky about a half-mile ahead.

Details arrived by radio. A running dispute between rival tribes in the area had led to an attack on a fuel tanker earlier in the day. The ANP reacted by closing the road.

Ziegenfuss and Sgt. Robert Herrmann judged the feud an Afghan affair and decided to leave the highway.

&ldquo;This is something for the ANP to control,&rdquo; said Herrmann, 36, of Normalville, Pa. &ldquo;We&rsquo;re going to keep moving.&rdquo;

Their alternate route was a tight, unpaved road skirting a canal. The trucks slowed to 5 mph, sometimes less. An hour dissolved, then a second.

Crowds of boys sprouted along either bank as the trucks inched past. Some waved. Some hurled stones that struck the vehicles with a muted thud.

The moon hadn&rsquo;t quite yet shown its ivory face when Comanche Green rumbled into the base almost 12 hours after departing.

The soldiers climbed down from their trucks. They were free of the war time zone. For now.