In the Pacific, a different kind of transformation taking place 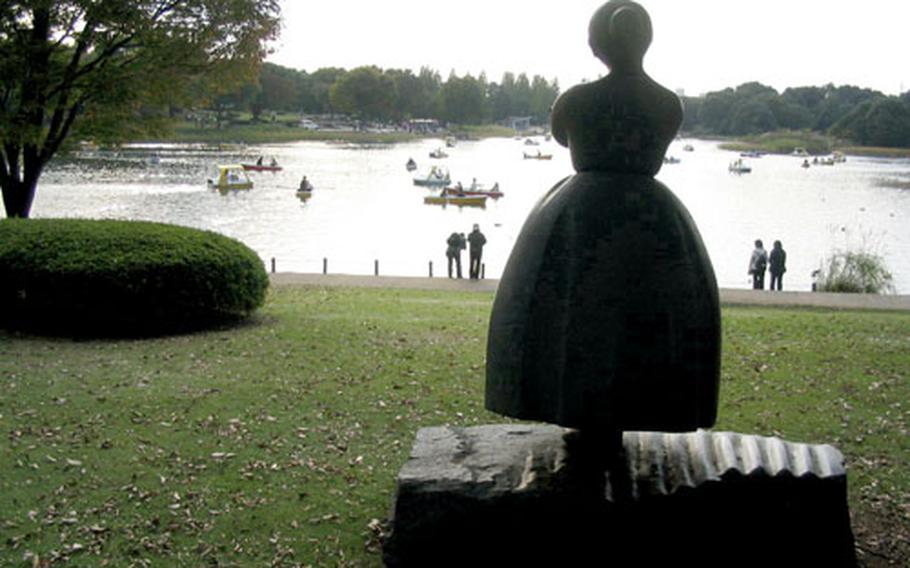 A sculpture looks over a lake crowded with boaters at Showa Kinen Park in Tachikawa, Japan, not far from Yokota Air Base. The park is on land that once was Tachikawa Air Base but was returned to Japan in November 1977. (Stacy Chandler / S&S)

A sculpture looks over a lake crowded with boaters at Showa Kinen Park in Tachikawa, Japan, not far from Yokota Air Base. The park is on land that once was Tachikawa Air Base but was returned to Japan in November 1977. (Stacy Chandler / S&S) A DC-3 takes off at Tachikawa Air Base in this undated photo taken in the 1960s. (Courtesy of the Yokota High School Alumni Association) 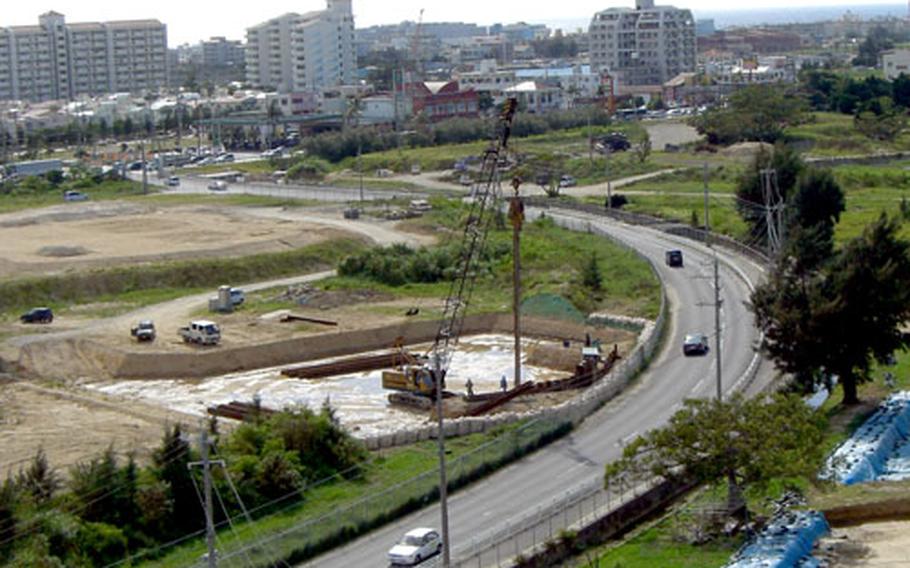 Decades ago, U.S. troops slugged it out with enemy forces in Japan, Okinawa and Korea, eventually establishing bases that would support America&#8217;s efforts in Vietnam and the Cold War and help provide regional stability in peacetime.

But needs change with the times, and as the U.S. military transforms to meet modern challenges, it returns land it no longer requires to host nations.

Then another kind of transformation question arises, this time for the host nation: What to do with the returned land?

Eventually, former base properties find new roles, often to the benefit of the host nation and Americans living there alike.

From bustling base to serene parkThe former Tachikawa Air Base, a short drive from present-day Yokota Air Base, was handed back to Japan in November 1977. The land now is divided into the Japan Ground Self-Defense Force&#8217;s Tachikawa post and the national government&#8217;s Showa Kinen Park.

According to Yokota&#8217;s historical office, the Japanese Imperial army opened Tachikawa Airfield in November 1922. During World War II, the Japanese military built and tested airplanes there. U.S. Army Air Forces elements moved onto the base in September 1945.

From the start, Tachikawa was a major airlift hub for material and logistics missions in the Pacific. The first U.S. military dependents arrived in August 1946 and construction of family housing and other support facilities remained brisk until 1948.

By early 1955, Tachikawa appeared on the verge of becoming the largest U.S. air base in Japan. But that May, a plan to extend the runway encountered extreme local opposition. So in late 1968, U.S. Forces Japan scrapped plans and instead focused on Yokota. Tachikawa personnel began moving to Yokota in 1969 as flying operations were phased out over the next eight years.

Today, the land is now home to the JGSDF complex, which houses several Japanese government and municipal offices as well as serving as a defense forces hub. It would be a central base for relief activities in the event of a large-scale disaster in Tokyo.

But the land is more widely known today for Showa Kinen Park, which opened in 1983. Covering 444 acres, the park has an abundance of greenery and open spaces with features like gardens, bridges, pathways, a lake, pools, fountains and a sports area that attract about 2.5 million visitors a year, many of them Americans from nearby Yokota.

From war platform to place of peaceA servicemember returning to Okinawa after a decade&#8217;s absence is bound to become disoriented, finding a Ferris wheel and shopping centers where airfields and firing ranges used to be, or a Buddhist retreat where nuclear-tipped cruise missiles once targeted Beijing.

That&#8217;s what 40 acres on a hillside overlooking the East China Sea in central Okinawa have become, thanks to the leader of Japan&#8217;s Soka Gakkai Buddhist sect and some stubborn concrete shelters.

At the height of the Cold War, the United States constructed 32 launching pads for cruise missiles on the island, which was under U.S. control from the end of World War II to May 1972. Housed in hardened shelters, the missiles were deployed in Okinawa beginning in 1961.

They were withdrawn in 1966 and the base was closed. In 1977, Soka Gakkai bought the property in Onna for a retreat and conference center.

At first, the Buddhists were torn over what to do with the concrete bunkers the U.S. Army left behind.

&#8220;The missile emplacement was, in fact, an eyesore to us, especially since we aspire to create a world of lasting peace,&#8221; said Hitoshi Taira, an area Soka Gakkai leader.

&#8220;We decided to demolish the launching pads, only to find that it was an impossible task. The well-built fortress and nuclear shelter were too formidable.&#8221;

In 1983, Soka Gakkai International President Daisaku Ikeda visited the site and was inspired to turn the former platform for war into a place of peace.

Today, the former missile bunkers stand as a museum and storage for the group, and the grounds are an open area where everyone is welcome to visit, picnic and meditate.

Other former U.S. base property on Okinawa has been developed with an eye toward boosting the economy.

Later the area was expanded to what is now known as the American Village, the northern anchor of the business zone.

From 1991 to 2002, the economic impact of the business meccas &#8212; with two malls, dozens of restaurants and a giant Ferris wheel &#8212; was 81 times what the landowners once received in base leases, according to a town report.

American Village alone generated jobs for about 2,900 people, Sakumoto said. About 8.3 million shoppers, many of them Americans, visited the district annually, spending $173.6 million a year.

But not all installation returns are success stories. At least not at first.

For example, in Naha, the prefectural capital of Okinawa, a vast undeveloped area that once contained military family housing marred the city center for more than two decades. The 474-acre Makiminato Housing Area fell victim to poor planning and only recently is being developed.

From vital bases to new potentialU.S. Forces Korea has been in the process of closing many military bases and eventually will shift the bulk of its troops to two regional hubs in Pyeongtaek and the Daegu-Busan region.

In all, USFK plans to return 59 installations to South Korea, said Army Col. Daniel Wilson, USFK engineer. Totaling 33,000 acres, the installations are valued at more than $1 billion and will be handed back within the next four years.

Of the 59 installations, 23 already have been returned under a process that began in 2002.

According to media reports, some tracts will be sold for commercial development, while others may be turned into parks or other public-use facilities.

In 2003, USFK returned a 2.7-acre compound adjacent to Yongsan Garrison that had served as a motor pool. According to Wilson, it sold for $40 million.

In 1992, USFK turned over a parcel at Yongsan that had been the 8th Army&#8217;s golf course, in response to requests from the South Korean government for land that could be turned into green space for its citizens.

The South Koreans built Yongsan Family Park on part of the land but then decided it was a good spot for their national museum, Wilson said.

The National Museum of Korea, which opened last October, now dominates the landscape and is said to be the largest museum in Asia and the sixth-largest in the world.

Plans for the future

KoreaU.S. Forces Korea is scheduled to hand over 635-acre Yongsan Garrison in 2008, and South Korea plans to use the tract as an &#8220;anchor point for a national park they&#8217;re going to create in the garrison space,&#8221; said Army Col. Daniel Wilson, USFK engineer.

But the future of the Yongsan Garrison site already has run into political controversy between South Korean national and local governments.

The public long has discussed turning the Army post into a public park and South Korean authorities say they intend to preserve the land as park space once the installation is handed back. Seoul&#8217;s recently elected mayor, Oh Se-hoon, campaigned on a pledge to someday convert Yongsan Garrison into public green space.

But in late July, South Korea&#8217;s Ministry of Construction and Transportation announced a proposal that would reserve only part of the garrison site for parkland. Another chunk would be offered for commercial development of businesses and high-rise residences.

Oh blasted the ministry&#8217;s proposal and accused the national government of ignoring the wishes of Seoul residents. He called on the national assembly to ban the government from changing plans for future use of the land.

JapanIn September 2004, U.S. and Japan agreed to return six Navy facilities in Yokohama in exchange for 700 additional units at the Ikego Housing Area outside Yokosuka Naval Base. One of the steps in that plan was the return of part of the Koshiba Petroleum, Oil and Lubricants Depot, which was put back in Japanese hands last December.

The land under the 2004 agreement &#8212; 929 acres collectively &#8212; constitutes the largest property return in more than three decades on mainland Japan. It represents more than 70 percent of all U.S. military land in Yokohama.

Based on project and committee proposals, the city produced a guideline in June detailing possible future uses of the former U.S. facilities. Among its recommendations are a regional disaster relief base, educational institutions, parks and industry.

The U.S.-Japan Roadmap for Realignment, released in May, calls for portions of the Army&#8217;s Sagami General Depot and Chapel Hill housing area at Camp Zama to be returned to Japanese control as well. Sagamihara officials have set up a project group and are currently discussing the issue, said Shigeru Kobayashi, the city&#8217;s foreign affairs division chief. The city hopes to have a rough idea of the plan by the end of March, he said. One key hope is to fulfill a long-standing plan to extend a train line through the depot land.

OkinawaChatan now is concentrating on developing Camp Lester property. The base&#8217;s northern portion was returned in 2004 and the rest should be handed over by 2011.

&#8220;Our new urban development projects will determine the future of our town,&#8221; said Morimasa Sakumoto, assistant chief of Chatan&#8217;s planning section. &#8220;However, many unforeseeable obstacles have gotten in the way.&#8221;

A large amount of jet fuel was discovered during excavation of a section in the camp&#8217;s northern part in 2005 and the discovery of a 7,000-year-old shell mound has required an extensive archeological examination.

Elsewhere on Okinawa, the realignment road map includes plans to return Camp Kinser once some 8,000 Marines and their families are transferred to Guam by 2014.

The Naha Chamber of Commerce and Industry and other groups already have started mapping out plans for redeveloping the base&#8217;s 676.6 acres. Hirokazu Nakaima, the chamber&#8217;s chairman, has said the areas are ideal for several different kinds of development &#8212; a retirement haven, a casino and resort area, or a district for information technology companies, for instance.