In the dead of night, essence of a memorial is revealed 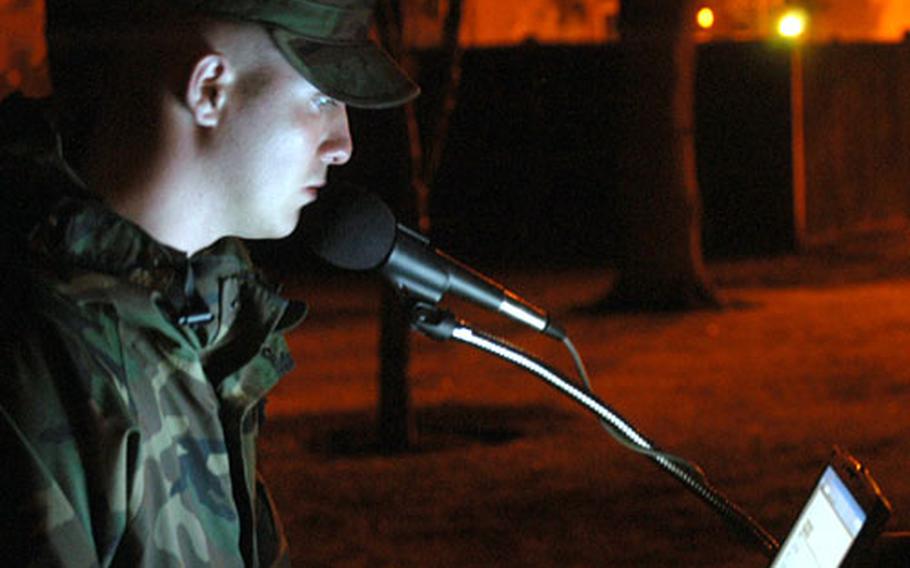 Taking a 15-minute turn in reading from the long list of American servicemembers who have been taken as prisoners of war or been listed as missing in action since the end of World War II, Airman 1st Class Jason Hitchcock from the 352nd Maintenance Squadron calls out names early Friday morning at RAF Mildenhall. (Ben Murray / S&S)

Taking a 15-minute turn in reading from the long list of American servicemembers who have been taken as prisoners of war or been listed as missing in action since the end of World War II, Airman 1st Class Jason Hitchcock from the 352nd Maintenance Squadron calls out names early Friday morning at RAF Mildenhall. (Ben Murray / S&S) Airman 1st Class Vanessa Parks from the 352nd Maintenance Squadron stands vigil in a steady drizzle early Friday morning under a flag flying at half staff for the nearly 10,000 servicemembers who have been prisoners of wars or missing in action since the end of World War II. The 24-hour vigil is part of RAF Mildenhall’s week of commemorative events to honor POWs and servicemembers still missing in action. (Ben Murray / S&S)

MILDENHALL, England &#8212; Hours after the military pomp and formality that opened one of the most somber events of POW/MIA Remembrance Week at RAF Mildenhall and RAF Lakenheath, the 24-hour vigils at the bases were reduced to their true essence.

In a persistent wind and bone-chilling rain, airmen stood in the middle of the night reading the names of the nearly 10,000 American servicemen missing or imprisoned in post-World War II conflicts.

Lacking even basic comforts for the readers, the lonely hours of the vigil were as important as any piece of the pageantry scheduled on the eve of National POW/MIA Recognition Day, volunteers at Mildenhall said.

Even if no one was listening, it was important to speak the names one by one, readers said.

The week of remembrance events included a run, a luncheon and a &#8220;motorcycle safety ride.&#8221;

But the recitation of the list is a budding tradition at U.K. air bases, organizers from the two posts said. It&#8217;s an effort that requires hundreds of volunteers to read names in shifts. By about 1 a.m. early Friday morning, there was no sign of flagging among the Mildenhall readers.

Propped up by coffee and donated pans of brownies, snacks and pizza, volunteers continued to arrive in pairs throughout the night to take turns reading names and standing silent watch over a display of four hats &#8212; one from the uniform of each branch of the military.

New Mildenhall wing commander Col. Michael Stough, a participant in the formal procedure that opened the vigil, also returned at about 3 a.m. to read several shifts.

Mildenhall organizer Master Sgt. Dalton Edwards from the 100th Maintenance Squadron even planned to stay for the entire 24 hours, until the vigil ended with a closing ceremony Friday.

Having already read for several shifts in the blustery cold, Edwards said the thought of what many men on the list must have suffered through was enough to push away the slight discomfort of standing still in the rain.

Over at Lakenheath, vigil organizer Staff Sgt. Yvette Taylor said she was just hoping passers-by would &#8220;remember and recognize the sacrifices these people made.&#8221;