In tangle with rebar, Marines in Iraq improvise quick solution 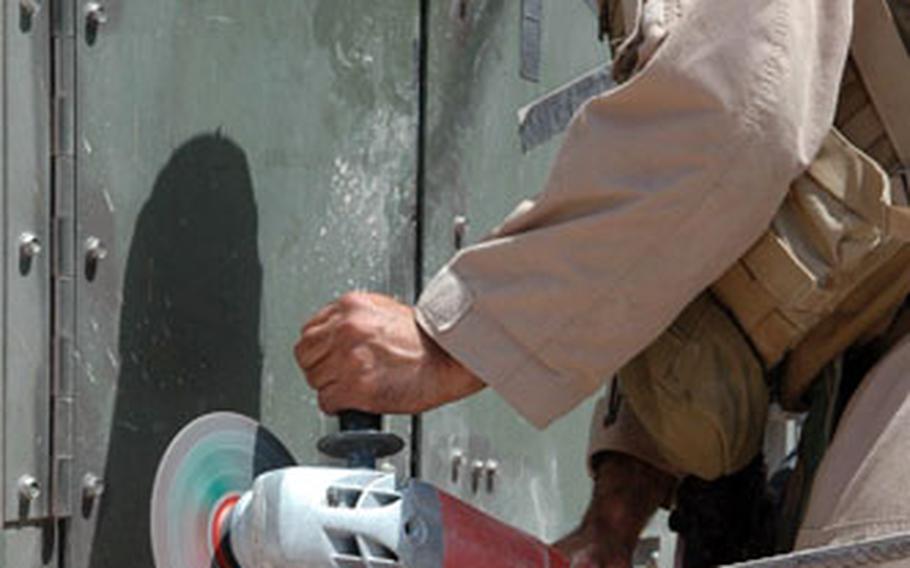 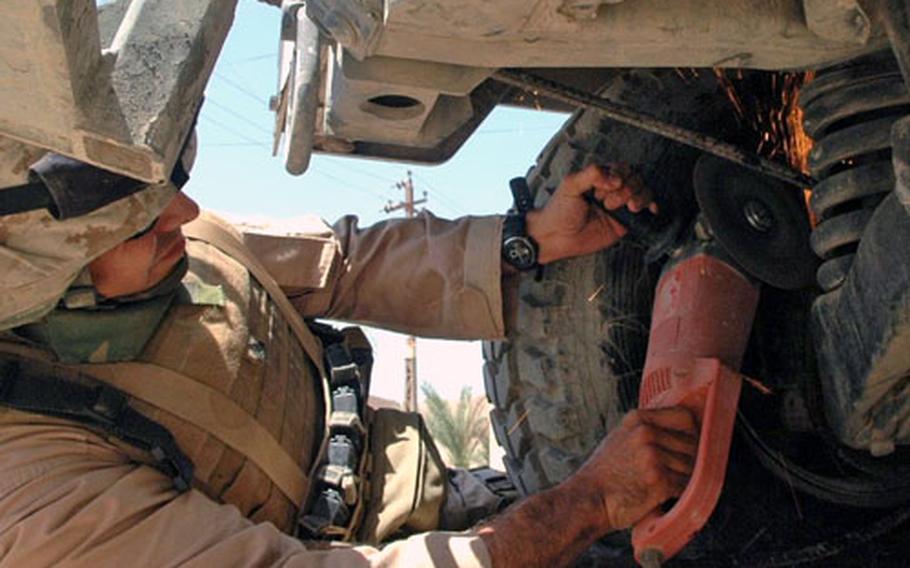 Marine Cpl. Brian Tomsovic uses a circular saw underneath a Humvee to cut off a length of rebar that had wrapped around the vehicle’s axle in Fallujah recently. (Monte Morin / S&S)

Like some bizarre, metal-work puzzle, an enormous length of metal rebar had wrapped itself around the rear axle of the high-backed Humvee and left both ends sticking out whip-like beneath the rear bumper, like huge cockroach antennae.

The Marines&#8217; frustration grew from moment to moment as they studied the rebar. It was too thick for bolt cutters, and it would definitely cause problems for them to drive back to camp with it hanging on like that.

&#8220;How are we going to get that off? We&#8217;re going to have to take the wheel off,&#8221; one Marine said plaintively as others from 1st Platoon, Weapons Company scanned the windows and rooftops for snipers.

As Tomsovic trotted over to the crew of Iraqi laborers, a fellow Marine expressed his doubts with sarcasm. &#8220;Oh yeah, we&#8217;ll just wait right here while you find a saw and a blowtorch.&#8221;

The troubled vehicle belonged to the 1st Battalion, 25th Marine Regiment, or &#8220;New England&#8217;s Own.&#8221; The reserve infantry unit, which is made up of companies throughout America&#8217;s Northeast, is responsible for keeping the peace in Fallujah, a one-time insurgent stronghold.

On this particular day, 1st Platoon was busy patrolling the narrow streets of &#8220;The Pizza Slice,&#8221; a contentious swath of western Fallujah shaped like a pizza wedge. The patrol had wheeled into an open area strewn with smoldering trash and piles of rebar and the ends of the metal rods rolled over them.

Beside the clearing was one of many new apartment buildings under construction in Fallujah. A crew of Iraqis dusted in fine white powder stood out front by a gas-powered generator. Tomsovic figured they should have some useful tools. When he came running back to the high back, he was wearing a wide grin.

Within moments Atwood had pulled the vehicle over to the work site and Tomsovic was using the electric circular saw to unravel the metal knot. The blade emitted a shower of sparks that flew into Tomsovic&#8217;s face as he crawled beneath the Humvee and cut the metal rod in several places.