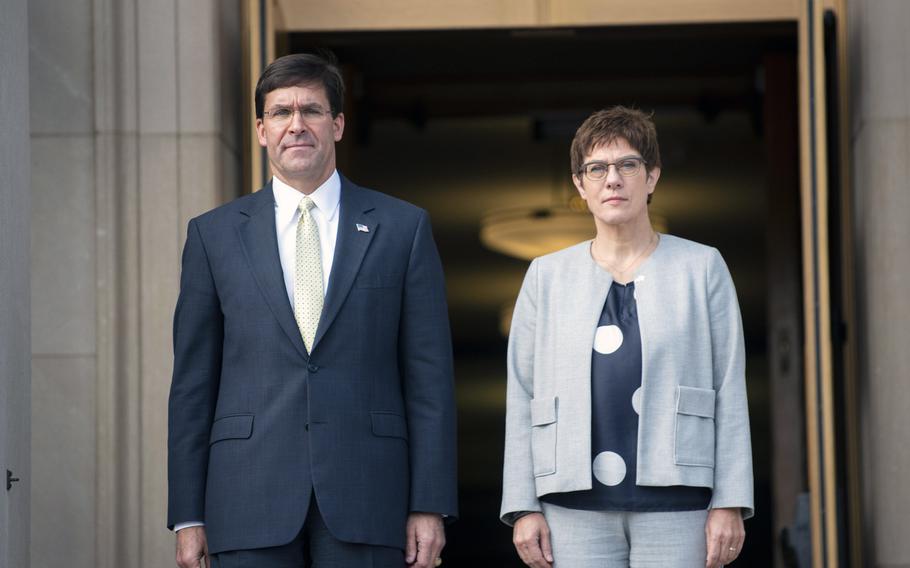 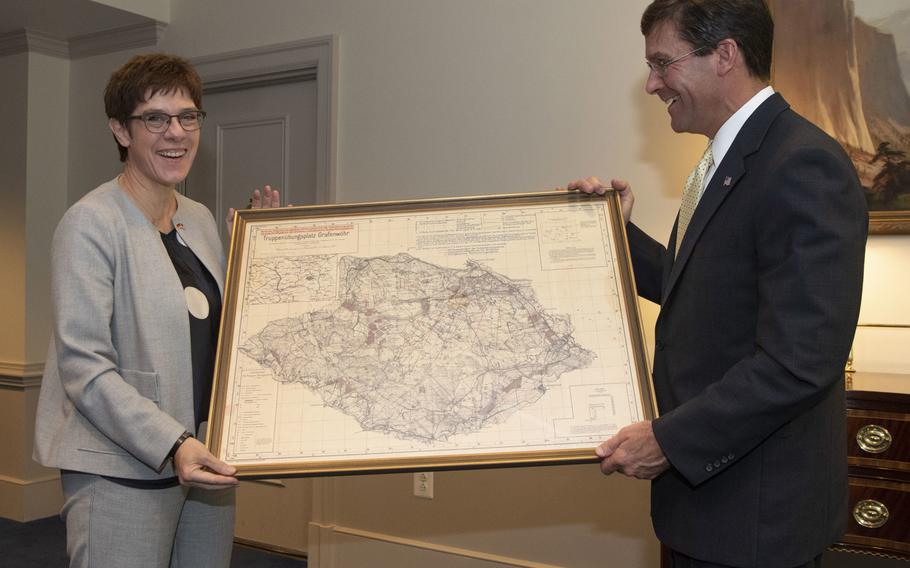 STUTTGART, Germany — When the new U.S. and German defense chiefs held high-level talks in Washington this week, Defense Secretary Mark Esper wasted no time getting to his main point — the dollars and cents of defense spending.

After welcoming German Defense Minister Annegret Kramp-Karrenbauer to the Pentagon Monday with an honor cordon, Esper spoke of the need for Berlin to play a larger role on the world stage “in this era of great power competition.”

“And that, of course, begins with investing much more in defense,” Esper said as he addressed his counterpart in front of media assembled at the Pentagon.

“With the largest economy in Europe, we believe Germany’s in a strong position to make the investments needed to bolster the capabilities of and help lead the alliance,” Esper said.

Germany’s defense spending has dominated the U.S.-German relationship since President Donald Trump’s election in 2016, and was the focus of the talks between Esper and Kramp-Karrenbauer, for whom the trip to the Pentagon to meet her American counterpart was her first overseas mission as defense minister.

Esper, like defense secretaries Jim Mattis and Pat Shanahan before him, applied the usual pressure.

“I look forward to our conversation today, as we discuss opportunities to make these investments, to increase burden-sharing, to strengthen the alliance, to improve readiness and to recommit to defending a rules-based international order,” Esper said.

Kramp-Karrenbauer said she was in favor of higher German defense spending, which currently is less than 1.5% of gross domestic product. After Russia invaded eastern Ukraine and annexed Crimea in 2014, NATO formally made it a goal for member states to spend at least 2% on defense.

Four countries, including the U.S., already met that goal and pledged to maintain defense spending, while member states that fell short said they would endeavor to reach the mark within 10 years.

Germany’s critics say the country still doesn’t have a clear plan to meet the deadline.

“I also want to make clear that we do stand by our commitment that we have made in the NATO framework — for example, when it comes to financial burden-sharing and developing military capabilities,” Kramp-Karrenbauer said after Esper’s remarks, repeating a pledge she made in a speech in July when she became defense minister.

At the time, however, the country’s defense budget plans would only see spending reach 1.5% by the 2024 deadline, Germany’s Deutsche Welle reported.

Kramp-Karrenbauer is likely to face obstacles in pushing Germany closer to 2%, given political disagreement in Berlin over whether such increases are needed.

The meeting between the German and U.S. defense leaders came less than three months before NATO heads of state gather in London for a summit marking the alliance’s 70th anniversary. As he’s done at previous summits, Trump is expected to make burden-sharing and defense spending central issues of the meeting.

Even as Esper drove home the message that Washington wants Berlin to spend more on defense, he also thanked Kramp-Karrenbauer for Germany’s hosting more than 30,000 U.S. servicemembers. Esper, a former soldier once stationed in Vicenza, Italy with the 173rd Airborne Brigade, frequently trained at the U.S. Army ranges in Hohenfels and Grafenwoehr.

“I got to know the German people and it was a wonderful experience for me,” Esper said.

While Trump in recent months has hinted that he was considering pulling some U.S. forces from Germany in favor of Poland, Esper did not address the matter.