In Taegu, boxing ring is the thing 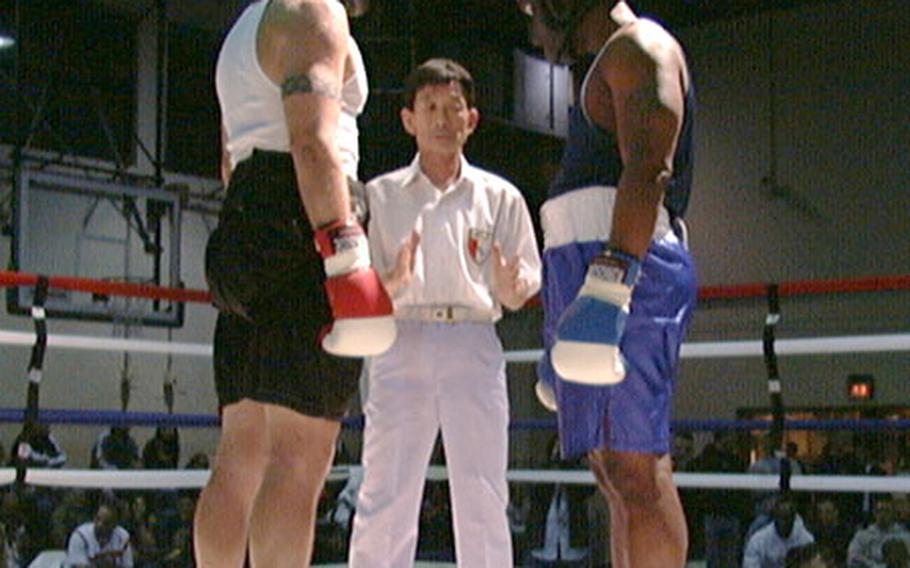 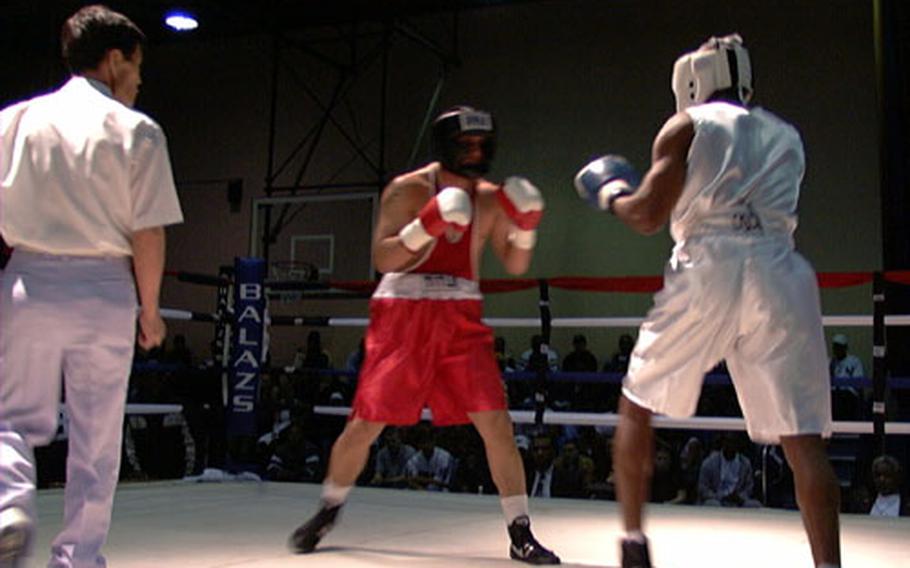 The new Army boxing program for lower South Korea drew the biggest turnout in memory for any event held at the Kelly Fitness Center gym, organizers said, with the crowd building to several hundred despite minimal pre-fight publicity.

With thumping hip-hop echoing around the high-ceilinged gym and the voice of the announcer booming over the mike, the crowd roared its enthusiasm for the boxers who squared off in a ring decked with red, white and blue bunting.

There were four bouts in all, each bout three rounds of two minutes each.

The fighters were in weight classes ranging from the lightweight 140 pounders all the way to two superheavyweights at about 216 pounds. Three of the bouts were between male opponents, one between females.

Seated at tables around the ring were judges, the timekeeper and a team of Army medics on hand in case anyone was hurt.

There were no injuries to speak of. One fighter was handed an ice pack for a sore arm just after her bout. And medics peered into the face of one fighter who had a very small cut.

Before each bout, the fighters climbed through the red, white and blue ropes to be introduced by the announcer, Darryl Chandler, a tall man in a blue blazer, necktie and light-colored slacks.

Then the fighters were in the hands of the seasoned referee, Kim Yong-ok, a short, trim middle-aged man who would bring both fighters to center-ring, spell out the ground rules and signal the bell.

Each of the four fights had its own distinct character, and the crowd was quick to spot the weaknesses and strengths in how the fighters performed.

The first bout was in the lightweight category, and it was evident to the crowd that the two fighters had mostly spent themselves in the opening minute or so.

Both made an aggressive start, launching strong salvos in the opening minute or so. Both kept up the fight, but as the seconds ticked by, both seemed to be fighting on low batteries, with blows sometimes landing with little force. And at some points the fighters seemed too tired even to counterpunch.

The second bout &#8212; one that got the crowd wild with excitement &#8212; was the women&#8217;s novice fight, in which Veronica Cruz outpointed Yvonne Fierro in all three rounds.

For all the excitement over the women&#8217;s bout, the go-crazy index rose several points when Chandler announced the third bout &#8212; a middleweight fight between Johnny Dockery and Robert Flores. Though the judges gave Flores the third round, Dockery outpointed him in the first and second to win the fight.

But as spectators agreed later, the peak of boxing excitement came at the end, when two big fighters climbed through the ropes for the final bout: the battle of the superheavyweights.

David Sharp, at 216 pounds, beat Andre Johnson, 215 pounds, with judges giving Johnson the first round but Sharp the last two.

The fighters flew about the ring, landing blow after blow that made hard smacking sounds even though the gloves were slamming into the opponents&#8217; cushioned headgear.

Neither was afraid to close with the other, and each connected numerous times. At one point, Johnson fired a straight right at Sharp&#8217;s head, but Sharp saw it coming and evaded it with a quick sidebend at the waist.

After their bout both men hugged and smiled, and their eyes had a look not of hostility but rather friendliness and mutual respect.

&#8220;I think it turned out to be very successful,&#8221; Melvin Gaither, chief recreation officer for the Army&#8217;s 20th Support Group, said of the fight debut. The 20th SG is sponsoring the boxing program for Area IV, the Army&#8217;s lower South Korea military district.