In South Korea, it takes a village to teach a child English 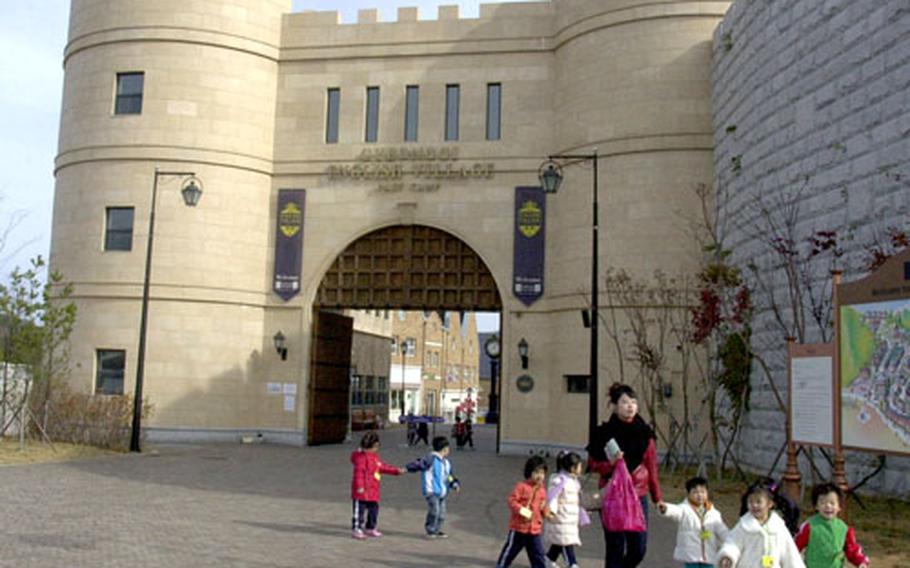 PAJU, South Korea &#8212; Ten minutes from the Imjin River and a broad swath of North Korea&#8217;s barren mountains, a replica of Stonehenge stands next to a medieval English castle fa&#231;ade.

Walk through the castle entrance and San Francisco-style streetcars move visitors on rails past Market Street&#8217;s restaurants and shopping.

South Korean children squeal &#8220;hello!&#8221; at any foreign face as they walk toward the monument-like broad steps of city hall.

The $97 million Gyeonggi English Village feels like a cross between a Hollywood movie set and a theme park. Indeed, film crews and top South Korean actors use it as a convenient location when they need a Western motif.

However, the village&#8217;s mission is to feed the compulsion that many South Korean parents have for teaching their children English.

Many students spend their evenings after school going to English schools, known as &#8220;hakwons.&#8221; They become skilled at grammar and writing, teachers say, but they often lack conversational skills.

It&#8217;s a problem that Gyeonggi English Village tries to counteract by immersing them in a world of English transactions at grocery stores, restaurants, post offices and museums.

Twenty percent of village programs are subsidized for underprivileged youth, Kwon said. They pay 80,000 won, or about $72, for a week of education, with room and board included.

Students can take classes lasting from one day up to four weeks. They learn from 108 foreign teachers and 50 South Korean assistant teachers.

The foreign teachers, like David Lemay of Boston, live in well-appointed apartments inside the village. They teach children ranging from kindergarten to ninth grade. When their day is over, they can grab dinner at places like Genghis Khan&#8217;s barbecue, or head for the English pub, which serves its own microbrew beer.

The park averages about 2,000 visitors a day on weekdays and 8,000 on weekends, Kwon said. Many of the weekday visitors are kindergartners and other young children. Tourists also are welcome, she said.

Gyeonggi English Village is accessible from Seoul by taking Bus 200 from Hapjeong Station, or Bus 900 from Maegum-dong.

The park is next to the Haeri Artists&#8217; Colony, which is also open to the public.