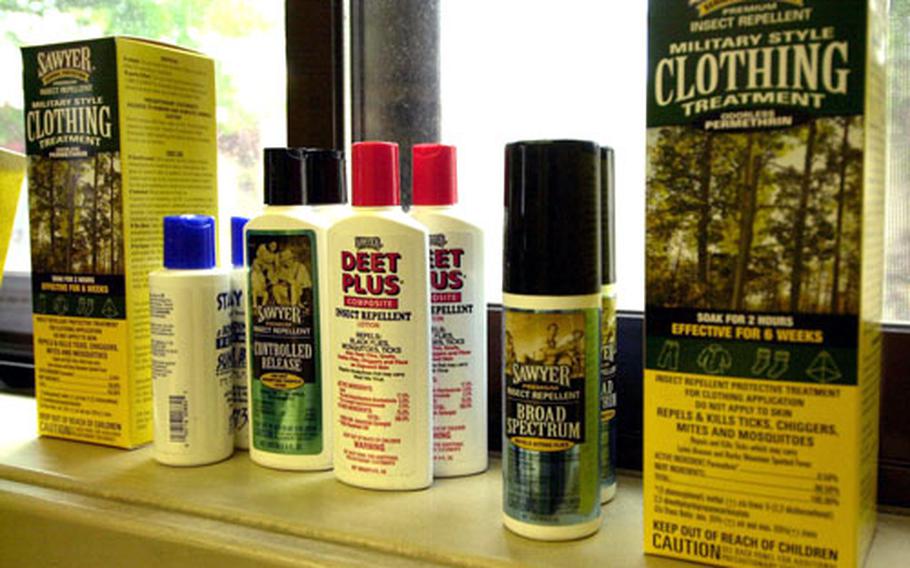 His focus isn&#8217;t on force protection against two-legged attackers. Rather, Klein is worried about keeping the U.S. military in South Korea healthy in the face of disease-carrying mosquitoes, chiggers and ticks.

Mosquitoes can transmit malaria and Japanese encephalitis. Several species carry malaria but the most common in South Korea feeds on cows, according to Klein, Deputy Chief of Staff Force Health Protection with the 18th Medical Command.

The threat of malaria is strongest in rural areas, primarily within 12 to 18 miles of the Demilitarized Zone separating North and South Korea &#8212; home to thousands of 2nd Infantry Division soldiers. However, 18th Medical Command detachments have found malaria-bearing mosquitoes as far south as Gwangju Air Base.

Twenty-three soldiers in South Korea were diagnosed with malaria in 2003; the number dropped to 15 the following year.

Only one type of mosquito in South Korea transmits Japanese encephalitis. It prefers to feed on large water birds, but will also feed on humans and pigs.

While malaria is a threat in the northern part of the country, the greatest risk area for Japanese encephalitis is south of Seoul.

The brown house mosquito is not a vector of disease here, but it is a nuisance, Klein said. The insect breeds in unsanitary pools of water on and off post, and can enter homes and workspaces through tiny cracks and air conditioner gaps.

Chiggers, a type of mite, can spread the potentially fatal scrub typhus. More than 4,000 South Koreans have been treated annually for the disease, Klein said.

Klein said only one soldier has been diagnosed with scrub typhus in the past 10 years. But that statistic might be misleading because, while the disease is difficult to confirm, doctors can presume from symptoms a person might be infected and treat the illness with an antibiotic.

Chiggers and ticks both are found in grassy areas, but ticks also like dead leaves and pine needles and shrubs.

He said protecting yourself from chiggers and ticks means wearing pants tucked in your boots while in grassy or forested areas. Upon return, immediately check for the parasites, he said.

He also stressed to avoid old-school methods of tick removal, like burning the tick or squeezing it to make it release its bite. That will only cause the tick to regurgitate the contents of its stomach into the wound, he said.

If possible, have medical personnel remove the tick. If not, grab the tick as close to the skin as possible with a fine forceps or tweezers and gently pull the tick off. He also recommends to give the tick to preventive medicine staff as quickly as possible so they can test it for diseases.