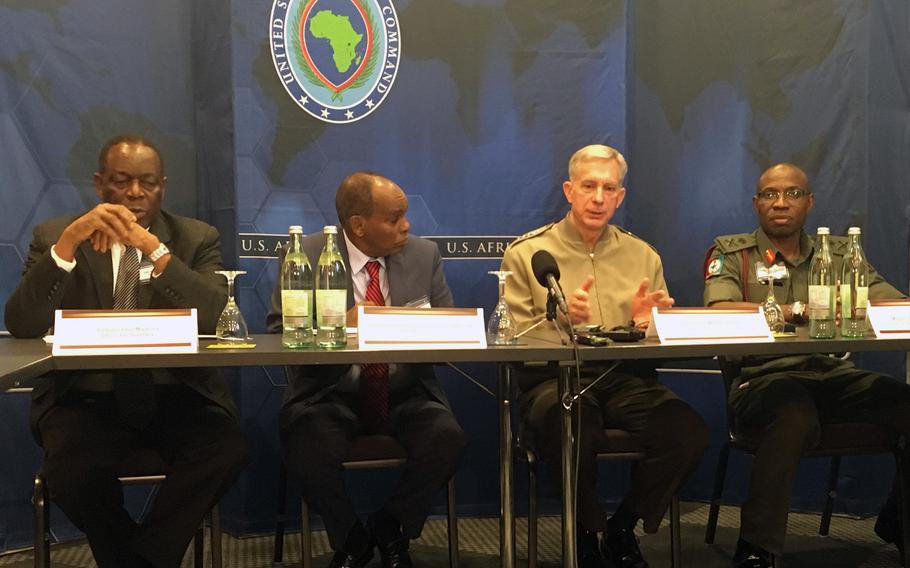 STUTTGART, Germany — Time is running out to prepare Somalia’s fledgling army to lead the fight against the militant group al-Shabab, which could eventually overwhelm local forces if their capabilities aren’t quickly improved, the commander of the African Union’s military mission in Somalia said Thursday.

“I am afraid they (the Somali army) are not ready to take over the security right now,” said Lt. Gen. Osman Nour Soubagleh from Djibouiti, who leads a multinational African force known as AMISOM. “In two years we have to prepare them. The time is very short.”

U.S. Africa Command wrapped up two days of talks in Stuttgart Thursday with about 40 African chiefs of defense, where leaders discussed a range of threats facing the continent. A key focus was Somalia and the looming withdrawal of African Union forces who are set to begin their drawdown in 2018.

The concern: Somalia’s security forces are not competent enough to hold the gains achieved by the African Union force, which has waged a bloody decadelong campaign to push the Islamist militia out of former strongholds. Leading up to its withdrawal, AMISOM said it wants to intensify operations against militants in Somalia, where AFRICOM has recently been granted more command authority by the White House to conduct airstrikes against militants.

During the next two years, the pace of training Somalia’s security forces must quicken, AMISOM officials said.

“We have very little time, so we need to accelerate this,” said Francisco Madeira, the African Union’s special representative on Somalia. “We have to see where we can get resources and training so these people can take over as quickly as possible.”

For more than 10 years, African Union forces have fought the militants, who were on the brink of taking over the entire country. The troops, drawn from the armies of surrounding countries, delivered a series of defeats to al-Shabab, pushing the insurgents out of numerous stronghold and delivering a degree of security to Somali’s capital of Mogadishu.

As a fragile Somali government tries to take root, there is concern that an African Union pullout could lead to an al-Shabab resurgence, reversing gains and strengthening the standing of a terrorist group that has pledged to carry out attacks on the West. More recently, there have been signs that the Islamic State group, under pressure in other areas, also could try to establish a foothold in the country.

The U.S. military has picked up the pace of its operations during the past two years, sending in special operations forces on a training and advisory mission to improve the capabilities of Somalia’s nascent security forces. About 40 logistics troops from the 101st Airborne Division also recently deployed to the country to train government troops on how to better resupply their forces.

AFRICOM has carried out numerous airstrikes in Somali. The U.S. has largely walked away from the country in the years since the notorious 1993 “Black Hawk Down” incident in Mogadishu that left 18 servicemembers dead.

AFRICOM’s Gen. Thomas Waldhauser said his command would continue to strike al-Shabab fighters when targets emerge while moving forward with its training mission. He said he expects the Somali force to be ready when the African Union mission ends.

“What that means for us is we really have to focus on the training and that everything is done as effectively and as efficiently as possible,” Waldhauser said.

Since the early 1990s, Somalia has been in total disarray, with clans, warlords and insurgent groups holding sway in the country. Al-Shabab, in particular, took advantage of the chaos. Despite its setbacks in recent years, it has proved resilient in the face of international efforts to eliminate it.