In S. Korea, flu shots on schedule despite shortage 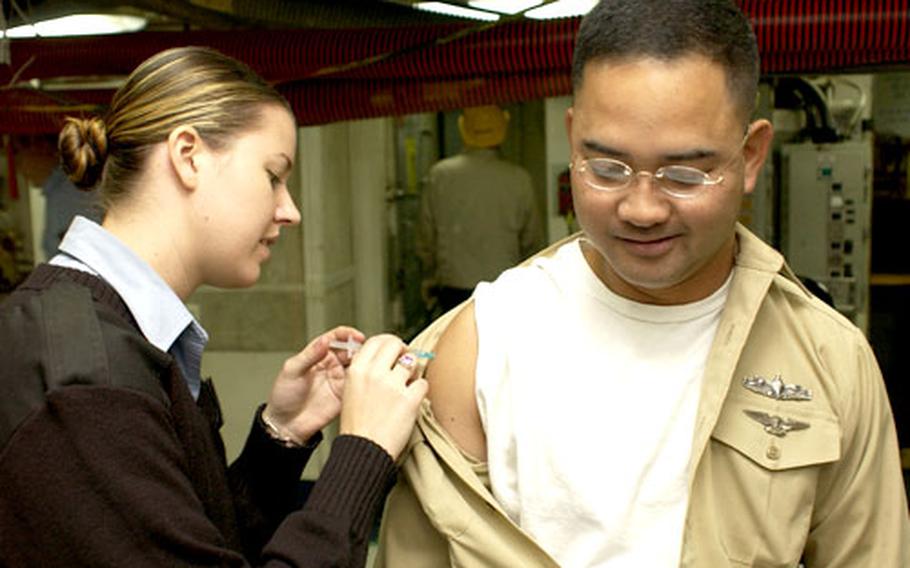 YONGSAN GARRISON, South Korea &#8212; Medical commands in South Korea are dispensing flu vaccines for active-duty servicemembers on schedule, despite a shortage of the shots in the States.

Since the inoculation program began earlier this month, about 500 soldiers reporting to Area II have received the shot, according to William Nieding, the officer in charge of the medical readiness team for the 18th Medical Command.

The 8th Army uses vaccine from Aventis Pasteur, not the British-based Chiron Corp., which shut down its flu-shot supply a few weeks ago due to safety concerns. That move left American supplies short by about 46 million shots, according to the U.S. Department of Health and Human Services.

Children 6 to 23 months old, adults older than 65 and other people considered at high risk for infection also qualify for the vaccine.

Soldiers arriving in South Korea get flu shots as part of a series against infections and diseases. The inprocessing office at Yongsan Garrison also gives inoculations for smallpox, hepatitis A and B, typhoid and tetanus, Nieding said.

The servicemembers began receiving smallpox inoculations in September, and more than 800 shots have been administered, Nieding said. He said he&#8217;s heard no reports of any adverse side effects because of the inoculation.

Sgt. 1st Class William Surgeon, with the 6th Cavalry, got his smallpox inoculation on Friday.

Unlike many other inoculations, the smallpox vaccine contains a live virus, according to the Centers for Disease Control and Prevention. To give the vaccine, the needle must be dipped into the live virus then pricked repeatedly into a person&#8217;s skin. If the vaccine is successful, a pus-filled blister develops, then scabs over before forming a scar.

Some soldiers are exempt from the smallpox inoculation because of cardiac problems, pregnancy or skin problems with the soldier or any family member, Nieding said.

Earlier this week, medical commands in South Korea suspended anthrax inoculations after a federal judge in Washington ruled the Food and Drug Administration failed to properly approve the experimental vaccine for general use.

The judge&#8217;s ruling, which prompted an order halting the vaccines from the Pentagon, came after the FDA failed to allow for a public comment period before approving the vaccine. The decision marked the second time in less than 12 months the Pentagon was ordered to stop its anthrax program.

Nieding said soldiers who already began the six-shot regimen will not have to repeat any steps, no matter how long the suspension lasts.