Allison Hill, 6, takes a stab at a songpyeon (stuffed rice cake) Thusday during a potluck Chuseok meal in Rosalind Rutledge&#39;s first grade class at Seoul American Elementary School. Millions of families in Korea, like Allison&#39;s, will celebrate Chuseok this weekend by traveling to their hometowns and remembering their ancestors. (Teri Weaver / S&S)

Allison Hill, 6, takes a stab at a songpyeon (stuffed rice cake) Thusday during a potluck Chuseok meal in Rosalind Rutledge&#39;s first grade class at Seoul American Elementary School. Millions of families in Korea, like Allison&#39;s, will celebrate Chuseok this weekend by traveling to their hometowns and remembering their ancestors. (Teri Weaver / S&S) 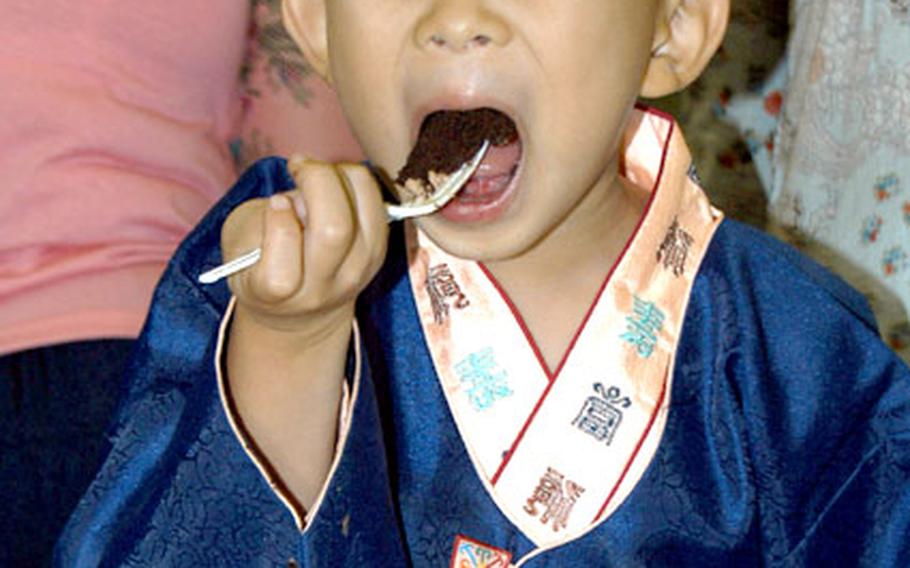 Sookk-young Rinke, middle, straigtens the bow on the hanbok of her younger daughter, Sara, while her older daughter, Rebecca, watches. Rinke was one of many parents who helped Thursday during a Chuseok potluck lunch at Seoul American Elementary School. (Teri Weaver / S&S)

YONGSAN GARRISON, South Korea &#8212; Sookk-young Rinke considers herself lucky. She&#8217;ll enjoy the Chuseok holiday with her family in South Korea this year but won&#8217;t have to cook much.

Rinke, who grew up in South Korea, now lives in Seoul with her husband, Maj. Matthew C. Rinke, and their daughters, Rebecca, 5, and Sara, 4. They&#8217;ll travel to Ulsan on Sunday &#8212; where, as custom dictates, it will be her sister-in-law preparing the holiday dishes.

Daughters-in-law have the responsibility of making the beef and chicken dishes, rice cakes, fruits and other traditional dishes to honor the family&#8217;s ancestors during the three-day harvest holiday that begins Saturday.

But on Thursday, Rinke was among the many parents in Rosalind Rutledge&#8217;s first-grade classroom at Seoul American Elementary School who cooked traditional Chuseok dishes for a potluck lunch with their children.

Maj. Newton Hill, who works in the Legal Office at Yongsan, came to eat lunch with his daughter, Allison. His family will travel to Allison&#8217;s grandmother&#8217;s home on Sunday, the day of Chuseok, when each family honors its ancestors.

Hill said the trip normally takes about an hour but because millions of Koreans will be traveling on Sunday, he expects a much longer journey.

The South Korean government estimates families will make more than 64 million trips around the country this weekend, including round-trips and visits to more than one branch of their families.

Many people will begin traveling on Friday and return home Monday or Tuesday, according to Gil Yong-beum of the Ministry of Construction and Transportation&#8217;s general traffic planning department.

Because of the crowded roads, a trip from Seoul to Busan &#8212; 275 miles &#8212; will take about nine hours, he said, adding that bus and subway service also will be extended until 2 a.m. on Monday.