In rural areas, soldiers wait for insurgents in their 'sanctuary' 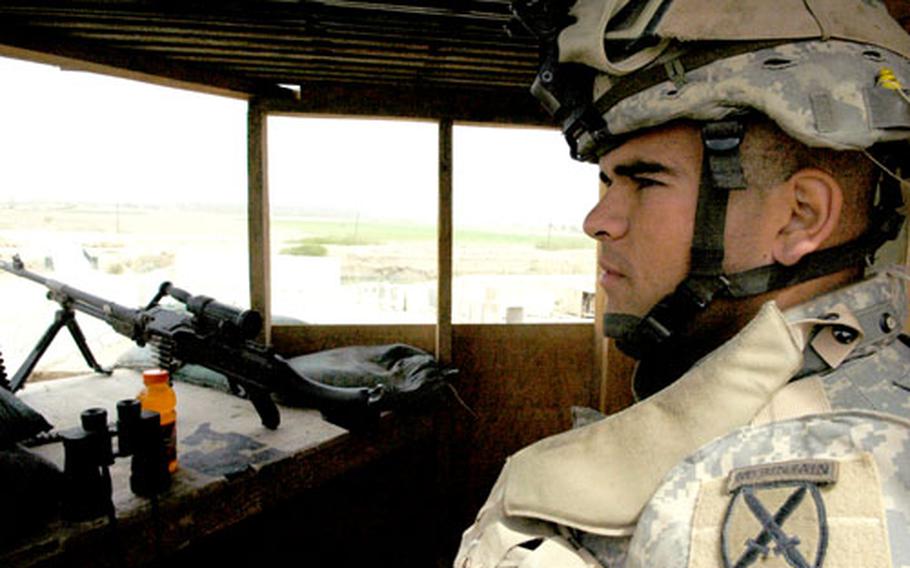 PATROL BASE COURAGE, Iraq &#8212; In recent weeks, thousands of soldiers in the Baghdad area have changed their daily mission, moving to new sectors, working to secure key mosques or public buildings and adjusting to a new spike in sectarian violence.

But here in the outlying farmlands, life has changed little for soldiers who patrol the rural roads, keeping watch for roadside bombs and searching for insurgents, presumably Sunni, trying to stage attacks in the city center.

&#8220;It&#8217;s been a pretty steady state of operations; we haven&#8217;t seen a significant change&#8221; in recent weeks, said 1st Sgt. Joseph Stamford, describing his mission as similar to many during the past year. &#8220;We&#8217;re trying to disrupt their sanctuary. This is a transitional area: They come in here and get supplies before they move in toward Baghdad.&#8221;

The area here, about 15 miles north of Baghdad, remains within range for insurgents to launch rockets and mortars on the U.S. troop base at Baghdad International Airport and Camps Victory and Liberty.

Controlled by a company with the 10th Mountain Division, the patch of land abuts Anbar province. It has virtually no Iraqi army soldiers, few civil affairs projects and no sign of sectarian violence. It is a part of central Iraq that remains a comparatively uncomplicated fight: U.S. troops versus insurgents.

The traditional-style fight is markedly different from the increasingly complex mission for troops closer to the city center, where U.S. soldiers have a constantly evolving relationship with their Iraqi army counterparts and focus on a mission that aims to quell sectarian tensions and prevent large-scale civil unrest.

Roadside bombs remain the defining aspect of life as soldiers roam a network of roads named after U.S. professional hockey teams and keep watch for wires, potholes and potential triggermen in the nearby palm groves.

The 27-year-old squad leader from the 2nd Battalion, 22nd Infantry Regiment was on a rural road on March 11 when his a four-truck patrol was hit by an roadside bomb.

The bomb shattered the Humvee&#8217;s front windshield and bent the grill and front bumper, but no one was injured.

The instant the bomb blew, two cars across the field began to flee. A gunner sprayed rounds from an M-240 machine gun at the cars, but the men got away. An inspection of the bomb crater revealed copper wires running from the bomb to the area where the men were parked.

It was one of about 20 roadside bombs soldiers from Company A have hit since moving here in December.

One soldier&#8217;s legs were severely wounded by a roadside bomb, while other soldiers have sustained concussions and damaged ear drums. The battalion&#8217;s only fatality happened when a soldier was shot in the neck during a patrol in early March.

As the Iraqi army takes over day-to-day operations in nearby areas, U.S. commanders are building up the troop presence at Patrol Base Courage, from just a few dozen soldiers in December to more than a hundred now, and plan for further expansion.

The soldiers have found five large weapons caches, each with hundreds of rounds hidden under piles of thatch or buried under a thin covering of sand. Yet the attacks on U.S. troops here remain steady.