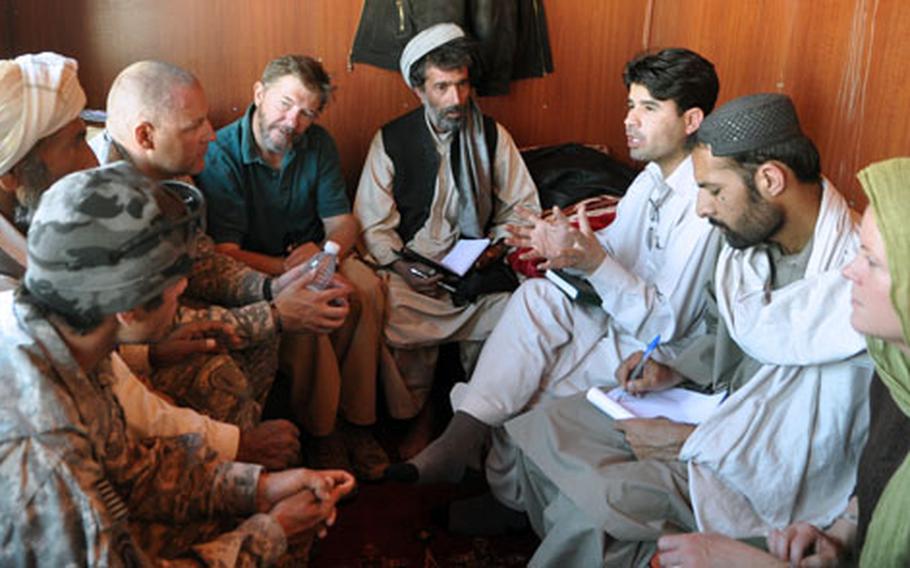 Ghulam Faruq Hamayoon, sub-governor of Logar province’s Kharwar district (sitting under the jacket), meets with soldiers and reconstruction officials in the cramped trailer that serves as his headquarters. Hamayoon, who was hired after the last sub-governor simply left and never returned, has no staff and says he feels abandoned by his government. (Heath Druzin / S&S)

Ghulam Faruq Hamayoon, sub-governor of Logar province’s Kharwar district (sitting under the jacket), meets with soldiers and reconstruction officials in the cramped trailer that serves as his headquarters. Hamayoon, who was hired after the last sub-governor simply left and never returned, has no staff and says he feels abandoned by his government. (Heath Druzin / S&S) 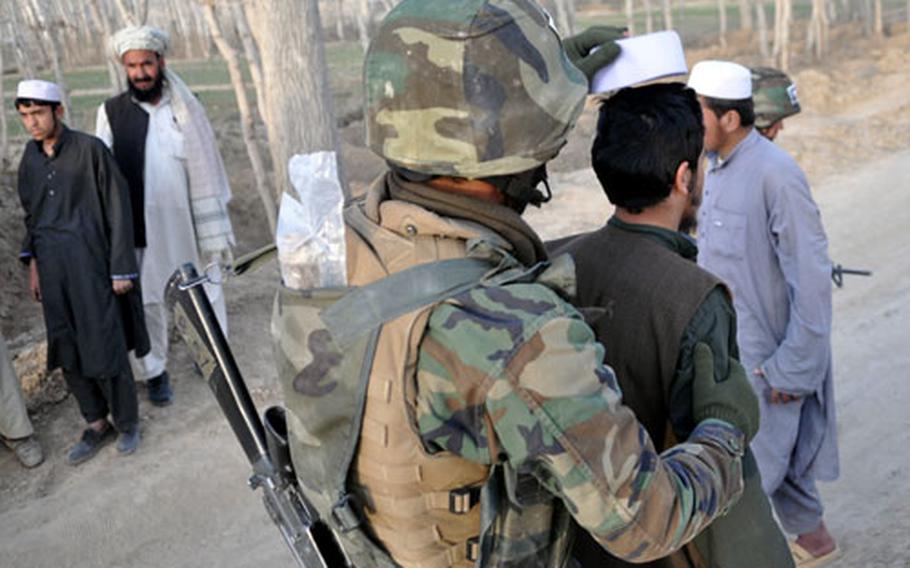 An Afghan soldier searches a man after stopping a crowded mini-bus in rural Logar province. Support for the Afghan government is low in far-flung regions of Afghanistan, where villagers complain they have been forgotten by corrupt, ineffective officials. (Heath Druzin / S&S) 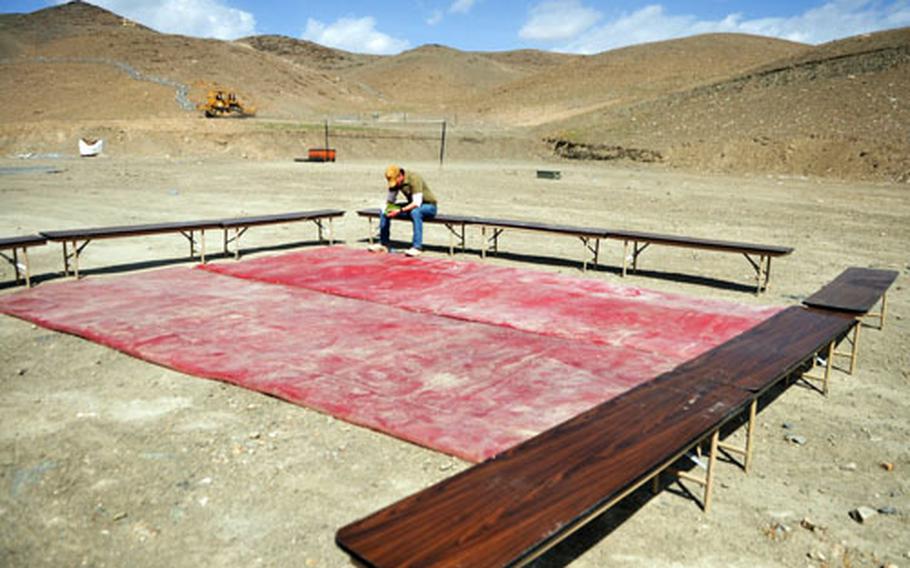 Gary Soiseth, a U.S. Department of Agriculture adviser working in Afghanistan, sits alone at what was to be a shura for farmers in Wardak province. Afghan Ministry of Agriculture employees scheduled to attend canceled at the last minute and no local villagers showed up. (Heath Druzin / S&S)

KHARWAR DISTRICT, Afghanistan &#8212; While many government jobs in Afghanistan are handed out as prizes, no one is fighting over the post of Kharwar district sub-governor.

Given the dingy shipping container that serves as both the sub-governor&#8217;s home and the district center for this rugged, volatile area high in the Hindu Kush mountains in eastern Afghanistan&#8217;s Logar province, it&#8217;s no surprise that the last appointee fled his job.

He&#8217;d been tricked into taking the post, and lasted just six weeks before he slipped out of a meeting of elders, never to return to the job, said U.S. Army Capt. John Williams, the commander of a small base in the district

For weeks, Kharwar had no district sub-governor. Now, they have a reluctant one, in Ghulam Faruq Hamayoon, who is afraid to travel into much of his district and says he has no support from Kabul.

Across the country, Afghans&#8217; most persistent complaints are about government corruption and ineffectiveness. In many of the agrarian nation&#8217;s more far-flung places &#8212; like Kharwar, a series of rough-hewn villages 8,000 feet up in the mountains &#8212; villagers often go months without seeing a government official.

The mountainous provinces of eastern Afghanistan have long simmered with insurgent activity. Fighters pour across the Pakistan border each spring and the Afghan government struggles to exert authority.

Hamayoon looks perpetually weary and overwhelmed by his task. He is supposed to have a staff of eight, but so far he works alone.

When he swooped in via Black Hawk helicopter, flanked by U.S. soldiers, for a hasty visit to the village of Bazi Khel in late April, it was the first time a government official had visited the dusty farming community in more than seven months.

There are no schools in the area, and villagers say they can&#8217;t remember the last time Afghan government officials visited without a contingent of U.S. troops for security. Hamayoon was bombarded with complaints during his short tour.

In a village down a dirt path from Bazi Khel, the town&#8217;s elder said his people barely get enough to eat and have received no projects from the Afghan government or the U.S. The elder recently received paperwork to apply for projects but had to send it to an acquaintance in another town because no one in his village can read.

He said young people in the area are susceptible to Taliban influence.

The only recent interaction with a government official was a man hired to issue identification cards &#8212; villagers say he charged 10 times what he was supposed to and pocketed the difference, an accusation confirmed by the district governor.

Williams, 39, who spends most days painstakingly trying to build trust between villagers and the government, said corrupt officials are undermining their efforts.

The saga of Kharwar&#8217;s last district sub-governor, who lasted only six weeks, is indicative of the problems the central government has in exerting control over remote areas. That man did not want the post but was tricked into coming to Kharwar for a shura, or meeting of elders, by Logar&#8217;s provincial governor, Williams said. Once the would-be sub-governor &#8212; who was from a different part of Logar province &#8212; got off the U.S. military helicopter taking him to the shura, he was informed of his new job and told he couldn&#8217;t get back on the chopper to go home.

Six weeks later he returned the favor, flying to a nearby U.S. base for another shura, then slipping out the gate never to return to the job.

In neighboring Wardak province, local government is equally invisible. Most government officials are frightened to travel far from the provincial capital of Maidan Sharh without military protection and loathe to travel too much with the military out of fear it will make them look dependent on the U.S.

At a recent farmer&#8217;s shura in Wardak province&#8217;s insurgent-rich Tangi Valley, U.S. Department of Agriculture adviser Gary Soiseth sat alone on benches set up for villagers, head downcast. The shura had ended disastrously before it began.

First, the Afghans who staff the provincial branch of the Ministry of Agriculture canceled at the last minute. Then, none of the local villagers showed up.

Soiseth, a 25-year-old Californian whose family runs an almond ranch, works with the province&#8217;s agricultural officials in Maidan Shar. He said they mean well but rarely meet with any farmers outside of their office because they are too frightened to travel. The only government official most Afghan farmers see is Soiseth, fueling the notion that the Afghan government is inept and the American government is the only one that can provide goods and services.