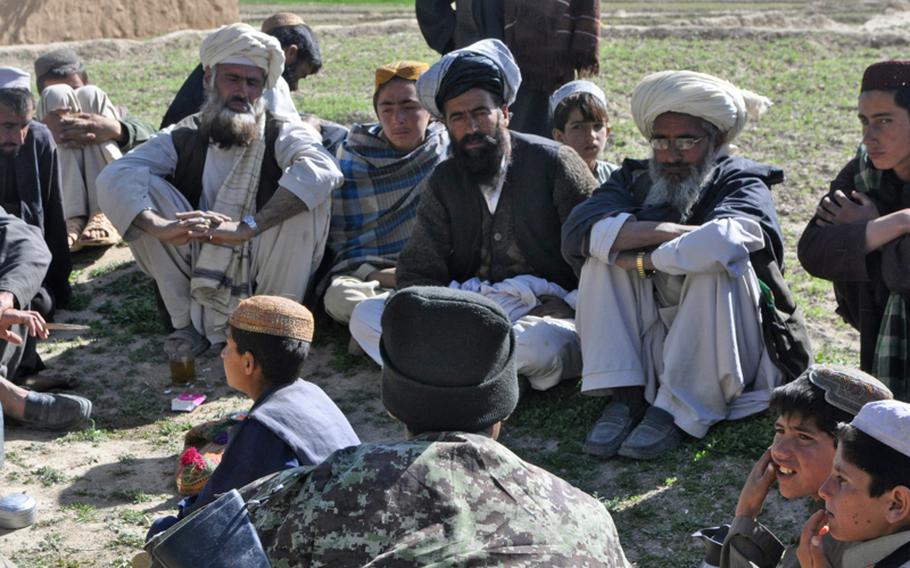 Buy Photo
Elders in the village of Kor Jalal, located in southern Logar province, listen to Bazudin Mohmand (in dark cap at bottom), commander of an Afghanistan National Army unit on joint patrol with a U.S. Army platoon, during an informal shura last week. (Martin Kuz/Stars and Stripes) 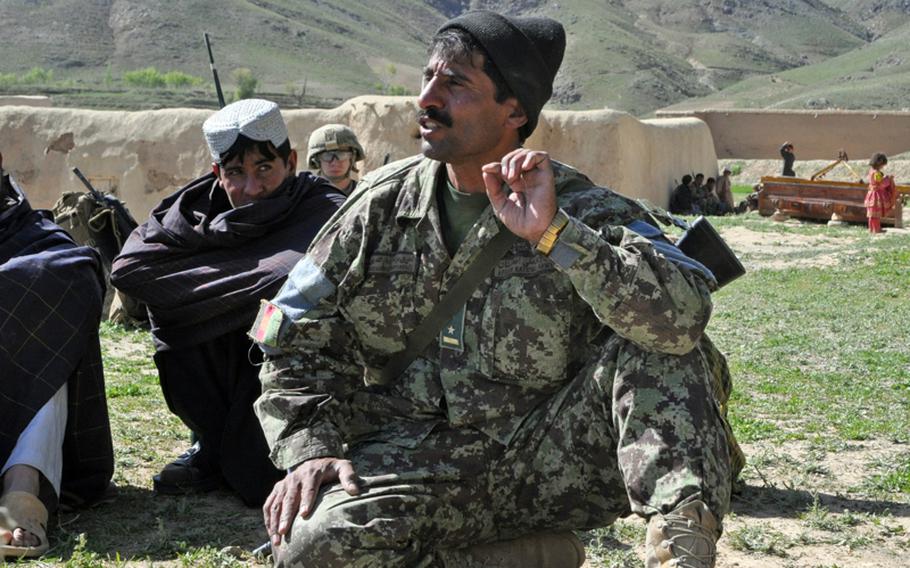 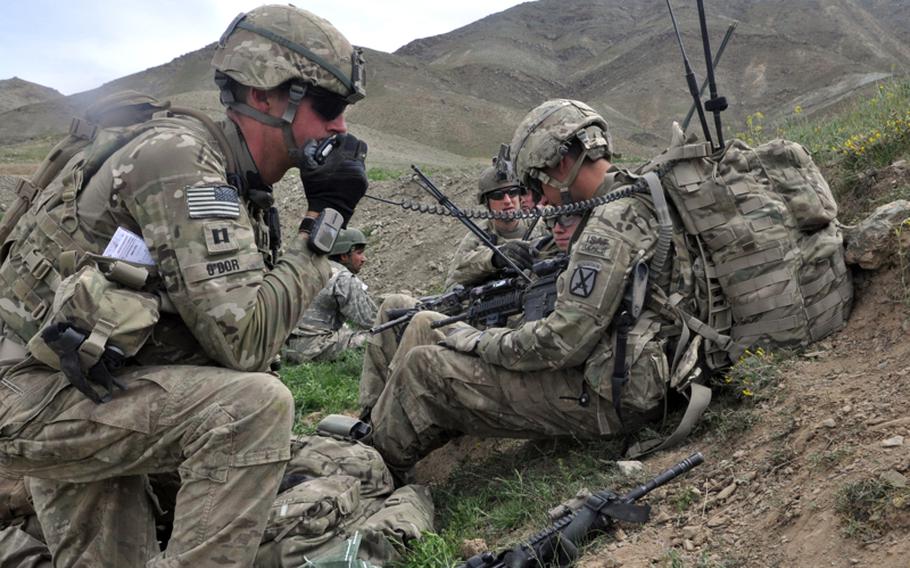 Buy Photo
Capt. Josh O&#39;Dor, left, of the 2nd Battalion, 30th Infantry Regiment of the 10th Mountain Division, radios information to base commanders after his platoon took fire from insurgents during a patrol operation in southern Logar province last week. Two U.S. soldiers were wounded in the skirmish. (Martin Kuz/Stars and Stripes) 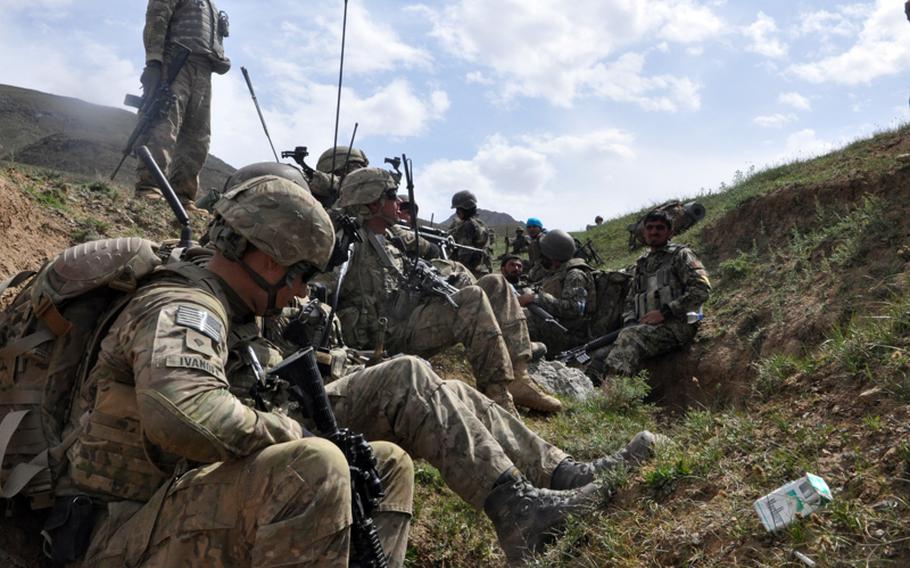 Buy Photo
U.S. and Afghan soldiers seek cover in a ditch after coming under fire from insurgents last week while on patrol in southern Logar province. Two U.S. soldiers were wounded in the skirmish. (Martin Kuz/Stars and Stripes) KOR JALAL, Afghanistan &mdash; The day&rsquo;s work began near dawn for the 75 U.S. and Afghan soldiers conducting a patrol in this mountain village about 70 miles south of Kabul. Plumes of dust rose from the ground as they trudged through terraced fields of wheat and corn toward a cluster of mud-walled dwellings. Residents stepped from their homes to watch.

The soldiers moved door to door to search for weapons and equipment that might reveal insurgent activity, displaying a willful calm intended to allay the anxiety of residents. The sweep uncovered little incriminating evidence, and as the sun climbed in a cloudless sky, a dozen elders sat down on a patch of grass to hold an impromptu shura.

They were joined by Capt. Josh O&rsquo;Dor of the 2nd Battalion, 30th Infantry Regiment of the 10th Mountain Division, and Bazudin Mohmand, commander of the Afghanistan National Army unit working with O&rsquo;Dor&rsquo;s Company D platoon. The elders served green tea from stainless steel carafes, and after an initial reticence, they divulged that they remain under threat from the Taliban.

&ldquo;We tell them not to come here,&rdquo; said 65-year-old Mohammed Salim, a lifelong resident of Kor Jalal, who wore wire-rimmed glasses and spoke in a high, thin voice. &ldquo;But we need you to tell them.&rdquo;

Mohmand, a short man with a thick black mustache and shining brown eyes, responded that Afghans &mdash; soldiers and civilians alike &mdash; must share the burden of defeating the insurgency. &ldquo;This is our responsibility to America &mdash; to save our country by ourselves,&rdquo; he said.

For now, the obligation to safeguard the remote southern reaches of Logar province &mdash; an area of eastern Afghanistan that troops dub &ldquo;the frontier&rdquo; for its sand-swept landscape and sparse population &mdash; falls mostly to the Company D platoon, deployed here since October. They have taken fire on at least 60 occasions from insurgents who typically strike from no closer than a half-mile away, hiding amid the clefts and caves of the surrounding mountains.

Two attacks within hours of last week&rsquo;s shura offered an emphatic reminder that the Taliban, with its spring offensive well under way, refuses to cede ground, even in Afghanistan&rsquo;s outland.

The first attack came as the soldiers rested in a grove outside Kor Jalal in the shadow of Awdaki Mountain. As gunfire rained down from somewhere high in the saw-toothed ridgeline, they flung aside MREs and bottled water to respond with a fusillade of their own.

They escaped injury during the brief firefight, but an hour later bullets again showered them as they walked across a farm field toward another village. Two U.S. soldiers were hit &mdash; one in the lower back, the other through the shoulder &mdash; and evacuated by helicopter. Both survived.

Members of the platoon expect the violence to intensify this summer. Kor Jalal and its neighboring villages lie near a suspected weapons trafficking corridor linking Kabul and Kandahar. NATO and Afghan forces want to disrupt the movement of insurgents and materiel in coming months by expanding the so-called security bubble around each city into outlying areas.

A crucial aspect of the security zone campaign involves persuading villagers to embrace the concept of formal governance &mdash; a daunting prospect in impoverished agrarian districts, where farming provides the lone reliable source of income, tribal elders retain carte blanche and the Taliban exerts influence through bribes and intimidation.

&ldquo;It&rsquo;s like back in the 1800s in the U.S.: Whoever had the money, had control,&rdquo; said Sgt. John Beck, a platoon squad leader with Company D. &ldquo;These people don&rsquo;t have money or jobs. When the Taliban says they&rsquo;ll pay them, especially the younger guys, to be spotters or informants, they take it.&rdquo;

As they fill the dual role of fighter and ambassador in this region, the platoon&rsquo;s soldiers, like their fellow troops across Afghanistan, find themselves trying to repel the enemy while teaching a largely isolated, uneducated populace. Even nine years into this conflict, Beck recalls that early in the deployment some villagers saw U.S. troops and thought the Russian army had returned.

&ldquo;Closer to Kabul, people have more of an understanding of the world,&rdquo; Beck said. &ldquo;Out here, they just want to be left alone. But the Taliban isn&rsquo;t going to leave them alone.&rdquo;

&ldquo;In the end, it&rsquo;s up to them,&rdquo; O&rsquo;Dor said. &ldquo;What do they want? They have to make those decisions.&rdquo;

Village elders in Kor Jalal listed a series of projects &mdash; a school, a medical clinic, a paved road &mdash; that they said would bring stability to the area.

&ldquo;We are very poor people,&rdquo; said Mohammad Khan, 55, a farmer and the father of six. &ldquo;We need these things so that our children can have a future and we can go forward.&rdquo;

O&rsquo;Dor, who attributes the plight of rural Afghans in part to &ldquo;learned helplessness&rdquo; wrought by decades of war, left most of the talking to Mohmand, the ANA commander. Rather than dwell on the wish list of projects, or the mixed results yielded by similar building efforts elsewhere, the commander repeatedly asked his audience to resist the Taliban and support the Afghan army and police.

As the discussion wound down, O&rsquo;Dor said, &ldquo;We certainly don&rsquo;t want to disturb your village. Please let us know if we are making you unsafe.&rdquo;

Yet, the insurgent attacks following the shura suggest that, at least in the near future, those risking the greatest harm might be the soldiers. After eight months in Afghanistan, the peril has become as familiar to them as the thin air they endure while moving on foot through an area more than 8,000 feet above sea level.

And so, a day after the platoon suffered the first casualties of its deployment, the soldiers continued with their searches and three-cups-of-tea diplomacy in the region&rsquo;s villages, resuming the fight over what 1st Lt. Theo Kleinsorge called the country&rsquo;s &ldquo;human terrain.&rdquo;

&ldquo;Just because there are three bad dudes in the village, I&rsquo;m not going to label it a bad village,&rdquo; he said. &ldquo;The vast majority of people in this country &mdash; there&rsquo;s nothing wrong with them. You have to keep trying to talk to them.

&ldquo;We&rsquo;re fighting two battles,&rdquo; Kleinsorge said. &ldquo;There&rsquo;s the one against the Taliban, and the one to convince people they have a choice.&rdquo;