In quest for battlefield network gear, Army fighting to keep up with technology 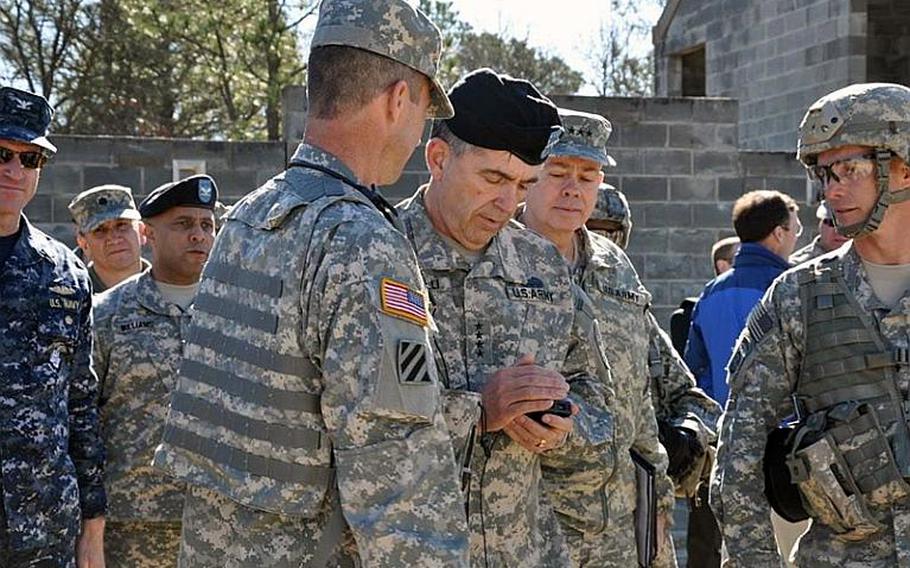 Gen. Peter Chiarelli, the Army&#39;s vice chief of staff, views a photo downloaded on a prototype JBC-P handheld smartphone. The Army is considering several options, including smartphones, for its battlefield networking system. (Ashley Blumenfeld/Courtesy of th)

Gen. Peter Chiarelli, the Army&#39;s vice chief of staff, views a photo downloaded on a prototype JBC-P handheld smartphone. The Army is considering several options, including smartphones, for its battlefield networking system. (Ashley Blumenfeld/Courtesy of th) 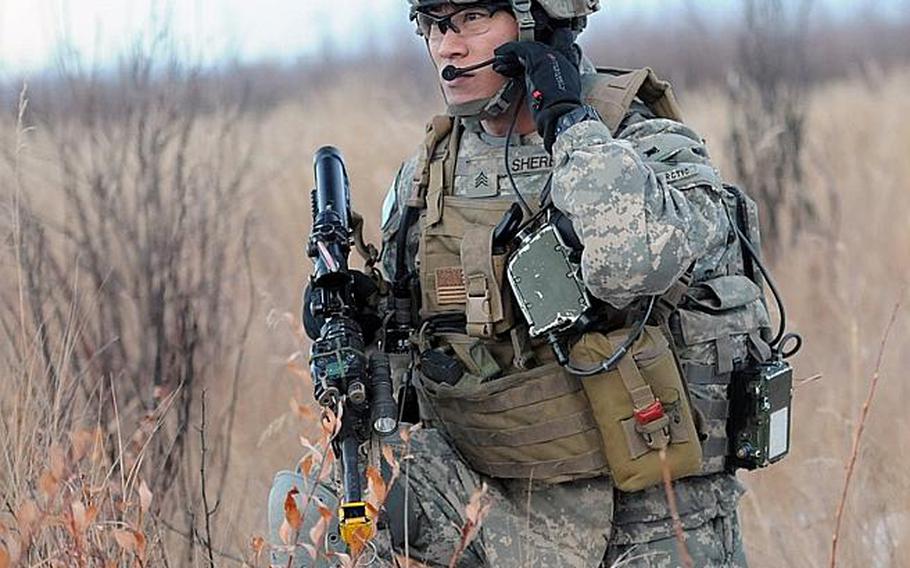 Sgt. Jeff Sherer communicates using the headset portion of the Land Warrior system during training in November at Fort Wainwright, Alaska. Canceled in 2007, leftover Land Warrior equipment is still in use as the Army searches for a battlefield networking solution. (Thomas Duval/Courtesy of the U.S) 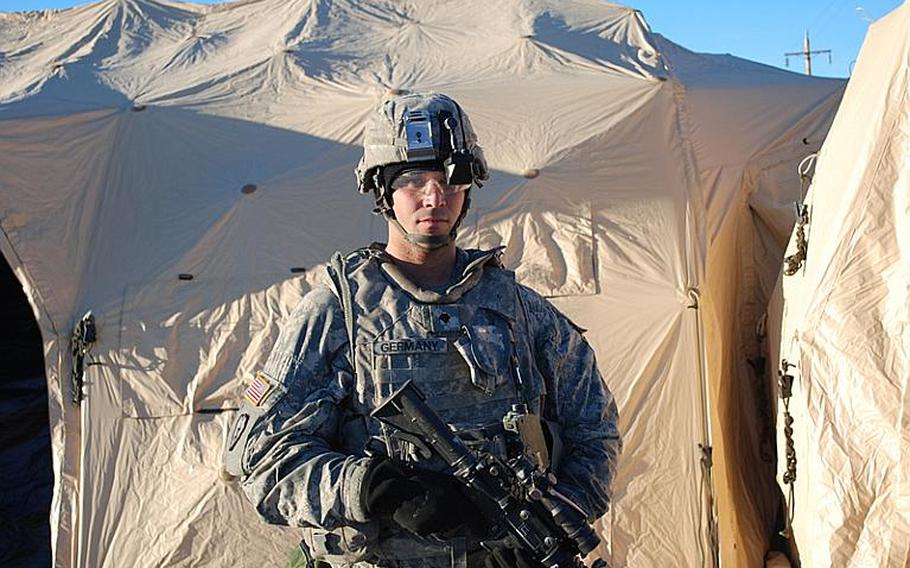 Soldiers from 1st Battalion, 24th Infantry Regiment, used Land Warrior system during squad live-fire training in November at Fort Wainwright, Alaska. Canceled in 2007, leftover Land Warrior equipment is still in use as the Army searches for a battlefield networking solution. (Courtesy of the U.S. Army)

WASHINGTON &mdash; The helicopters swerved, entering the landing zone from an unexpected angle to avoid a row of power lines that appeared out of the Iraqi night.

A small squad led by Staff Sgt. Sam Lee scrambled out in pursuit of a high-value target in a nearby building. But the last-minute change meant the house didn&rsquo;t sit in the direction they expected.

&ldquo;At that point,&rdquo; Lee said, &ldquo;I&rsquo;d normally have to stop, literally take out a compass, and orient myself,&rdquo; perhaps giving the target precious seconds to escape, or worse, giving enemy crosshairs time to settle on his troops.

Instead, without stopping, he flipped down an eyepiece and viewed a computer screen with an overhead GPS image of the area. With the target location plotted in advance, the team moved rapidly through the darkness.

&ldquo;We moved in and took the building with no delay at all,&rdquo; Lee said.

They were guided by technology called the Land Warrior strike system, a long-planned program that connects soldiers to an electronic battlefield command network. It provides communications between commanders and troops along with a constantly updated visual representation of the battlefield &mdash; streets, buildings, friends and foes.

Ironically, the system had already been canceled by the time of the successful raid by Lee&rsquo;s team (though his Stryker brigade kept using the test devices they&rsquo;d been given before deployment.) The Army pulled the plug in 2007 after more than 10 years of development and some $500 million in expenditures.

Today the Army is still searching for the elusive set of hardware and software to build a military network linking up every level of command. Such a system would &ldquo;make our various formations more lethal, faster, and more survivable on today&rsquo;s battlefield,&rdquo; Gen. Peter Chiarelli, Army vice chief of staff, said this week. &ldquo;The network will literally redefine how we fight in the same way that social media has changed the way we interact and communicate in our personal lives.&rdquo;

But as in the realm of social media, where dominant platforms like Twitter arise from seemingly out of nowhere, predicting the future shape of battlefield information technology isn&rsquo;t easy. Weight turned out to be the primary problem for Land Warrior. At 17 pounds, with battery-sucking components and cables snaking around the soldier&rsquo;s torso, its capabilities didn&rsquo;t justify the added burden for soldiers already loaded with weapons, armor and supplies.

Land Warrior technology is now being salvaged by a successor program &mdash; Nett Warrior &mdash; a functionally identical system that program managers have cut to just more than 12 pounds as it nears limited production for field testing this summer.

But even the more refined Nett Warrior system may already be obsolete as the Army simultaneously eyes an exploding selection of tiny, increasingly powerful smartphones and the multitude of apps that run on them.

Because the market is far more agile than military planners are at staying abreast of technology, commercial technology could start displacing expensive military systems planned years in advance, Chiarelli said.

Both Nett Warrior and smartphones &mdash; including a new Army-developed prototype that runs the Android operating system &mdash; will be put through their paces in the Army&rsquo;s first Network Evaluation Integration test next month at Fort Bliss, Texas and the adjacent White Sands Missile Range, N.M. In the tests, which the Army says will be run twice each year, soldiers will test a range of network devices for compatibility before sending them downrange.

&ldquo;They had the ability to pull down full-motion video, they had the opportunity to send pictures of wounded soldiers to a doctors on the other end who could tell a medic what initial battlefield treatment he should give to this soldier before he could be evacuated,&rdquo; he said. &ldquo;I think there&rsquo;s all kinds of possibilities for us using those kinds of COTS [commercial off-the-shelf] solutions.&rdquo;

Smartphones may not be optimal devices when bullets are flying, however. Soldiers don&rsquo;t generally keep an eye on their iPhones as they charge into battle, said Gen. Keith Walker, head of Brigade Modernization Command.

Walker related the words of one soldier who told him: &ldquo;When I was doing a raid, I didn&rsquo;t use my cellphone, because to do that would be a distractor. I was looking at where was the enemy. I was worried about shooting the enemy and not getting shot at.&rdquo;

Unlike a cellphone originally designed for use in peaceful surroundings, the Land Warrior/Nett Warrior concept was put together for use under fire. Instead of a small touchscreen, computer input is through a chunky handheld controller designed to be easy to use when adrenaline is pumping.

Another problem: How would the Army manage secure communications with an iPhone or an Android phone? Nett Warrior&rsquo;s project requirements mandate such secrecy because many military operations do too. &ldquo;We don&rsquo;t fight in an unclassified mode,&rdquo; Gaddy said. &ldquo;We fight in secret.&rdquo;

Though it is improving, Gaddy said, Nett Warrior is far from perfect. Batteries and government-supplied secure communications equipment that are a required part of Nett Warrior currently limit how much weight-shaving can be done. Realistically, the system needs to be no heavier than about five pounds before the Army will think about distributing it to all fighting units, he said.

That means getting it down close to a smartphone in size and flexibility, but finding innovative solutions to maintain fightability and security.

&ldquo;The technology is there, and we can do it and deliver in smaller forms,&rdquo; Gaddy said. &ldquo;The challenge is how do you meet the mission essential capabilities within the constraints of security?&rdquo;