In postwar environment, US and European troops work to prove relevance 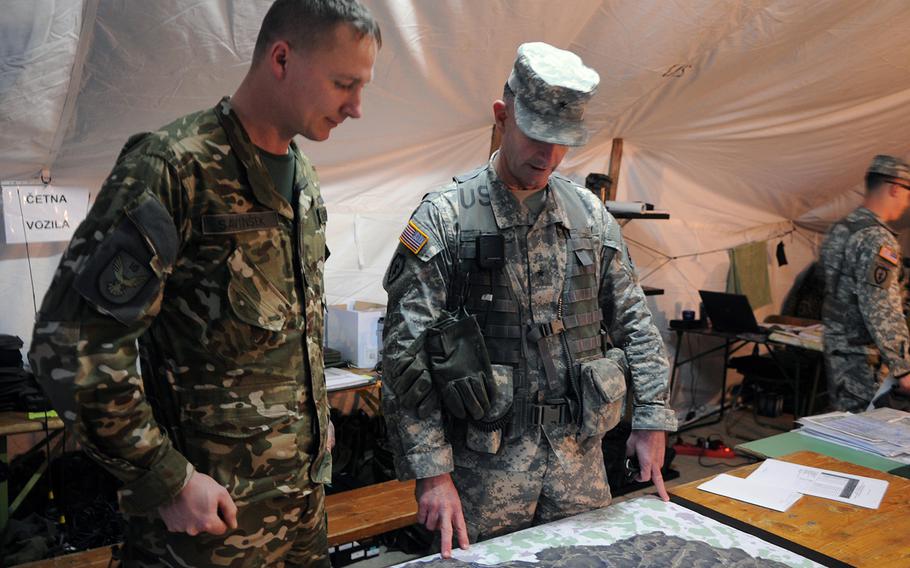 Buy Photo
Brig. Gen. Walter Piatt, head of the Joint Multinational Training Command, talks with Slovenian 1st Lt. Savinsek Primoz about tactics on Nov. 13, 2013, during war games at the Army's training center in Hohenfels, Germany. U.S. and European militaries are working together as a multinational combat brigade. The exercise is intended to boost the combat effectiveness of a joint combat unit. (John Vandiver/Stars and Stripes)

Buy Photo
Brig. Gen. Walter Piatt, head of the Joint Multinational Training Command, talks with Slovenian 1st Lt. Savinsek Primoz about tactics on Nov. 13, 2013, during war games at the Army's training center in Hohenfels, Germany. U.S. and European militaries are working together as a multinational combat brigade. The exercise is intended to boost the combat effectiveness of a joint combat unit. (John Vandiver/Stars and Stripes) 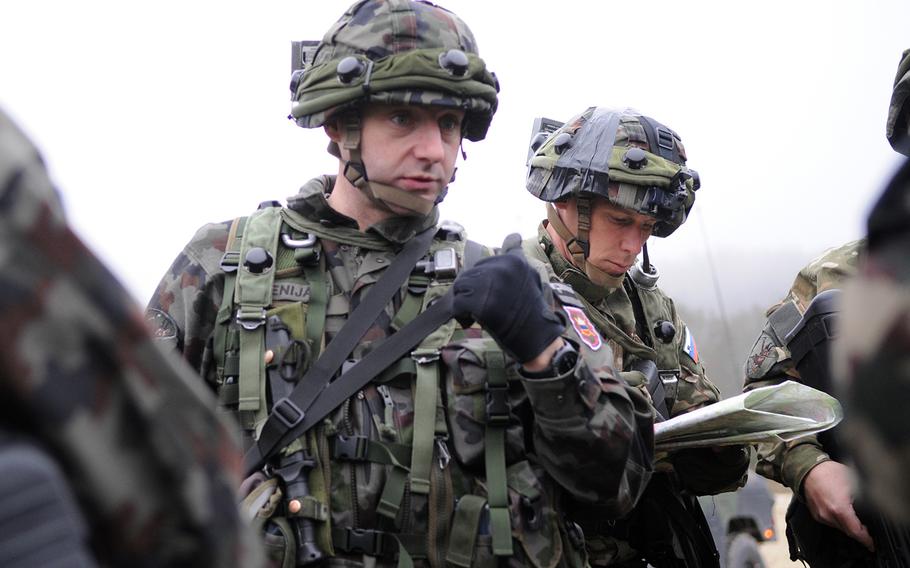 Buy Photo
Lt. Col. Anze Rode, commander of the Slovenian regiment training in Hohenfels, Germany, gives instructions to his troops during maneuvers against the enemy force in Combined Endeavor, a multinational exercise focused on strengthening the combat capabilities of U.S. and European militaries. Troops from the U.S. and several European nations are taking part during the exercise, set to conclude Nov. 24, 2013. (John Vandiver/Stars and Stripes) 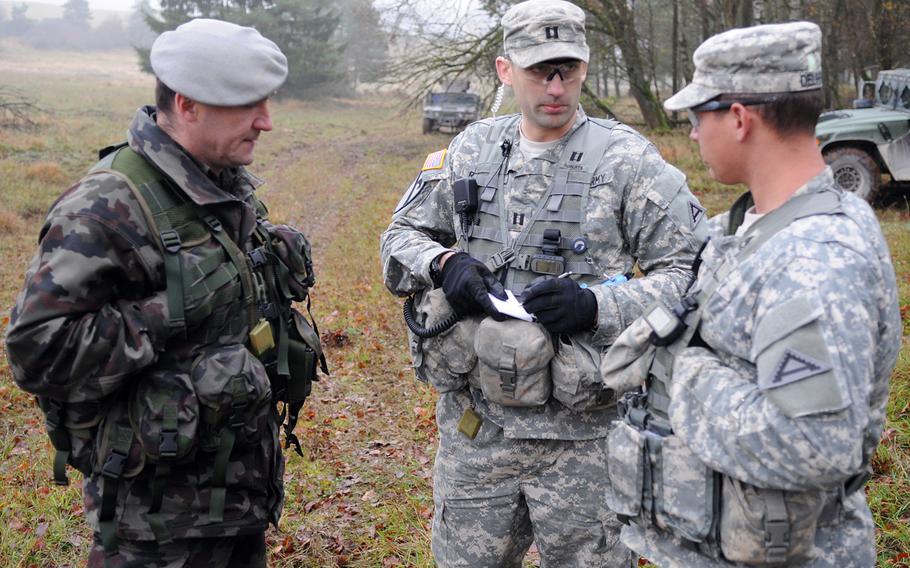 Buy Photo
Capt. Brice Roberts, an observer controller at the Joint Multinational Readiness Center in Hohenfels, Germany, consults with Slovenian Maj. Dragomir Cevriz and Army Sgt. 1st Class Levine Delprado on Nov. 14, 2013, during Combined Resolve, which aims to bolster the interoperability of U.S. and European troops. Roberts, center, and his partners are reviewing the performance of a Slovenian mortar company. (John Vandiver/Stars and Stripes) 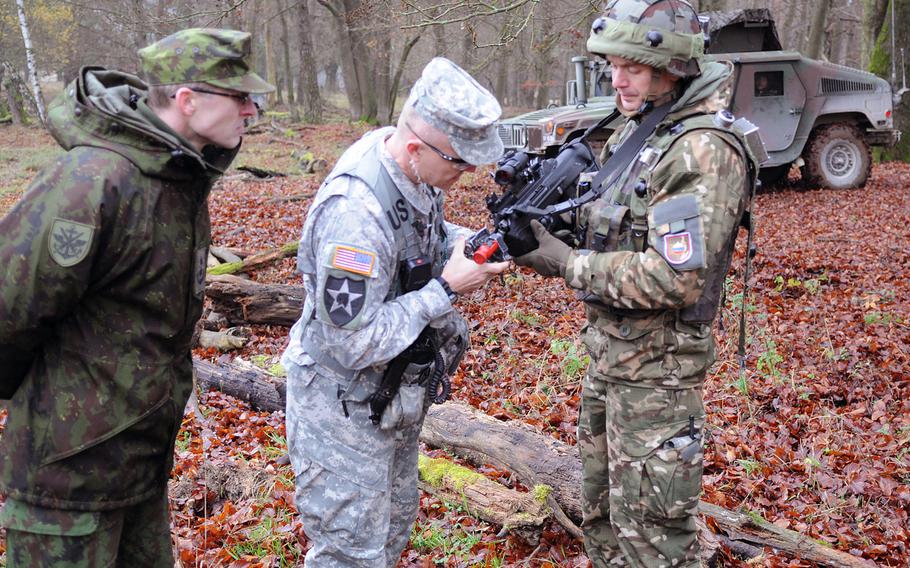 Buy Photo
Col. John Norris, commander of the Multinational Readiness Center in Hohenfels, Germany, inspects the weapon of a Slovenian soldier on Nov. 14, 2013, during the exercise Combined Endeavor. One challenge for troops is getting U.S. scopes to work together with European systems. (John Vandiver/Stars and Stripes) 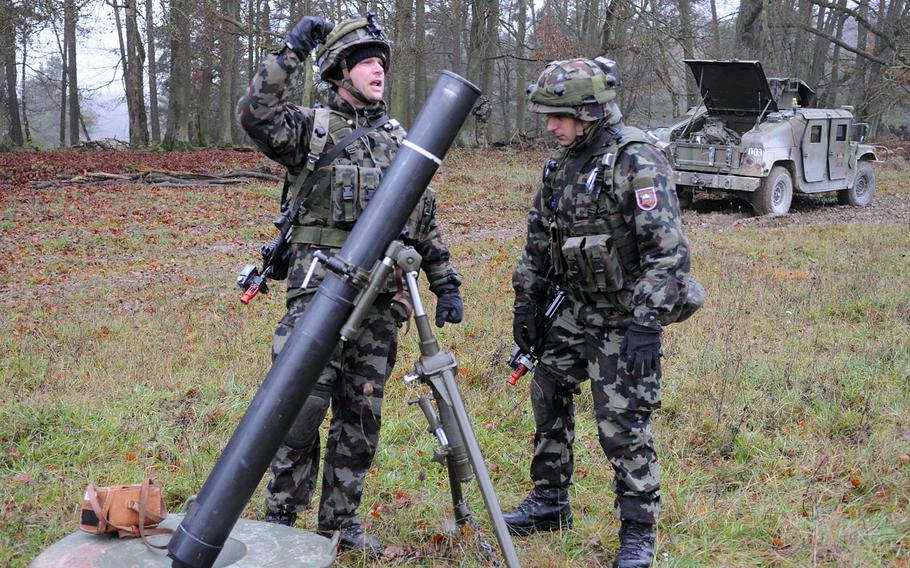 Buy Photo
Slovenian troops set up mortars Nov. 14, 2013, at the Joint Multinational Readiness Center in Hohenfels, where 1,200 soldiers from the U.S. and other European countries are taking part in Combined Resolve, an exercise that tests the capability of a multinational combat brigade. During the exercise, observer controllers critique the tactics of the units involved. The exercise runs from Nov.7-Nov. 24. (John Vandiver/Stars and Stripes) 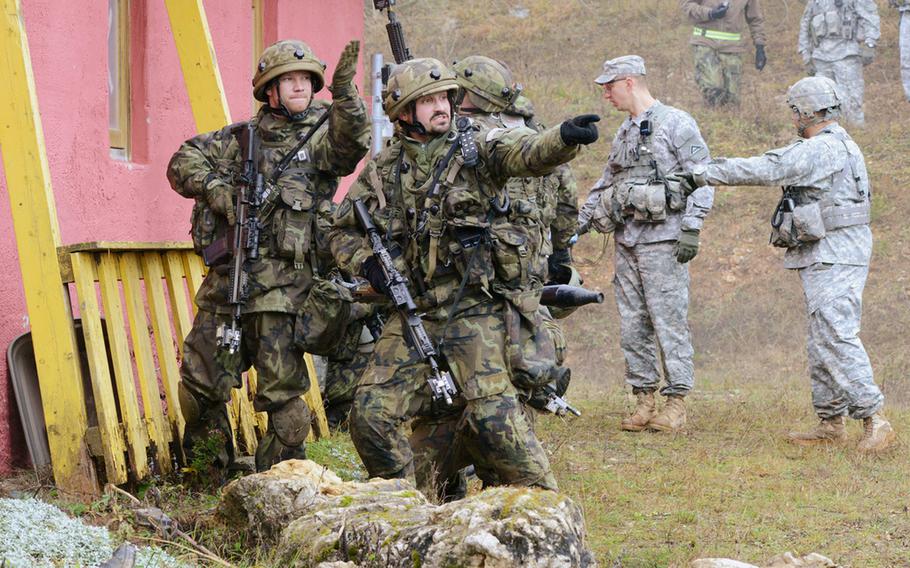 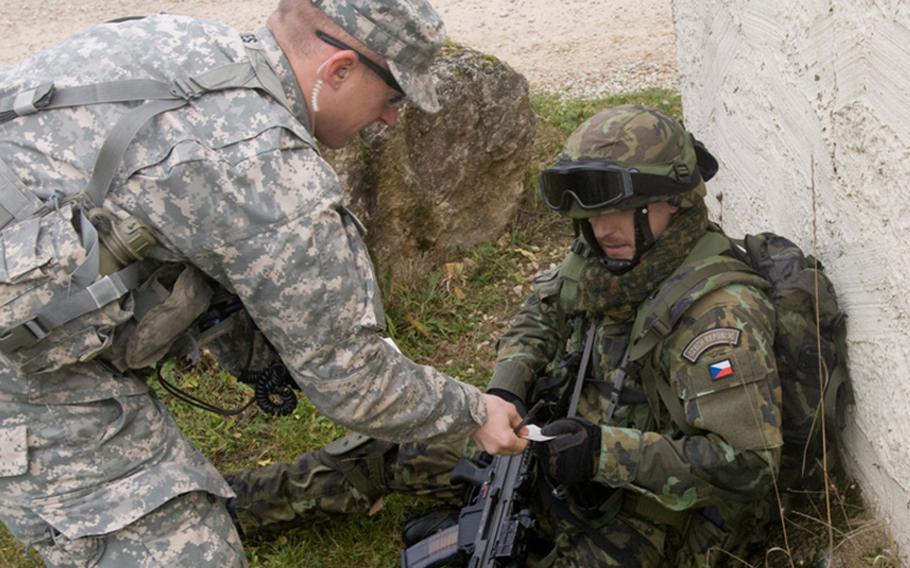 A U.S. observer/controller hands a casualty feeder card to a Czech soldier during an urban warfare exercise on Nov. 11, 2013, at at the Hohenfels Training area, Germany. Casualty feeder cards show any simulated injuries a soldier has sustained to allow his fellow soldiers training in giving first aid. (Andrew Guffey/U.S. Army) 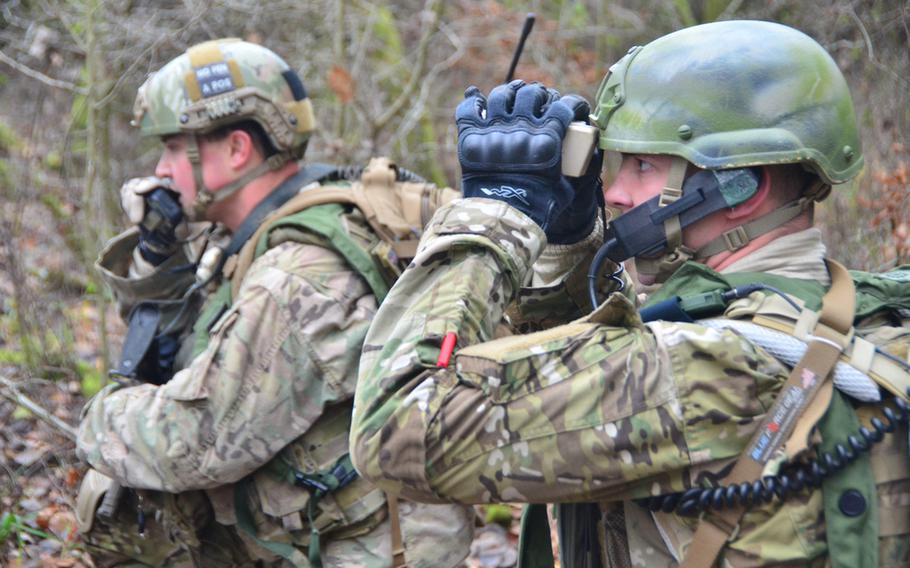 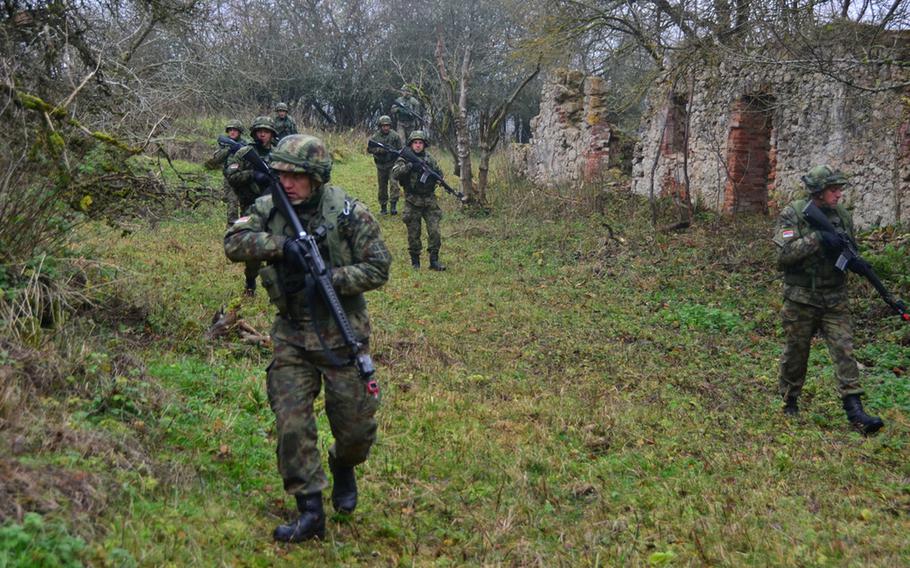 Serbian forces maneuver toward their objective during the Combined Resolve exercise Nov. 17, 2013, at the Joint Multinational Readiness Center in Hohenfels, Germany. The intent of the exercise is to train and prepare U.S. led multinational brigades to interoperate with multiple partner nations against a complex threat. (Brian Chaney/U.S. Army) 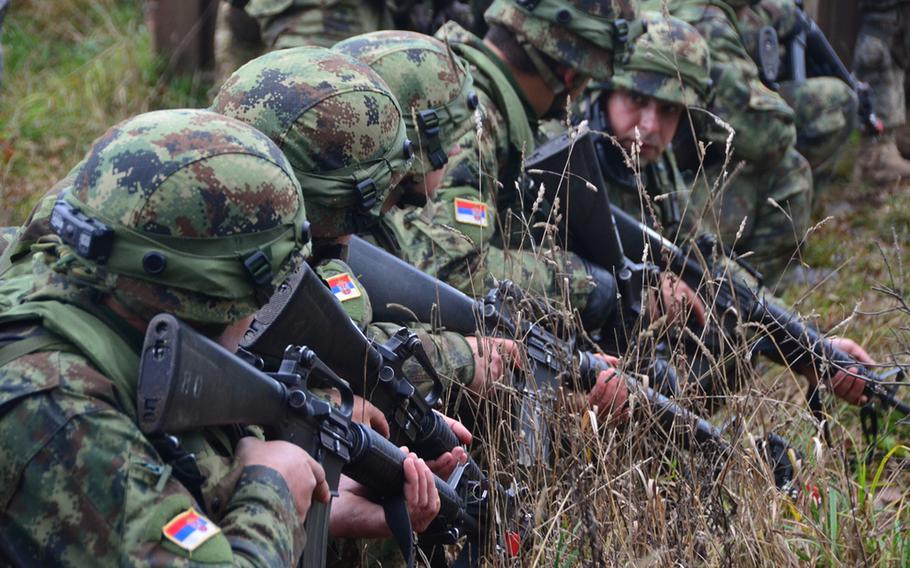 HOHENFELS, Germany — The troops picked a good location to set up their mortars, down in a valley near the cover of a ridgeline.

But the shouts from the Slovenian mortar men, echoing off the hillside, threatened to give away their location.

“They need a middleman to deliver the instructions back and forth to each other,” said Army Capt. Brice Roberts, an observer controller at the Joint Multinational Readiness Center in Hohenfels. “They picked a good location to set up, but the enemy will hear them if they shout like that.”

Slovenian Maj. Dragomir Cevriz, also observing the mortar team’s maneuvers from a distance, offered up another mild critique. “Their security should be moving their position more, not standing still,” he said.

Such scenes are playing out daily at the rugged training grounds in Hohenfels, Germany, where the Joint Multinational Readiness Center is hosting one of its largest multinational training exercises in recent years. As the war in Afghanistan winds down, such training initiatives will play a key role in ensuring allies don’t lose hard-earned combat capabilities achieved during a decade of war, U.S. commanders say.

The two-week exercise, which brings together 1,200 U.S. and European troops, tests the ability of soldiers to work as a single multinational combat brigade.

Col. John Norris, the director of Combined Resolve and commander of the Joint Multinational Readiness Center, said the training grounds in Europe are key to ensuring that the U.S. and allies can fight alongside each other.

“Because of our location in Germany, that’s why we’re value added,” said Norris, who noted that many smaller European partners couldn’t afford costly trips to the Army’s U.S. training centers. “This kind of training is not happening anywhere else in the world.”

Battalions of Czech and Slovenian troops, a U.S. headquarters unit and a host of other forces, including U.S. National Guard troops from California, have been war gaming around the clock inside Hohenfels’ sprawling battleground known as “the box.” Rather than training to take on the Taliban in Afghanistan, they’re working on other combat scenarios, such as taking on a conventional enemy force in the Caucasus region. “We don’t know what the future threats are going to look like, but we do know one thing; we aren’t going to fight it alone,” said Brig. Gen. Walter Piatt, head of the Joint Multinational Training Command. “We’re going to fight with our partners. If we don’t train together we’re never going to do it live.”

Combined Resolve, which was to conclude Nov. 24, also is serving as a test run for the new European Rotational Force concept that aligns a U.S.-based brigade with Europe for periodic training missions on the continent.

Elements from the U.S.-based 1st Cavalry Division were initially slated to take part in Combined Resolve, but the crippling budgetary effects of sequestration put that deployment on hold. Instead of canceling the program, U.S. Army officials called upon the 173rd Infantry Brigade Combat Team (Airborne) in Vicenza, Italy, which, along with battalions from the Czech Republic, Slovenia and a host of other nations, pushed the mission forward.

“It just goes to show you the importance of having U.S. Army forces in Europe, and this training center here forward. Location counts for something. It matters,” Piatt said.

Piatt said he expects the U.S.-based rotational force to be in Hohenfels in May to pick up where Combined Resolve leaves off.

For the Army, a U.S.-based brigade that is aligned to Europe is aimed at offsetting the recent elimination of two forward deployed brigades in Europe, where only two units remain – the 173rd and the 2nd Cavalry Regiment in Vilseck.

The plan is for the rotational force to pick up the slack of the departed 170th and 172nd Infantry Brigades by participating in exercises such as the recently completed Steadfast Jazz in Poland, which tested the capabilities of NATO’s response force, as well as missions at Army training centers in Germany.

Some critics have questioned the shift to a more rotational presence in Europe, saying the smaller footprint overseas could send the wrong signal to allies, many of whom have been partners in missions stretching from Afghanistan and Libya to counterpiracy efforts around the Horn of Africa.

Others counter that the U.S. military presence in Europe is too large given the end of the Cold War and current fiscal constraints. The mission in Europe often finds itself under the microscope, with members of Congress routinely calling for additional reductions in the overseas presence.

For the U.S. Army, the training grounds at Grafenwöhr and Hohenfels remain the centerpiece of its shrinking, but still sizable, presence in Europe. U.S. commanders at the JMTC and Joint Multinational Readiness Center are now emphasizing the benefits of the area, which they say helps ensure the readiness of U.S. and allied forces.

For a decade, the JMTC’s existence was easy to justify. Since 2001, its trainers were tasked with preparing Europe-based Army troops for the wars in Iraq and Afghanistan. But with the drawdown of U.S. forces in Europe and the end of the combat mission in Afghanistan, it’s a new era. The mission is now more nuanced: solidifying military partnerships and “interoperability.”

Piatt said the key is finding ways to operate more economically. One measure aimed at cutting down costs is to have allies and U.S. rotational forces forward position heavy equipment at the JMTC training grounds rather than hauling gear back and forth for training events.

As the U.S. comes to rely more on rotational forces in Europe, such measures will help cut down on transportation costs, making the location a more attractive destination for U.S. and European forces, officials said.

“Once you’re here, you live like a soldier, and that is very inexpensive,” Piatt said. “As a soldier, it doesn’t cost a lot of money to walk up a terrain feature here in Hohenfels in the rain and the cold. You get great training in that.”

Preparing troops for war in Iraq and Afghanistan was a more costly enterprise as trainers at JMRC attempted to replicate the war experience. Fake villages were established, contractors were hired to play the roles of tribal leaders and Forward Operating Bases needed to be imitated. Combined Resolve, however, aims to prepare troops how to respond to a crisis and operate in hotspots where there is no established allied presence.

“There’s some language difficulties, there’s some radio communication difficulties, but soldiers speak the same language regardless of what nation they are from,” Piatt said. “You’re out in the dirt, it’s muddy, it’s cold, it’s raining. You don’t need a translator for that, and it takes a soldier to endure those hardships.”

In the field, collaboration is key to being prepared for future, unknown conflicts, troops say. Whether in Europe or beyond, U.S. allies in NATO are likely to be in the fight together, said Lt. Col. Anze Rode, commander of the Slovenian regiment training in Hohenfels.

“The future operations will be joint and combined,” said Rode, a graduate of the U.S. Army’s Ranger school who served alongside Americans in Afghanistan. “I am sure we will be deployed somewhere together. So if you want to fight together, you have to train together. We have to synchronize our procedures.”

Small countries like Slovenia are eager to take part in more expeditionary missions, according to Cevriz, the Slovenian observer at Combined Resolve.

“The older generation was focused on defending the country, protecting what we have. The younger generation is looking outside as a security provider,” Cevriz said. “We’re a small country and a small army, so this opportunity here [in Hohenfels] is very precious for us. This is the only way to keep the operational effectiveness.”

During a recent visit with Slovenian troops, Piatt reflected on the changes he’s witnessed in Europe over the years. As a young soldier during the Cold War, Piatt studied the equipment of the opposing force, such as the Soviet T-72 tank.

Now, the T-72 is maneuvering on the grounds at Hohenfels, part of the multinational brigade that is training together.

“This is what peace looks like,” Piatt said. “Why we are here is much different now. We are not here as a major ground force. We are here as a partner. Europe and NATO is a security provider.”