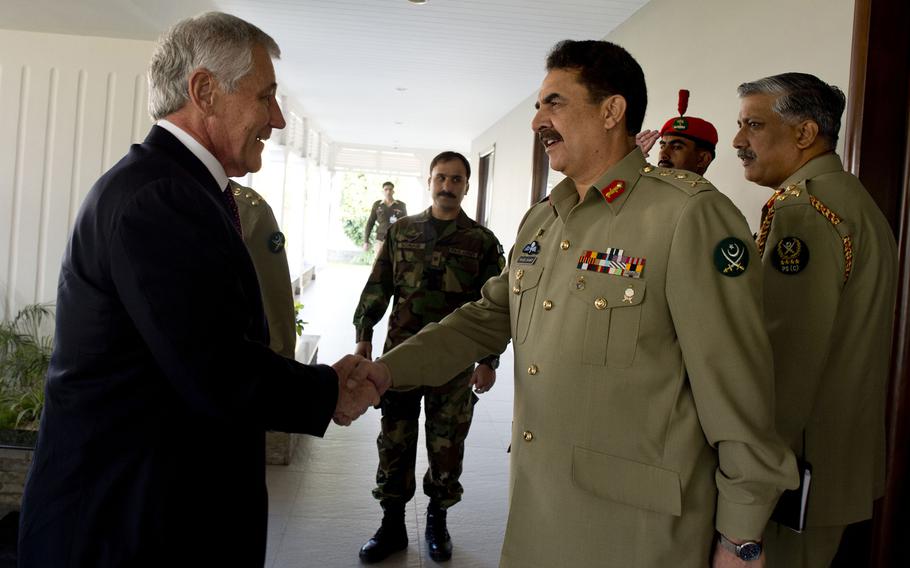 Hagel met first with the newly installed chief of Pakistan’s powerful army, Gen. Raheel Sharif, who was elevated to command in late November. He met later with a group of Pakistan’s top civilian officials, including Prime Minister Nawaz Sharif, who took office in June, and Minister of Defense Khawaja Asif.

It is the first visit to Pakistan by a U.S. defense secretary since Robert Gates’ visit in January 2010. Hagel traveled later Monday to Saudi Arabia for meetings to discuss regional security issues with Saudi Crown prince Salman bin Abdulaziz al-Saud and other Saudi officials.

In Pakistan, Hagel acknowledged the support that country has provided in the war against terrorism. But he stressed the need for better relations with Afghanistan, and better border controls to stop insurgents from mounting attacks on Afghan and U.S. targets that originate from safe havens in Pakistan.

Hagel and the crown prince discussed regional security issues including the effort to keep Iran from obtaining nuclear weapons, the violence in Syria and the future of Afghanistan. Hagel repeated the message he has been repeating on this trip – that the United States has no plans to withdraw its forces or influence from the Middle East.

For his part, Prime Minister Sharif raised the issue of U.S. drone strikes on Pakistani soil that target suspected insurgents. The operations have stirred public anger and accusations that innocent civilians are being killed.

Sharif confirmed his support for the peace and reconciliation process in Afghanistan, but “conveyed to Pakistan’s deep concern over continuing U.S. drone strikes, stressing that drone strikes were counter-productive to our efforts to combat terrorism,” Agence France-Presse reported.

Sharif is serving his third stint as prime minister. His second term ended in a military coup in 1999, and he has clashed with the influential Supreme Court, too, so there are questions about his ability to forge any kind of consensus on even the most basic issues in the divisive, poverty-wracked Muslim country.

Neither country’s officials committed Monday to changing their approach to countering terrorism, but both sides reportedly agreed to continue working through the problems.

“There are some differences there,” a defense official acknowledged.

Pakistani officials did agree on the need to ensure ground routes through Pakistan are open to shipments of U.S. and coalition war materiel into and out of Afghanistan. The routes are key to the U.S. retrograde effort to remove equipment by the end of formal combat operations on Dec. 31, 2014.

Hagel told Pakistani officials that keeping open the supply lines — known as ground lines of communication — may be key to continued U.S. military aid to Pakistan.

Officials said it was not meant as a threat, but acknowledgement of the fact that continued supply route problems could make it politically difficult in Washington to continue supplying coalition support funds to support Pakistan’s operations against extremists. The payments total some $10 billion since 2001, officials said.

“This was an issue that the secretary raised, particularly in connection with continued coalition support funds being distributed to Pakistan,” a defense official said. “And the secretary made the point that, look, continuing the ground lines of communication is critical to our relationship.”

Speaking before the series of meetings, a senior defense official said both the United States and Pakistan are serious about fighting terrorism. But their priorities don’t line up completely because the groups that threaten Pakistan aren’t necessarily the same ones that threaten Afghan and U.S. troops, and vice versa.

Creating a definition of terrorism and extremism that serves the interests of both countries is one of Hagel’s goals, the official said.

But C. Christine Fair, who studies South Asian security issues as an assistant professor at Georgetown University’s School of Foreign Service, said that despite defense officials’ hopes, the United States and Pakistan were unlikely to find common ground on battling extremists.

“Pakistan’s enemies (India for example) are our most trusted partners in the region,” Fair wrote in an email. “Our enemies” — including the Haqqani Network and Lashkar-e-Taiba — “are Pakistan’s allies. Pakistan fears India’s presence in Afghanistan and seeks to retard India’s rise. The ONLY tools Pakistan has to do this is Islamist militants, which the US considers to be terrorists.”

Hagel, who is in the midst of a five-country trip to the Middle East and Southwest Asia, was scheduled to meet officials in Qatar on Tuesday, as well as interact with U.S. troops at al-Udeid Air Base, before flying back to Washington.