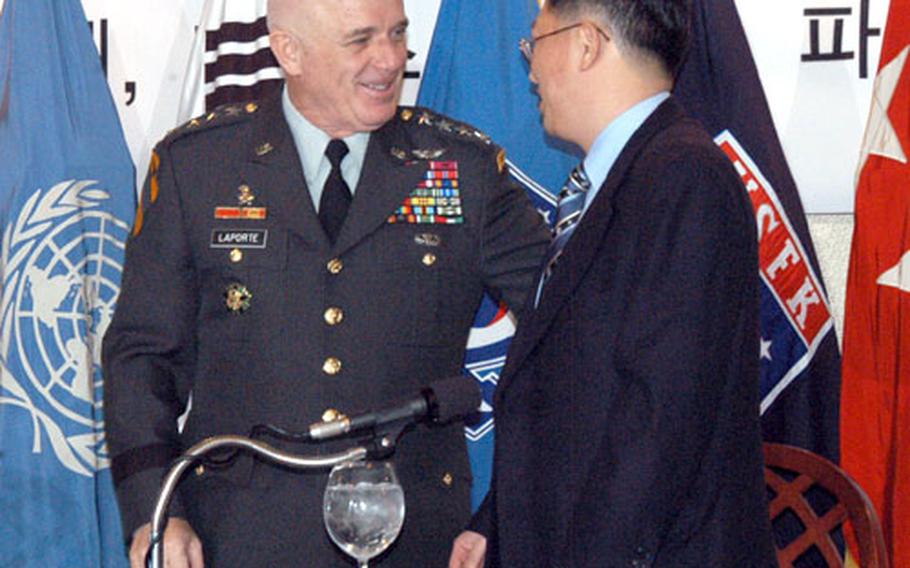 Gen. Leon J. LaPorte, the top U.S. military commander in South Korea, greets Yu Yong-weon, a Korean journalist and military Webmaster who moderated a discussion Wednesday night between LaPorte and other Korean military experts. The discussion, which was carried live as an Internet chat in Hangul, the South Korean alphabet, was the general’s second online discussion with Koreans in the past year. (Teri Weaver / S&S)

YONGSAN GARRISON, South Korea &#8212; The 85-minute Internet chat Wednesday night with the top U.S. military official in South Korea had room for just 14 questions, and inquisitors wasted no time getting to the No. 1 topic here in recent days: North Korea&#8217;s proclamation that it has nuclear weapons.

&#8220;That is an excellent question,&#8221; USFK commander Gen. Leon J. LaPorte began when asked for his assessment. &#8220;Kim Jong Il is in a better position to answer that question,&#8221; he added, drawing soft laughter from the journalists and Korean citizens gathered in the Hartwell House restaurant on the U.S. main military post in South Korea.

The four-star general grew serious, however, as he tried to convince panelists and the Korean Internet users watching the chat that U.S. and South Korean militaries are prepared for any threats from the Pyongyang regime.

He used the forum &#8212; his second Internet chat with South Korea in a year &#8212; to urge North Korea to return to the six-party nuclear disarmament talks, echoing what many U.S. leaders have said since the Feb. 10 announcement from Pyongyang that the country has developed nuclear weapons.

The panelists &#8212; six men whose expertise in journalism, scholarship and business revolves around the military &#8212; used the forum to probe LaPorte about issues including USFK&#8217;s future plans and the U.S. military&#8217;s ability to sustain Iraqi operations while protecting South Korea.

One panelist asked whether the United States has pledged almost 700,000 troops to the peninsula should North Korea attack, as a recent South Korean government white paper outlined.

LaPorte didn&#8217;t speak to the numbers, instead stressing that the United States remains committed to South Korean security and eventual self-reliance.

Both U.S. and Republic of Korea militaries have improved their technology and weapons capability, especially in the past five years, he said, making troop numbers just one factor in peninsula defense.

LaPorte did offer some specifics. He repeated statistics stating USFK&#8217;s numbers decreased by about 5,000 in 2004 and should decrease by another 3,000 this year. He said the 2nd Infantry Division has almost completed a year of training and realignment to take advantage of more sophisticated weaponry and tactics. And he praised South Korean military forces while reminding the crowd that their own nation&#8217;s plans include mobilizing up to 2 million troops if needed.

Another question came from Baek Ji-sun, 25, a student at Sookmyung Women&#8217;s University in Seoul. She asked what LaPorte was doing to stem crimes committed by USFK members.

LaPorte said he orders his commanders to instruct troops about their behavior. He also noted that the South Korean government recently released figures showing that crimes among USFK members were down by a third.