In Musa Qala, a bright spot among the national police 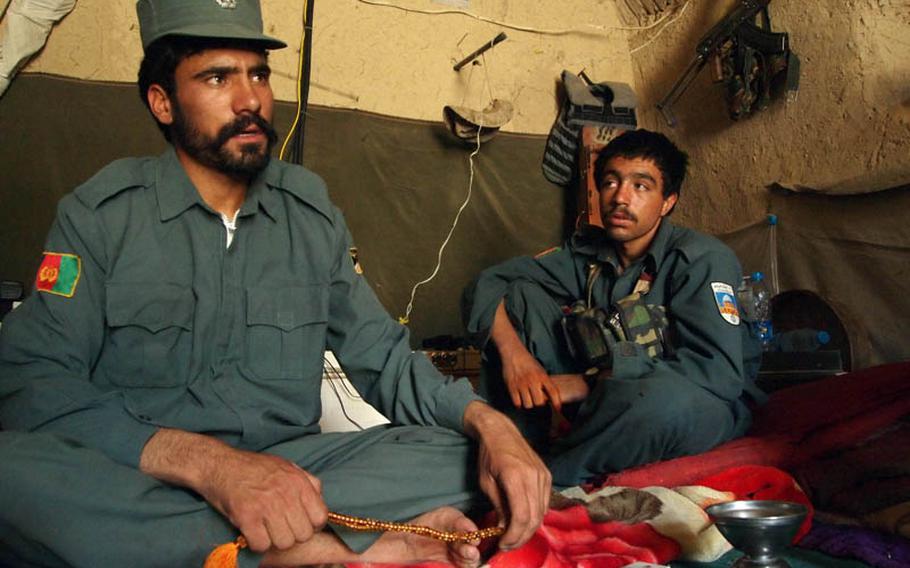 Buy Photo
Nooroz Waly, left, who commands 30 police in northern Musa Qala district in Helmand province, has taken the initiative in trying to round up Taliban threatening his village. (Matt Millham/Stars and Stripes)

They actually want to fight.

Working in a part of the district where most locals are so scared of the Taliban that they can&rsquo;t even muster a teacher for the local school, the Afghan National Police in Karimanda are begging the U.S. Marines with whom they share a patrol base to go along with them as they try to ambush Taliban fighters to their north.

Dressing in local garb to blend in, a small band of Afghan police last week wandered into enemy-held territory alone and set up an &ldquo;illegal&rdquo; checkpoint &mdash; a typical Taliban tactic &mdash; in an effort to entice real Taliban to come out to see what was up.

While the ruse didn&rsquo;t work &mdash; Staff Sgt. Josh Wartchow, a platoon sergeant from Doylestown, Pa., who shares a base with the police, thinks they were somehow compromised &mdash; the effort was an unusual display of initiative taken by members of a force more routinely associated with absenteeism, drug use and over-reliance on foreign assistance.

Based on that reputation, Wartchow thought the Afghan forces assigned to his base, Patrol Base Griffin, were just going to go through the motions. But he says they&rsquo;re the best he&rsquo;s seen in two tours in Afghanistan, and better than those he worked with in Iraq.

&ldquo;They know we&rsquo;re not going to be here forever, and that&rsquo;s why I think this group is so adamant about helping out with everything,&rdquo; Wartchow said. &ldquo;They&rsquo;re real motivated to go out. They take real pride in the town because they&rsquo;re all from this general area, so they know the people out in town; they&rsquo;ve established good relationships with them as well.&rdquo;

The police have their own vehicle checkpoint in Karimanda, which Wartchow&rsquo;s Marines typically support because the Afghans lack some gear, such as night-vision goggles, he said.

&ldquo;But recently the new ANP commander that we have has asked us not to go there every night because he wants his men to start standing a lot of post and getting used to it,&rdquo; he said.

That new commander, Nooroz Waly, is also the impetus behind the ambushes, which he plans to continue until he&rsquo;s captured all of the 50-or-so Taliban known to hide somewhere north of Karimanda.

He&rsquo;s also leading an effort to recruit local police, which will help fill a personnel gap that, while it exists, would prevent Marines from handing security for this sector over to a wholly Afghan force.

&ldquo;Because I am an ANP, if there are problems here it is my responsibility,&rdquo; Waly said, &ldquo;and I will solve it.