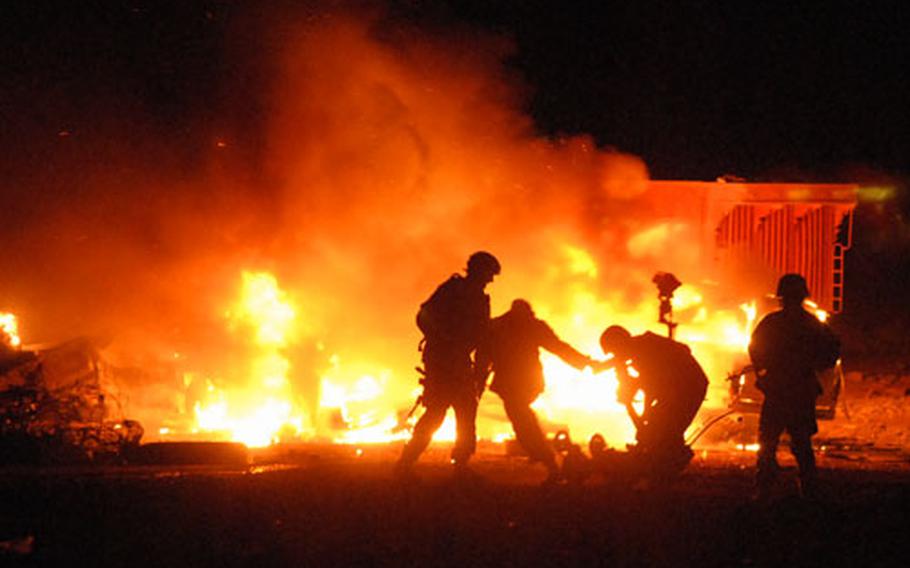 Iraqi and American soldiers haul away a bomb squad robot after a pickup truck exploded while the robot was searching it. The robot was able to limp along under its own power once the soldiers set it down on the road. (James Warden / S&S)

Iraqi and American soldiers haul away a bomb squad robot after a pickup truck exploded while the robot was searching it. The robot was able to limp along under its own power once the soldiers set it down on the road. (James Warden / S&S) 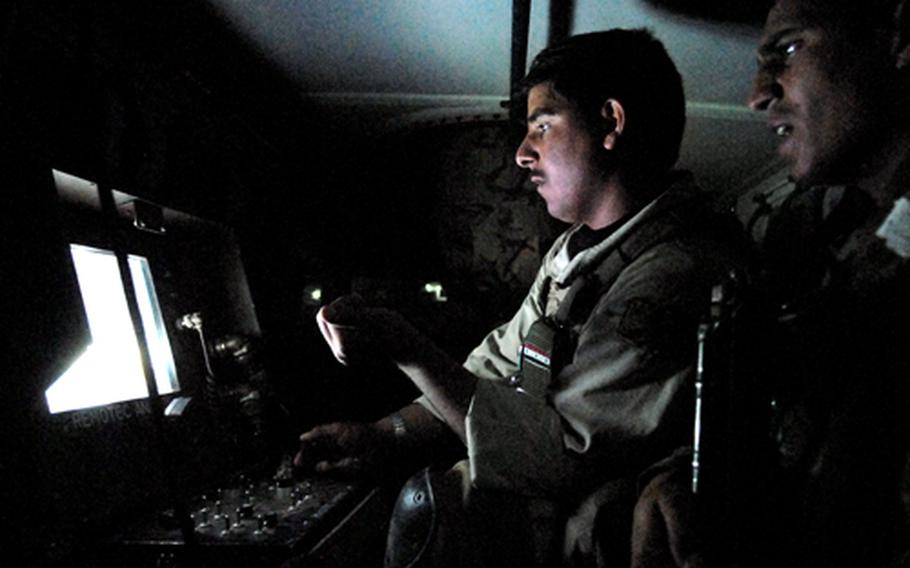 Iraqi army bomb squad members maneuvered the robot to a pickup truck that an Iraqi source said had been rigged as a bomb late Friday in Mosul. The soldiers used the robot’s camera to search all around the pickup but couldn’t see evidence of explosives. So they moved onto a vehicle parked next to the pickup. (James Warden / S&S) 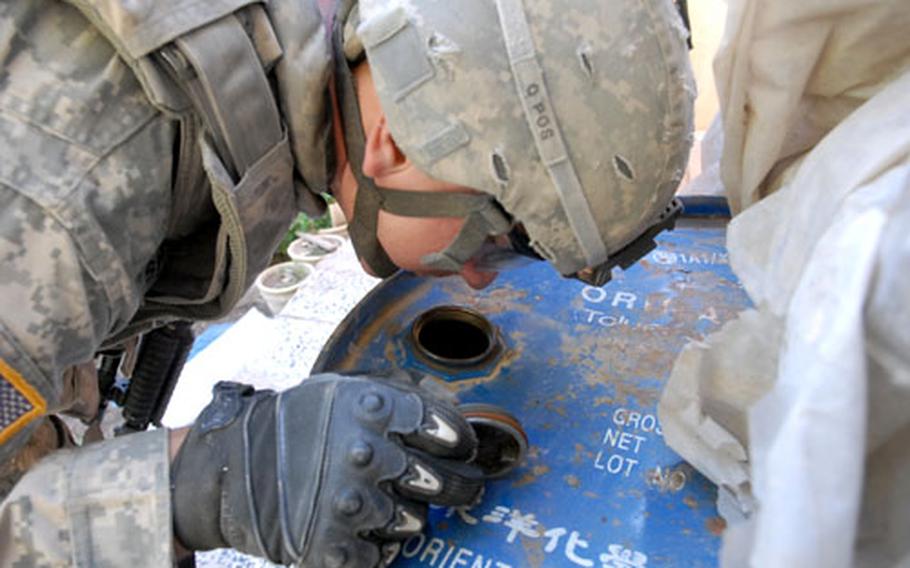 Sgt. Christopher Sherman cautiously sniffs an oil barrel Saturday at a home along the border of Mosul’s 17th Tamooz and Al Kubra neighborhoods. Insurgents sometimes hide homemade explosives inside oil barrels, so Sherman thumped the side of the barrel, peered inside and sniffed it to make sure that it really did contain oil. (James Warden / S&S) 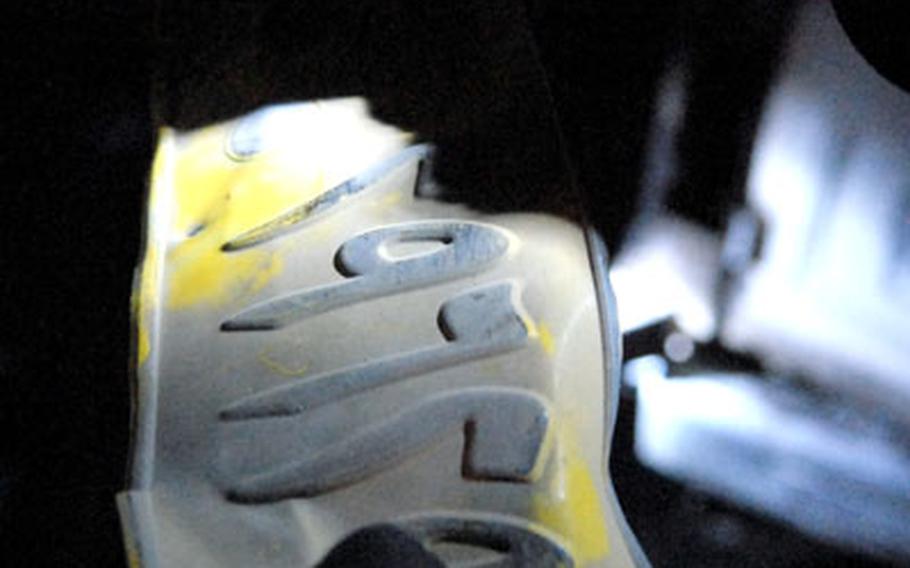 A soldier holds a license plate thought to have come from the pickup truck that exploded after searching the bomb site for evidence. Investigators will try to use the license plate to track down the person who owned the pickup. Iraqi Army soldiers also detained the owner of the parking lot for questioning. (James Warden / S&S) 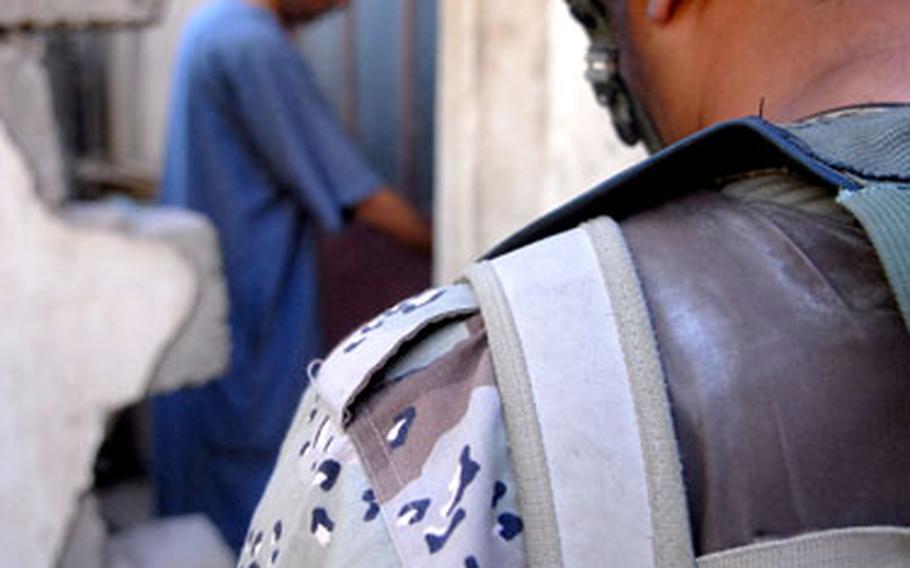 An Iraqi Army soldier waits for a Mosul resident to unlock a storage shed Saturday during a search of the 17th Tamooz and Al Kubra neighborhoods. A host of new combat outposts have helped give Iraqi soldiers the freedom and security they need to conduct such searches. (James Warden / S&S)

Sherman, a soldier with Lightning Troop, 3rd Squadron, 3rd Armored Cavalry Regiment, encountered about half of those on a 1-kilometer stretch of Mosul&#8217;s Route Santa Fe. The road twists in such a way that American observers at an Iraqi checkpoint couldn&#8217;t watch the middle of this stretch without sending soldiers outside the wire on 24-hour observation missions.

But that was before American soldiers plopped down a combat outpost &#8212; or COP &#8212; in the middle of the dangerous route. Where insurgents once could secret away bombs in a space invisible to coalition forces, Iraqi and American soldiers can now watch the area continuously from behind the security of their own walls.

Sherman hasn&#8217;t encountered a roadside bomb in the area since.

The Santa Fe combat outpost is one of 40 in the Mosul area, compared with 11 before the 3rd Armored Cavalry Regiment arrived in December.

Soldiers joke that the strategy has become they plant a roadside bomb, we plant a COP. But they credit the COPs with the sharp drop-off in attacks since they arrived. Where tanks once had to patiently guard a road and wait for insurgents to come to them, the soldiers can now take the initiative and get out in the community.

It&#8217;s not reactive, it&#8217;s pro-active, said 1st Lt. John Parlee, a Lightning Troop platoon leader. Now that these COPs are in place, the Iraqi Army can move more fluidly and more effectively in their area of operation.

Combat outposts are a step down in size and amenities from the forward operating bases where soldiers spent much of their time during the initial years of the war. Mosul&#8217;s Forward Operating Base Marez, for example, is a sprawling complex complete with a Burger King, recreation center and shoppette.

Combat Outpost Hotel, on the other hand, is the former home of one of Saddam Hussein&#8217;s cousins that is now inhabited by a platoon of Americans and a larger group of Iraqi Army soldiers. The Americans sleep in a room full of metal bunk beds that also serves as their kitchen and tactical operations center. They live off food heated by adding water to a heating packet. And instead of weights, they work out using their body armor.

Other COPs are occupied solely by the Iraqis, although they can be a welcome haven for American troops if something goes wrong in the middle of a patrol. Like the Americans, the Iraqi army has embraced the concept and started building even smaller complexes at key parts of town that Parlee calls sub-COPs.

Lightning Troop platoons rotate through the two COPs, spending two days at a time at each and then rotating back to Marez to do missions from there. While the living is rougher, Sherman, like many soldiers, said they have cut much of the workload.

Platoons go on at least one mission with the Iraqis a day and usually spend the rest of their time at the COP on standby in case another unit encounters trouble, which is becoming less and less frequent.

"We put them in all the worst parts we have, so it decreases a lot of the stuff we have to do," Sherman said.