In meeting with servicemembers, Hagel defends troop and compensation cuts 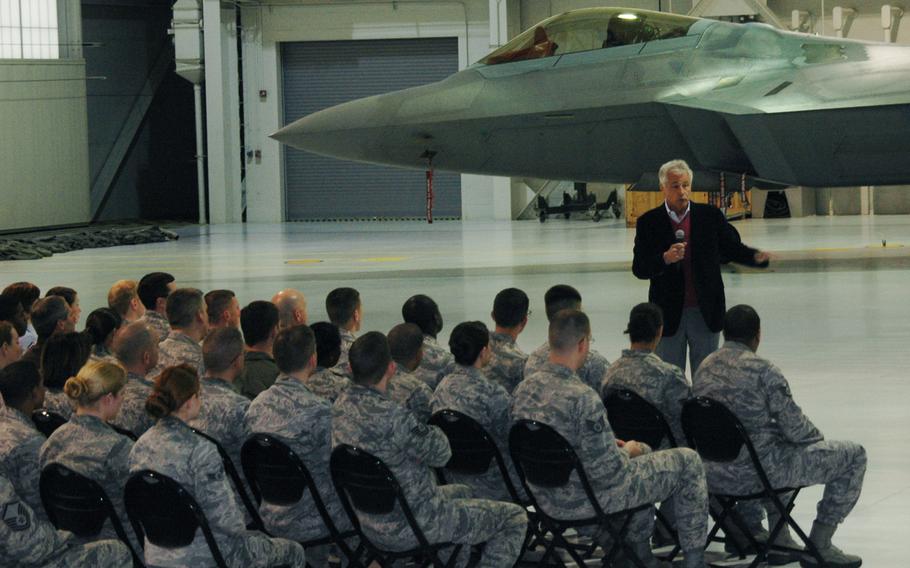 Defense Secretary Chuck Hagel, speaking to airmen at Joint Base Langley-Eustis in Virginia, talks about the proposed 2015 budget on Feb. 25, 2014. (Jon Harper/Stars and Stripes)

JOINT BASE LANGLEY-EUSTIS, Va. — A day after unveiling a preview of next year’s defense budget, which calls for reductions in compensation and large cuts to troop levels, Secretary of Defense Chuck Hagel was bombarded with questions by anxious servicemembers concerned about the impact of the changes.

Hagel pushed back strongly against the implied criticism, and defended the budgetary decisions as necessary in a time of strategic change and fiscal austerity.

A soldier asked Hagel about the risks of going down to pre-World War II troop levels. Hagel announced Monday that the Pentagon wants to further decrease the size of the active-duty Army to about 440,000 troops.

“I think it’s really a bogus comparison to compare the Army of pre-World War II in the United States versus the Army today,” Hagel said. “Look at the capability difference — what per person you are trained to do, what you’re equipped to do, how you’re led, the equipment that you have, the modernization, the technology versus what our Army looked like in 1939 and 1940. I mean, there’s no comparison … Many other parts of that comparison I don’t think could stand any true test of anything.”

“This is not new, the reduction in forces … At the end of every war that this country has ever been in, that’s the way it works,” he said. “If you’re not in a war, your [manpower] requirements are different … We’re out of Iraq, we’re coming out of Afghanistan.”

Hagel told the soldiers that keeping higher troop levels would degrade the quality of the force because compensation for the additional soldiers would crowd out important warfighting investments.

“We cannot allow a so-called hollow force or too many members just to … say that we’ve got so many members,” he said. “That’s not fair to the members who stay in … We don’t have an unlimited bin of resources here that we can’t continue to keep everybody trained and compensated. This is what’s referred to often as the hollow force. You have a lot of people and you can even compensate them, but at some point you’re going to have to invest big dollars in the technological edge that we have had since World War II over any adversary … We never, ever must let that erode.”

A soldier asked Hagel how the military could continue to recruit and retain high-quality people if compensation and benefits were cut.

“Why did you decide to [join the military]?,” Hagel asked. “I doubt if it’s for the pay or the compensation and the benefits and even the glory. You [are] volunteering for something more important than that.”

Hagel went through the proposed pay and benefits cutbacks that were unveiled Monday, and provided additional details.

In an effort to slow compensation growth, the Pentagon wants to do the following to reduce personnel costs:

Basic pay for servicemembers would rise by only 1 percent in Fiscal 2015, and pay increases could be as low as 0.5 percent in future years. Cut housing subsidies by 5 percent over the course of a few years, from 100 percent to 95 percent. Hagel said that in the late 1990s, servicemembers paid up to 20 percent of their housing costs out-of-pocket. Cut commissaries subsidy from $1.4 billion annually to $400 million. Overseas commissaries and those in remote locations will continue receiving direct subsidies. “We’re not closing any commissaries,” Hagel said. Increase Tricare co-pays for working-age military retirees and family members of active-duty servicemembers over the next five years. Hagel said the average co-pay for retirees today is 8 percent, but that needs to increase to 11 percent. Hagel did not specify how much co-pays would increase for family members of active-duty servicemembers. “It wouldn’t change [health care costs for] active duty members. It wouldn’t change [anyone’s] preferred providers or [cause anyone to] lose any rights. It wouldn’t change the quality [of your health care],” he said. Disabled veterans would be exempted from any co-pay increases, according to Hagel. DOD will wait until the Congressionally empaneled Retirement Commission presents its report before making any recommendations about changes in retirement benefits. But Hagel promised that any reductions in this area would be not apply to people who have already joined the military.

The Pentagon is also proposing another round of base closures, a process known as BRAC, to save money.

“Do you really want to carry that kind of an [excess] inventory and overhead? ... It’s not fair to you because what that means, that’s less training for you; that’s less compensation, less money, less everything for you,” he told the troops.