At a memorial plaque at the city airport in Mannheim, Germany, Peter Kibble-White finds the name of his son Paul, a Welsh skydiver who died in a U.S. helicopter crash on Sept. 11, 1982. (Rick Scavetta / S&S)

At a memorial plaque at the city airport in Mannheim, Germany, Peter Kibble-White finds the name of his son Paul, a Welsh skydiver who died in a U.S. helicopter crash on Sept. 11, 1982. (Rick Scavetta / S&S) 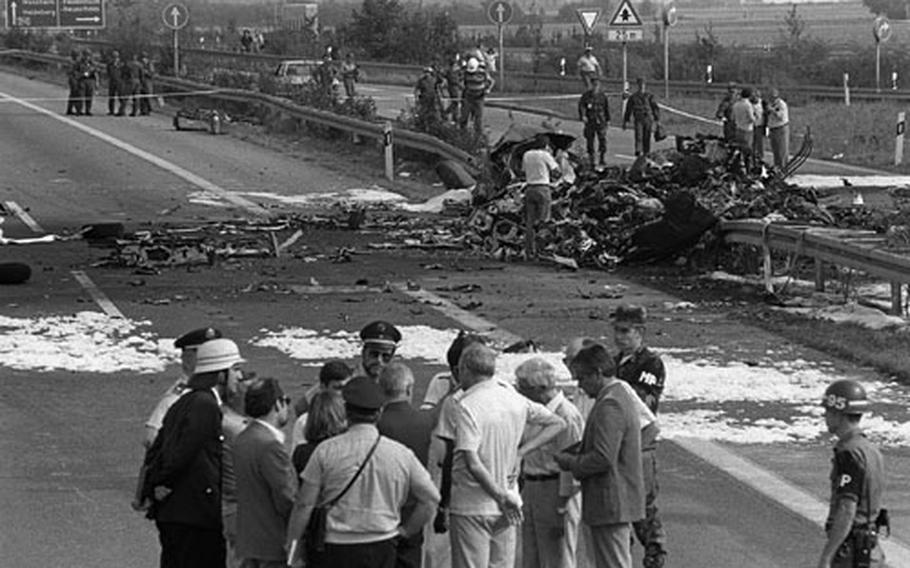 Wreckage of a U.S. Army CH-47 Chinook helicopter litters the autobahn after the helicopter crashed near Mannheim on Sept. 11, 1982, killing all 46 persons on board. (Stars and Stripes)

On Sept. 11, 1982, a CH-47 Chinook helicopter from the Coleman Barracks-based 295th Assault Support Helicopter Company was carrying skydivers from France, Germany and Wales when it plummeted 600 feet to the ground during an air show marking Mannheim&#8217;s 375th anniversary.

Forty-six people were killed, including seven U.S. troops. Five were Chinook crewmembers, while two others were American Forces Network soldiers assigned to cover the jump.

About two dozen family members and community leaders marked the 21st anniversary of the crash beside a carved stone obelisk adjacent to the airport entrance. The names of the dead are engraved on a marker at the foot of the memorial. The somber crowd then gathered in a nearby restaurant where some recalled the horror of watching their loved ones trapped inside the falling helicopter.

That day, thousands of spectators had gathered to watch hot air balloons and free-fall exhibitions. The airborne Chinook, overloaded with skydivers, reported trouble and was descending back to the airfield when the tail rotor detached. It crashed on a nearby highway.

A Chinook&#8217;s front and rear rotor blades are synchronized to rotate together, without the blades hitting. Investigators later determined that parts on the front rotor failed, causing a desynchronization of the two rotors, according to a report published on the Internet. The rear rotor and its support structure were torn from the helicopter, causing it to fall, the report said.

Witnesses recalled seeing a large burst of flames and a mushroom-shaped cloud. All of the crew and parachutists died upon impact, the report said. One parachutist, who either attempted to escape or was thrown free, fell to his death.

From a cottage in North Wales, Peter Kibble-White learned from a television news report of the air disaster that killed his 29-year-old son, Paul.

After the crash, the World War II veteran took up skydiving to finish the jump his son and his comrades never completed, he said. And every year since, Kibble-White marks the anniversary of his son&#8217;s death in Mannheim, along with families of other victims whom he has grown close to over the years, he said.

One friend, Paul Lopez, a parachutist who served in Vietnam during France&#8217;s campaigns in the early 1950s, carried an album of rare photos of the jumpers boarding the ill-fated flight. Among the 24 skydivers from Toulon, France, were his 19-year-old daughter, Marie-Paule, and 18-year-old son, Francis.

The helicopter descended through a cloud, Lopez recalled, making a loud clanking noise. In a split second, it crashed to the ground, the elderly Lopez said, his eyes glazing over as he remembered dashing across the airfield toward the explosion, knowing his children did not escape.

During the brief ceremony Thursday, U.S. Army Chaplain (Maj.) Brent Causey led the group in prayer. Voices of German teens from a local high school singing hymns in German and English were overpowered by the chopping rotor blades of a helicopter launching from the nearby airfield.