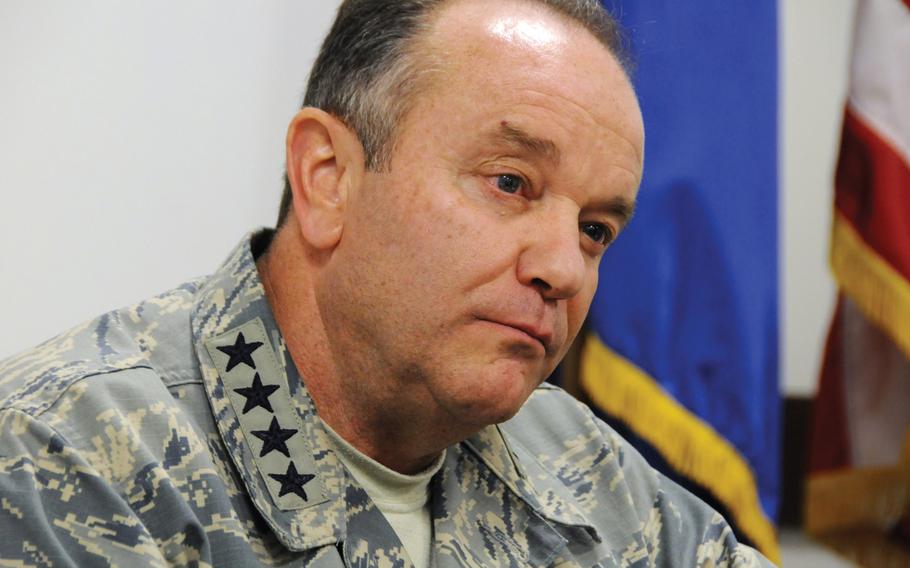 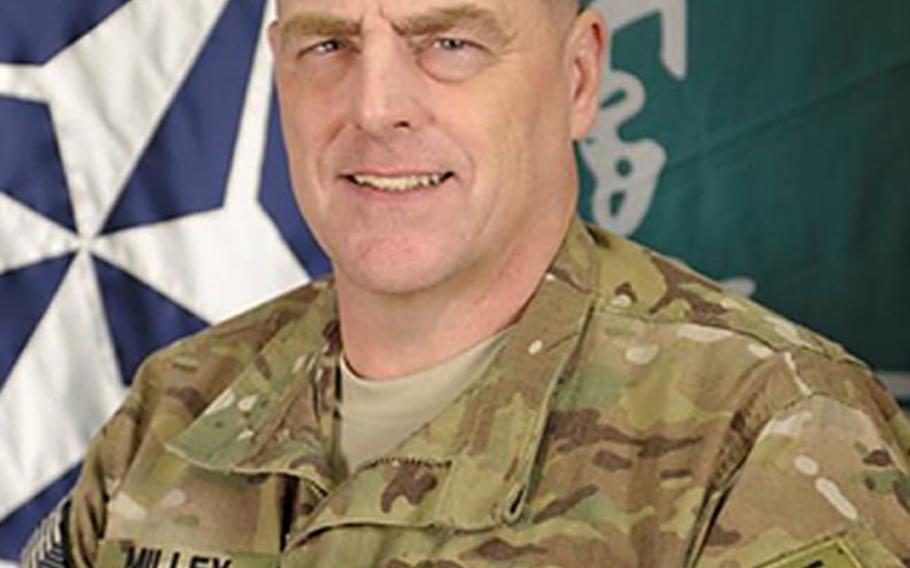 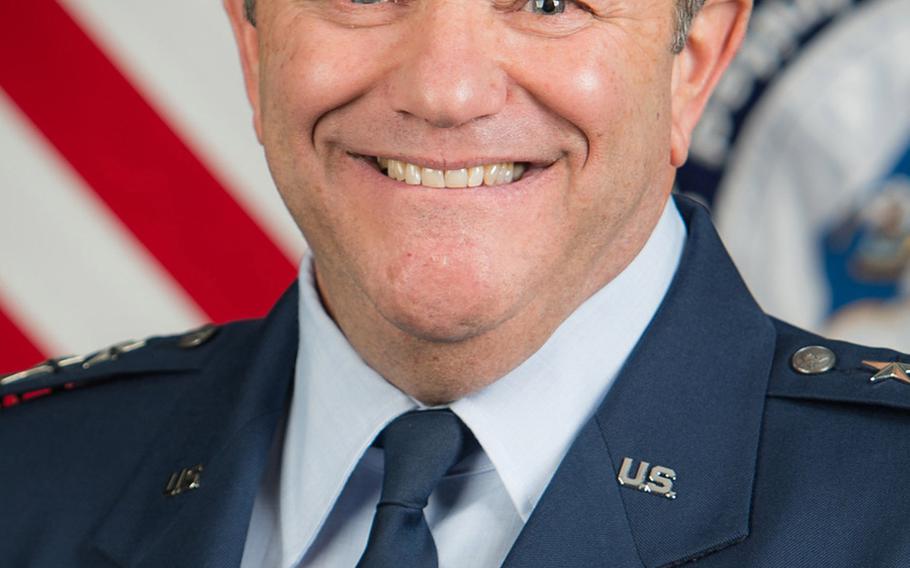 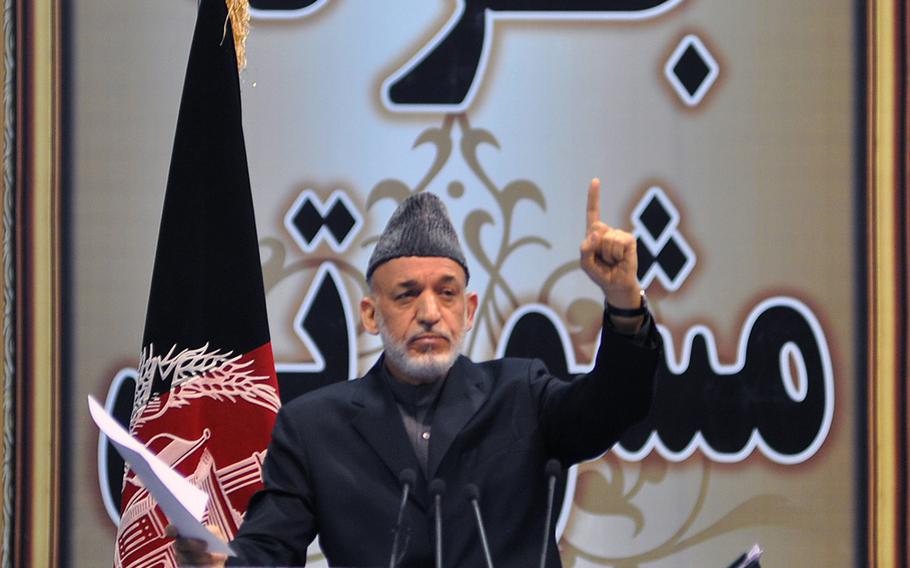 Afghan President Hamid Karzai addressed the Loya Jirga, a gathering of Afghan leaders, on Nov. 24, 2013, when the group endorsed a proposed security agreement with the U.S. to keep a military training and assistance force in Afghanistan past the end of 2014. Karzai has refused to sign the agreement, straining relations with the U.S. (Heath Druzin/Stars and Stripes)

NATO defense chiefs on Thursday said they expect alliance troops to switch to a post-2014 advise-and-assist mission as early as this summer even as U.S. and Afghan officials remain at loggerheads over a bilateral security agreement needed to ensure NATO’s long-term presence in the country.

“We hope to be completely into the mission of train, advise and assist by mid-2014 and hope to be very near whatever we anticipate our size is for the next mission by October 2014,” said Gen. Philip Breedlove, NATO supreme allied commander Europe.

In recent days, reports have indicated that U.S. commanders are recommending a post-2014 troop presence of either 10,000 troops or none at all.

Failure to resolve a dispute between the United States and Afghan President Hamid Karzai over a bilateral security agreement for troops operating in the country after 2014 could jeopardize plans for a continued U.S. presence and NATO’s follow-on training mission in Afghanistan.

Karzai has flouted demands by the U.S. and even some of his close aides to sign the agreement quickly so that plans can be made for establishing a follow-on mission. U.S. officials have suggested they could withdraw completely by the end of the year, if the agreement is not signed soon.

The Wall Street Journal reported Thursday that Western diplomats in Kabul have largely given up hope Karzai will sign the BSA, particularly given his reaction to a Taliban-claimed attack last week on a Lebanese restaurant popular with foreigners in which 21 people were killed, 13 of them foreigners. Karzai extended some pro forma condolences, then launched into criticism of a recent NATO airstrike that killed Afghan civilians.

The Journal quoted some Western diplomats as saying a NATO Status of Forces Agreement currently being negotiated could be easier for Karzai to sign. That agreement, which would lay out the terms of any mission that would succeed the International Security Assistance Force when it ends this year, could then cover the U.S. as a member of NATO, the Journal quoted diplomats as saying.

But NATO officials have emphasized that the U.S.-Afghan pact is key to a NATO agreement.

NATO defense chiefs, who were in Brussels for two days of talks on a range of security matters facing the alliance, said it would be helpful to have a bilateral security agreement in place “sooner rather than later.” But officials stopped short of issuing deadlines.

“The sooner we have a BSA, the better off we will be,” Breedlove said during a news conference. “But we will remain flexible and be able to adapt to the timing and the agreement when we get it.”

In the months ahead, NATO will be steadily drawing down in Afghanistan. The U.S. could feasibly stay in-country on the same legal basis it used to invade in 2001, a mandate from the U.N. Security Council, said Michael Keating, a former deputy envoy to Afghanistan for the United Nations and now an analyst at the think tank Chatham House .

The mandate was most recently renewed in October to extend ISAF through the end of 2014.

However, without a BSA, Keating said, the U.S. presence would remain at the whim of whatever Afghan government succeeds Karzai in April.

“Politically, I think there’s still scope for flexibility,” Keating said. “The problem is, logistically, whether that’s a good enough basis to plan.”

“Politically, I think it is possible to still plan on the U.S. and its partners having a military presence,” he said.

Kamran Bokhari, vice president for the Middle East and South Asia department at the geopolitical intelligence firm STRATFOR , said that if Karzai doesn’t sign the BSA, it’s almost certain his successor will, and some candidates have already voiced support for the agreement.

And, if Karzai begins to fear the U.S. will simply walk away, he’ll probably cave, fearing for his place in Afghan history, Bokhari said.

Added Keating: “Most Afghans — obviously the Taliban not included — but most Afghans I think would prefer for the U.S. and its partners to maintain some kind of minimum military capacity.”

During a press briefing on Thursday, Lt. Gen. Mark A. Milley, ISAF joint commander, talked up the Afghan National Security Forces, saying that they were overwhelmingly successful during the summer fighting season and that the Taliban were sure to fail in any quest to regain political power.

“(It is) widely recognized that they can only destroy,” Milley said. “They can kill, they can intimidate they can blow up a Lebanese restaurant,” but they have proven unable to build institutions, he said.

In Kabul, which leans heavily away from Taliban support, many agree, but with a note of fear rather than optimism.

“I think the United States forces should be in Afghanistan,” said an economics student at Kabul University, Mukhtar Ekhtiar. “I want (Karzai) to sign (the BSA). With them, we will promote and develop in our country more than alone. Without, we will start a new civil war in our country.”