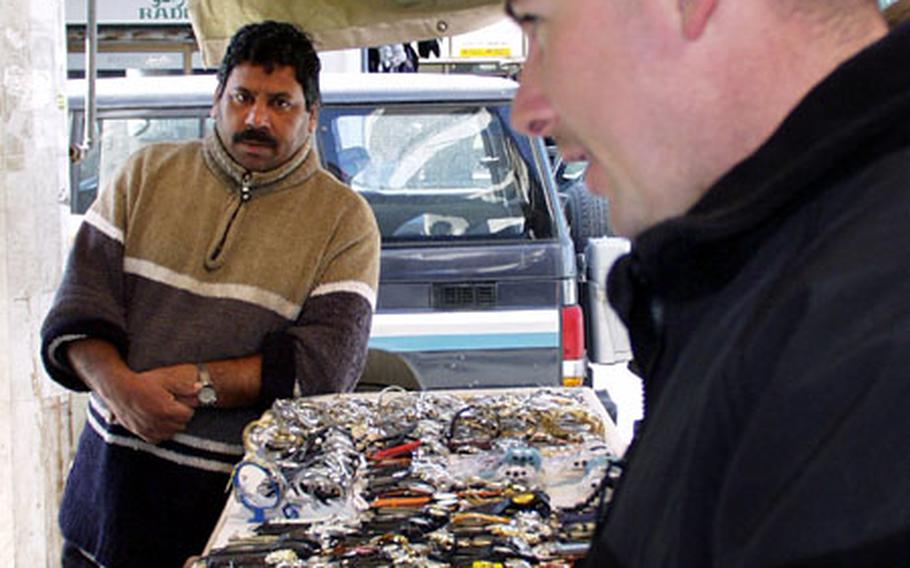 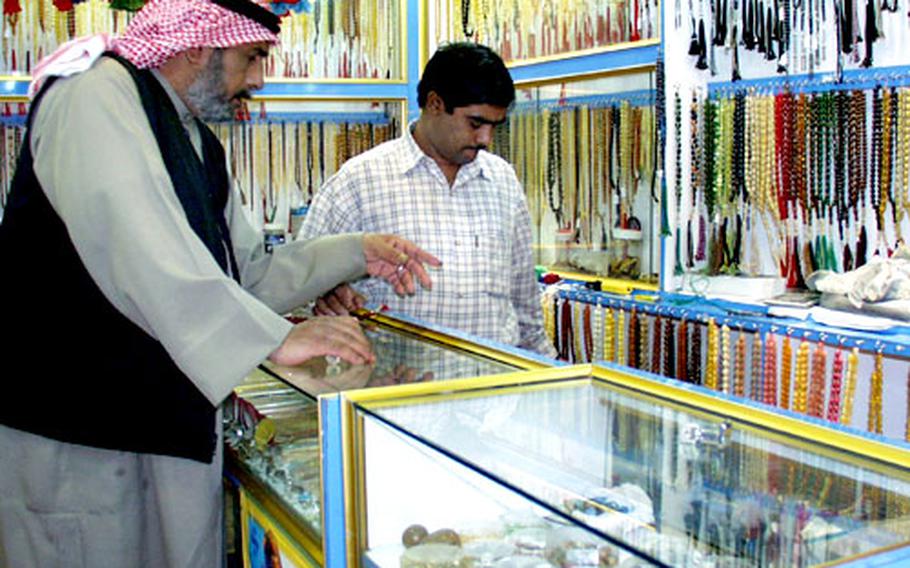 A Kuwaiti man shops for prayer beads in a store in Kuwait City&#39;s souk in the city center. (Marni McEntee / S&S) 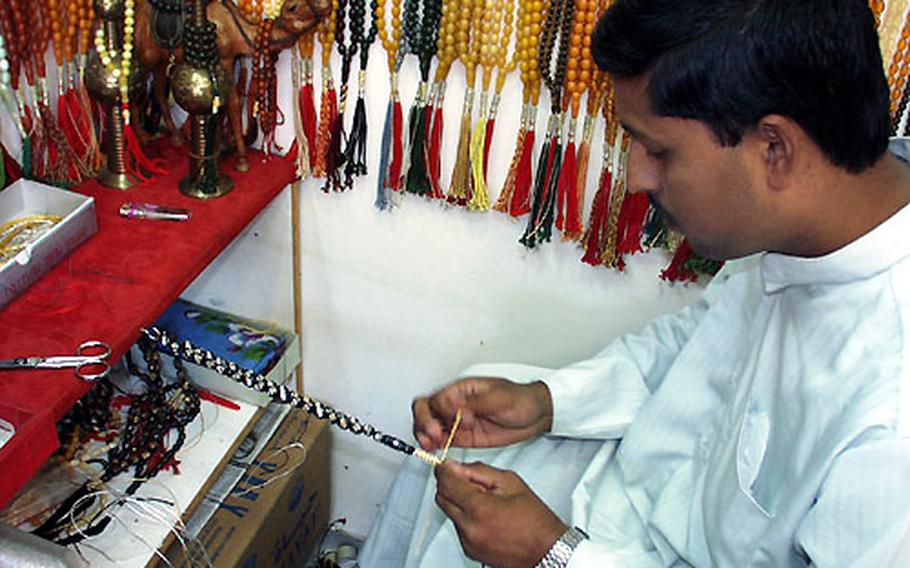 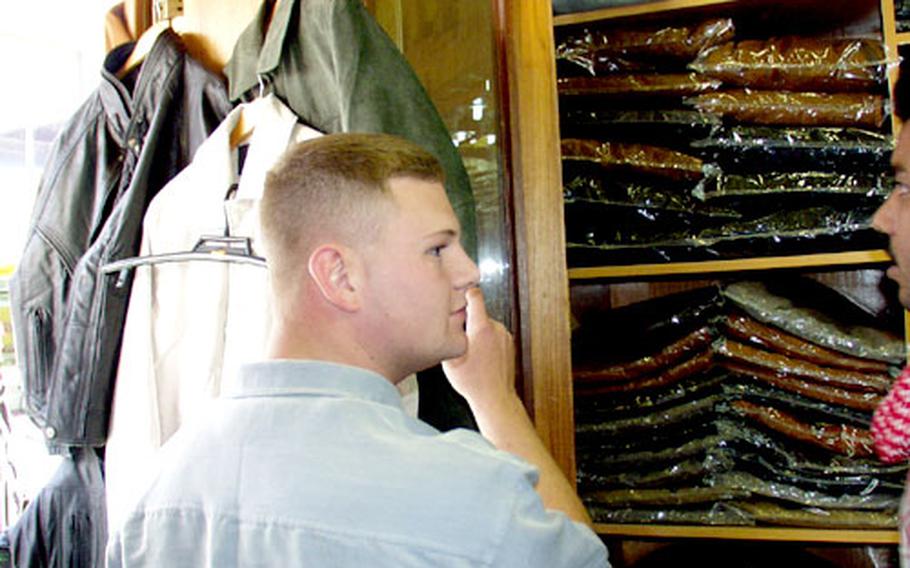 KUWAIT CITY, Kuwait &#8212; When two Kuwaiti gunmen attacked U.S. Marines, killing one, during training exercises on an island off Kuwait City&#8217;s coast in early October, military officials took a hard look at security in the region.

Within two weeks of the attack and amid a buildup of U.S. forces, the military decided to &#8220;lock down&#8221; its bases in the country. Some 10,000 U.S. troops at the Army&#8217;s main stronghold at Camp Doha, at Ali Al Salem and Ahmed Al Jaber air bases, and at remote desert camps, saw a flood of Morale, Welfare, and Recreation trips into Kuwait City dwindle to a trickle.

&#8220;Normally, if we weren&#8217;t locked down, we would have three shopping buses a day going downtown. We had nearly 50 people a day going out in town, one trip in the morning and two in the evening,&#8221; said Clayton Bovey, MWR manager at Camp Doha.

MWR-sponsored weekend trips outside of Kuwait, such as Dubai and Bahrain, have been canceled completely, Bovey said. Watercraft programs that allow troops free use of jet skis, a fishing boat and scuba gear also have been nixed for the time being, as have all-day orientation tours downtown.

The changes were made after two Kuwaitis attacked Marines from the 11th Marine Expeditionary Unit during a training exercise on Faylakah, an island 10 miles east of Kuwait City. Lance Cpl. Antonio Sledd was fatally shot and Lance Cpl. George Simpson was wounded in the Oct. 8 attack before Marines opened fire and killed the two Kuwaiti gunmen. Authorities later said the pair were linked to a group planning more attacks on U.S. interests in Kuwait, a close ally of the United States since U.S. troops helped liberate Kuwait in the 1991 war against Iraq.

The violence on Faylakah was followed in November with another attack on U.S. troops. On Nov. 21, a Kuwaiti police officer wounded two soldiers driving outside Kuwait City. Master Sgt. Larry Thomas was shot in the chest and Sgt. Charles Ellis was shot in the face. The two soldiers, from the 336th Finance Command in Lake Charles, La., returned to the United States after being treated at the Army hospital in Landstuhl, Germany.

Authorities later disclosed that the Kuwaiti police officer was mentally ill and had been a patient at a local psychiatric hospital.

Since then, troops traveling in Kuwait are subject to special measures to ensure their safety. Army officials declined to go into detail.

The additional measures mean that most of the recent arrivals from the Army&#8217;s 3rd Infantry Division, who came in November, have had a smidgen of the freedoms their predecessors had.

That may be changing. In recent weeks, leaders decided to offer troops trips downtown on a limited basis. Based on recommendations by unit commanders, some troops are able to go on low-key, MWR tours into the city for a few hours of shopping, museum trips and lunch.

To maintain security, the trips are scheduled at irregular intervals and go to different destinations each time, Bovey said.

Among those on a recent trip was Marine Cpl. David Atencio, who spent some time in Kuwait City&#8217;s souk, or bazaar, in the city center.

&#8220;When the commander said the trip was available I jumped at the chance,&#8221; said Atencio, part of the 1st Marine Expeditionary Force from Camp Pendleton, Calif.

Atencio and a half-dozen other Marines who are quartered at Commando Camp, a bare-bones base north of Kuwait City, wandered from booth to booth, checking out leather jackets, music CDs and electronics.

Bovey said that, in addition to reviving the trips, MWR has &#8220;beefed up&#8221; programs on base to help servicemembers while away their free time.

In addition to a 42,000-square-foot fitness center, soldiers at Camp Doha can use a Kuwaiti-built recreation center called the Marble Palace. The facility has a pool, driving range, batting cages, table games and four sand-pit volleyball courts, among other things. The MWR also will offer free Arabic language classes starting in January and has free video checkout and other recreation centers.

It also has started a high-security series of bazaars featuring locally produced goods.