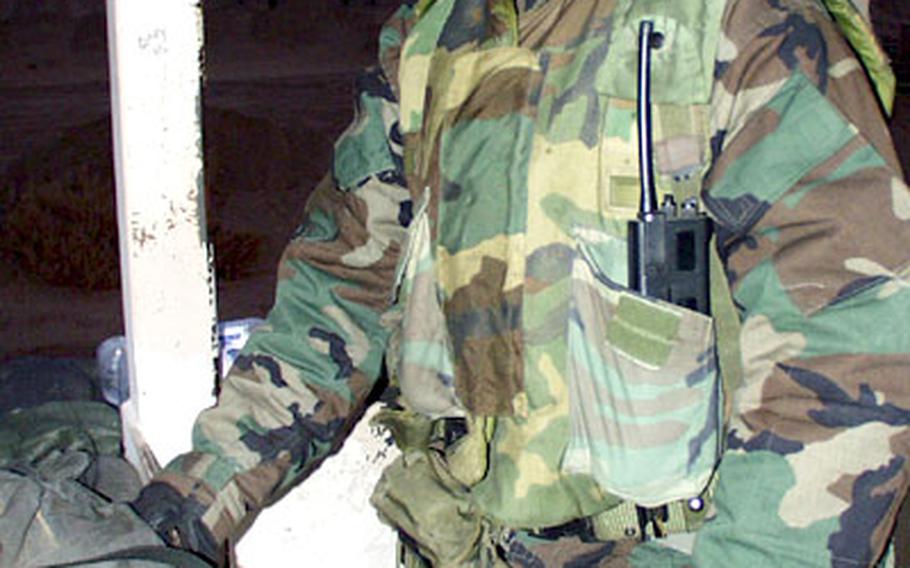 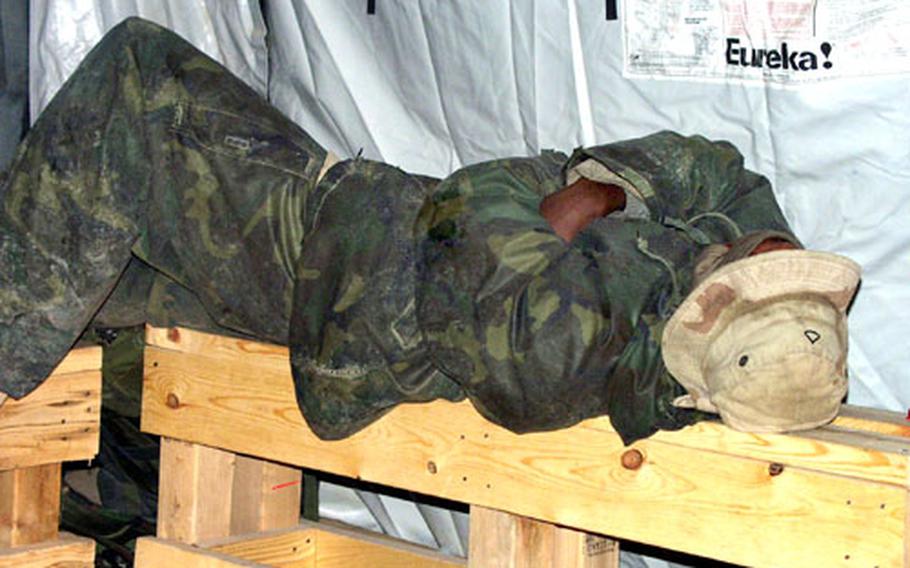 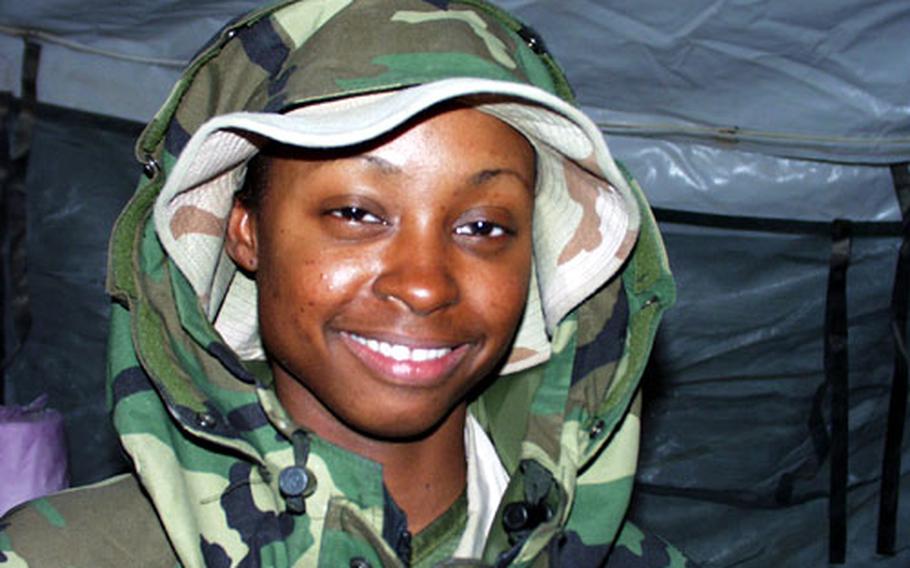 CAMP VIRGINIA, Kuwait &#8212; When the clock struck midnight on New Year&#8217;s Eve, Army Pfc. Angela Jenkins was engaged in anything but revelry on that frigid, black night in northern Kuwait.

Jenkins held tight to her M-16 weapon, staving off shivers as a biting wind made the 37-degree Fahrenheit temperature seem colder in the tower where she stood guarding a corner of Camp Virginia, home to hundreds of U.S. troops.

To her left below, the dun-colored sands shifted with the winds. The only movement was the tremble of some scraggly, foot-high shrubs. To her right, a series of 10-foot-high sand berms stood at odd angles to prevent the enemy from making his way into the &#8220;kabal,&#8221; one of a half-dozen camps where soldiers help guard Kuwait against potential Iraqi incursions. Several camps are named for states affected by the Sept. 11, 2001, terrorist attacks; Camp Virginia is a reminder of the 184 people killed when a plane smashed into the Pentagon.

While many teenagers around the world were likely trying to absorb as much alcohol as possible when 2003 made its appearance Wednesday morning, Jenkins, who turns 20 on Friday, had the sober job of scanning the horizon with her night-vision goggles, looking for anything that could pose a threat.

There were no fireworks lighting up the sky here. Jenkins, of Company B, 26th Forward Support Battalion &#8212; part of the 3rd Infantry Division from Fort Stewart, Ga. &#8212; wore several layers of clothes underneath her desert camouflage uniform. Underneath her helmet, a ski mask opened to show only her eyes, nose and mouth.

While the Army organized some celebrations &#8212; complete with near-beer and sparkling grape juice &#8212; at Morale, Welfare and Recreation tents in several camps, plenty of grunts were toughing it out at work on Tuesday night.

Many of her comrades would be too tired to stay up until midnight, or have to spend the time sleeping because they had to rise before dawn.

On another corner of the sprawling kabal, a half-dozen soldiers from the 267th Quartermaster Company were working double-time on a carefully planned fuel farm that will deliver gas from a Kuwaiti pipeline to military tanks, trucks and personnel carriers.

The farm must be finished before an additional 15,000 3rd ID troops, who received deployment orders Tuesday, arrive in Kuwait in the coming weeks.

Dressed in special suits impervious to the potentially hazardous liquid, the troops laid gas lines as the clock turned 11 p.m. They had been on shift since 8 a.m.

Inside an austere tent furnished only with wooden benches made from two-by-fours, soldiers from Turner&#8217;s unit huddled during a brief break. Pfc. Latrell McCollins, 19, of Memphis, Tenn., stretched out on one of the benches to catch an Army nap.

To keep from getting sleepy on her four-hour guard shift, Jenkins said she sings gospel songs to herself and does a lot of thinking. Sometimes, the tiny kangaroo rats that skitter across the sands seem to make the desert move. With little to look at, any little noise can whisper &#8220;danger&#8221; in the rustling wind. But Jenkins said she wasn&#8217;t afraid.

By 6 a.m. on New Year&#8217;s Day, the sun was just beginning to eclipse the tangerine orange, pencil-thin crescent moon hanging in the sky. The cold wind had picked up and Staff Sgt. Kenneth Ballard, 37, of Roseburg, Ore., sergeant of the guard, was making his rounds in a barely heated Humvee. He visited all the watchtowers and guard posts on Camp Virginia several times during his 12-hour shift.

He brought batteries for the night-vision goggles, hot beverages &#8212; &#8220;to keep them warm, inside,&#8221; and a reminder that the troops standing alone against an unseen enemy were not alone.

Pfc. Jorge Betancur, 19, of New York City, smiles broadly when he recalls the drink he tipped in the darkest part of New Year&#8217;s morning.