In Kuwait, a course on lifesaving 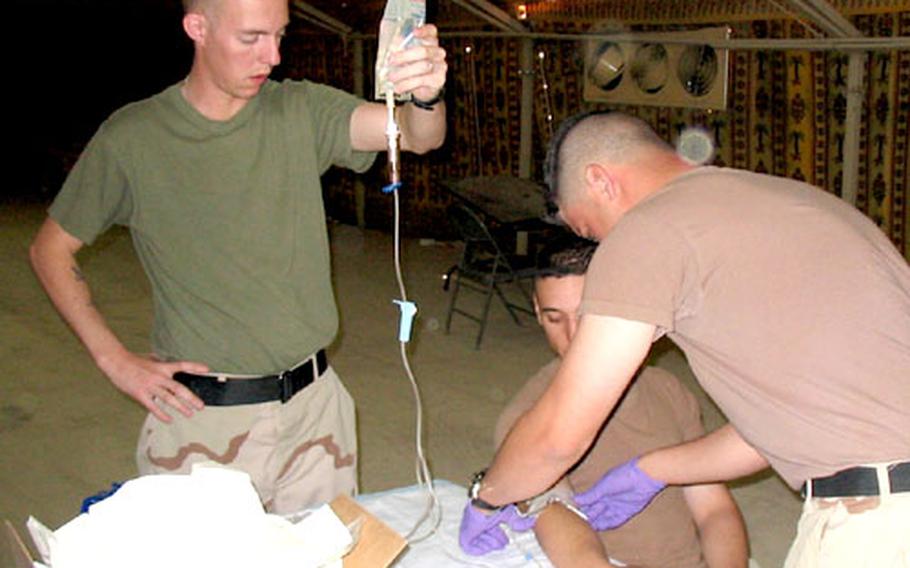 Petty Officer 2nd Class Jason Williams, left, a corpsman with 2nd Medical Battalion&#39;s Company A, holds an intravenous bag while a Combat Lifesaver student tapes down the IV on a fellow student&#39;s arm during a recent class at Camp Virginia, Kuwait. (Courtesy of U.S. Navy)

Petty Officer 2nd Class Jason Williams, left, a corpsman with 2nd Medical Battalion&#39;s Company A, holds an intravenous bag while a Combat Lifesaver student tapes down the IV on a fellow student&#39;s arm during a recent class at Camp Virginia, Kuwait. (Courtesy of U.S. Navy) 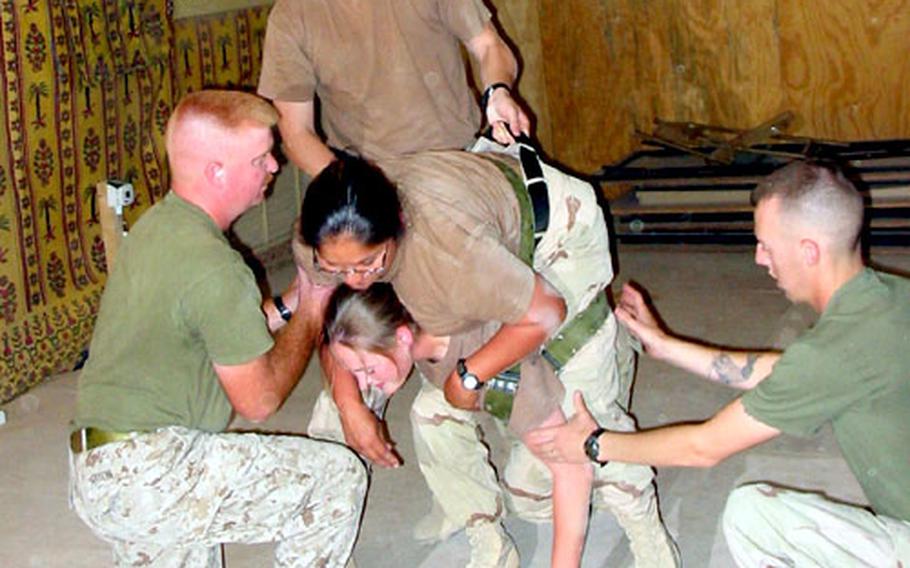 Petty Officers 2nd Class Terry Sitton, left, and Jason Williams, right, teach Combat Lifesaver students how to carry someone injured in combat during a recent class at Camp Virginia, Kuwait. Both Sitton and Williams are corpsmen assigned to the 2nd Medical Battalion&#39;s Company A. (Courtesy of U.S. Navy)

CAMP VIRGINIA, Kuwait &#8212; In combat, the difference between life and death can be having someone nearby who is armed with basic lifesaving skills.

To help educate troops on how to save a life, corpsmen with 2nd Medical Battalion&#8217;s Company A at Camp Virginia have established the Combat Lifesavers course.

Petty Officers 2nd Class Jason Williams and Terry Sitton and Petty Officer 3rd Class David Shultz run two variations of the course &#8212; a one-day refresher for those who have already been certified and a five-day course for beginners. Williams and Sitton instruct the course; Shultz handles the administrative details.

Sitton said there was a serious need for the course because the Army requires at least one member of each squad in a platoon to be lifesaver-qualified. He said when members of his company were told about the need, he and Williams went through an instructor&#8217;s course at Camp Arifjan.

The new instructors returned to Camp Virginia with only a handbook and had to quickly find material to teach the class. They found an Army Web site that helped them.

Williams said they teach the course every other week, instructing anywhere from 10 to 30 students.

Each morning the students receive lectures, followed in the afternoon by hands-on training, Sitton said.

Throughout the five days, students get classes in everything from basic first aid and anatomy to preventive medicine and how to apply splints and tourniquets. Nuclear, biological and chemical agents also give training on how to treat wounds.

The final day involves role-playing, with some of the students being patients and others being the lifesavers. Instructors and fellow students critique the students&#8217; work, Sitton said.

While the casualty drill may be the culminating exercise, Williams said, each student must also pass a written exam and then participate in the most nerve-wracking part of the course for many of them &#8212; sticking a fellow student with an intravenous drip.

Williams said the course is open to all services, although Marines don&#8217;t take it because they have a corpsman with units. He added that soldiers who complete the course earn points toward promotion. They also receive a certificate, along with a lifesaver bag full of medical supplies.

Sitton said he thinks the course is critical for members of many units.