In Kosovo, holiday decorations are a post-Christmas thing 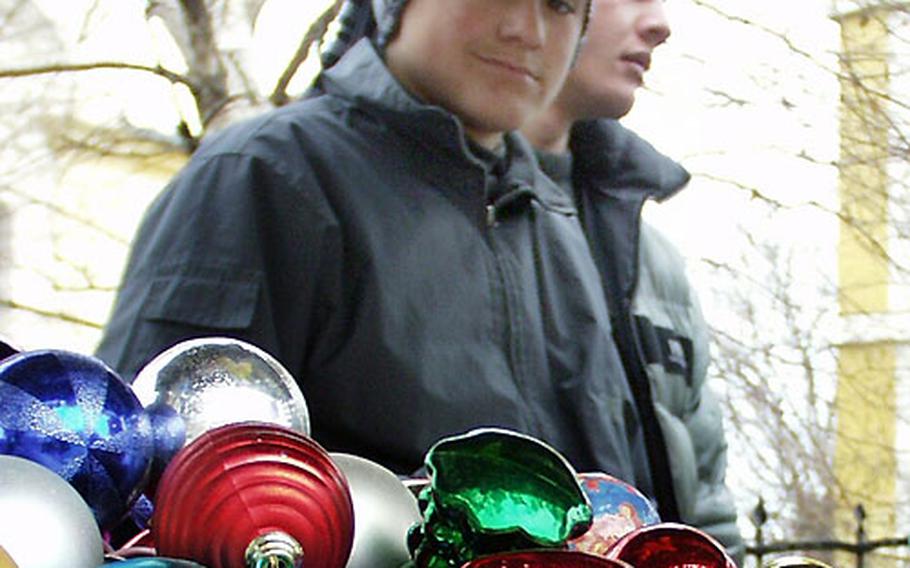 Riza Gashi, left, and his cousin Aarian Gashi sell balls that are used to decorate trees Kosovars put up on New Year’s Eve. The trees are part of the country’s holiday celebration, but aren’t Christmas trees. (David Josar / S&S)

Riza Gashi, left, and his cousin Aarian Gashi sell balls that are used to decorate trees Kosovars put up on New Year’s Eve. The trees are part of the country’s holiday celebration, but aren’t Christmas trees. (David Josar / S&S) 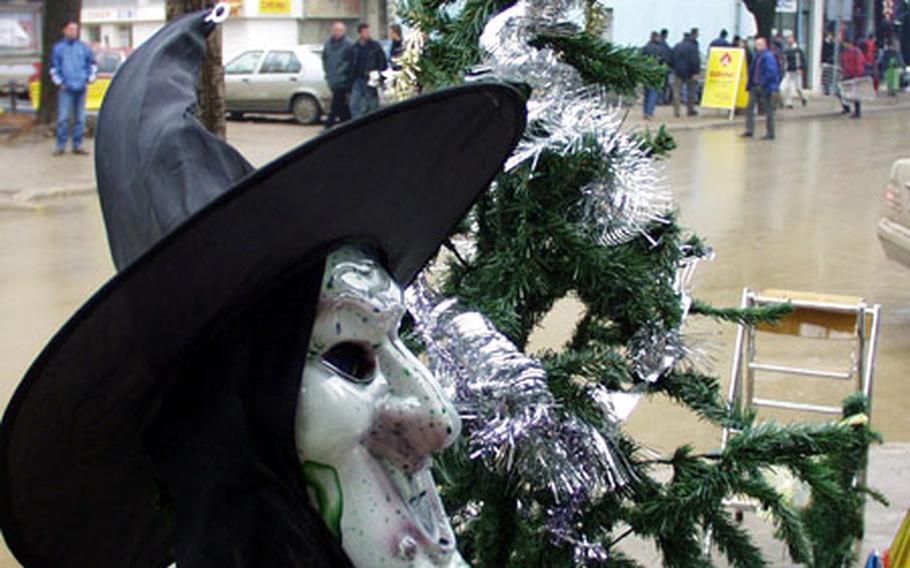 The tree decorations in Kosovo are different than in America. Here, two trees being sold for a New Year’s Eve celebration sport a Santa’s hat and a witch’s mask. (David Josar / S&S)

The holiday frenzy begins after Dec. 25 as merchants erected small stands along the sidewalks and streets. Kosovars put up &#8220;Christmas trees,&#8221; garland, tinsel, colored balls and even tiny, plastic Santa Clauses religiously &#8212; only they are for New Year&#8217;s Eve celebrations.

Traditions, said 45-year-old Hakim Shari, are a part of Kosovo, although they may seem odd to outsiders.

On Tuesday, most businesses closed early or simply did not open.

Shari said he and his family began their three-day celebration on Tuesday by eating together, and then stay up late talking, drinking and playing games until midnight.

They set off some small firecrackers and bottle rockets at midnight. Wednesday and Thursday were to be spent visiting family and friends.

Although Shari said his family planned to mark the New Year at midnight with fireworks, that is not the Kosovo tradition.

The tradition is ironic. Historically, guns were as common as bread in a Kosovar home, but are now illegal, and KFOR troops routinely search for and seize weapons &#8212; and then destroy them.

Gashi was right about one thing: New Year&#8217;s did start with a bang as gunfire could be heard all around town Wednesday morning for at least a hour.

But the tradition can be trouble for residents and Kosovo hospitals. Dr. Tschur Kourp, who works at the main Urosovec hospital, said last year he treated two people who were hit by bullets. &#8220;What goes up must come down,&#8221; he said.

He predicted more of the same for this year, and said his small hospital would probably see at least one person hit by a stray bullet.

While Kosovars have adopted some of the traditions of Christmas, there are definite differences.

While most Americans go for a symmetrical look to their Christmas trees, Kosovar decorating is haphazard and in some ways mysterious.

Many Kosovars inflate balloons that they tape to their trees despite the fact the balloons regularly burst.

And traditional cut evergreens are rarely seen because it is illegal to cut them down and there are no tree farms or truckers who will bring cut trees in from other countries.