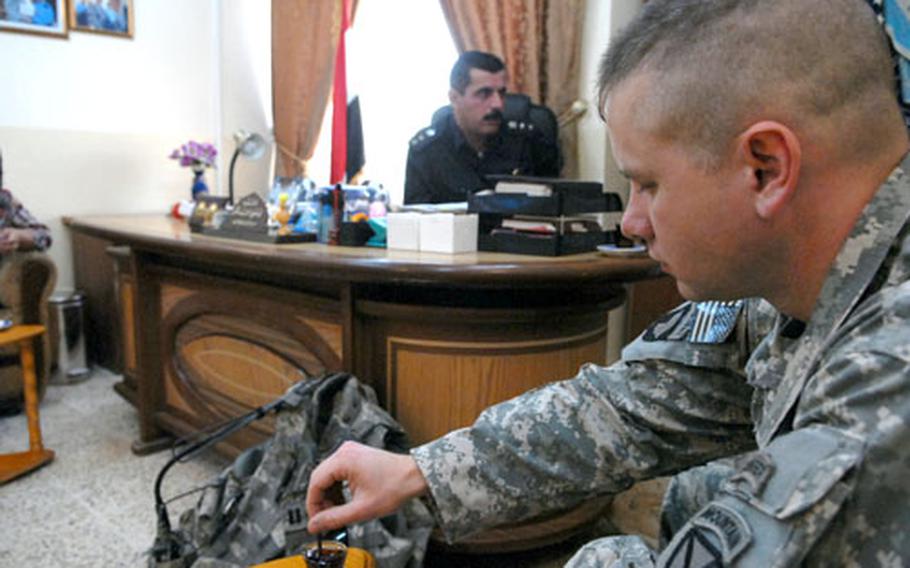 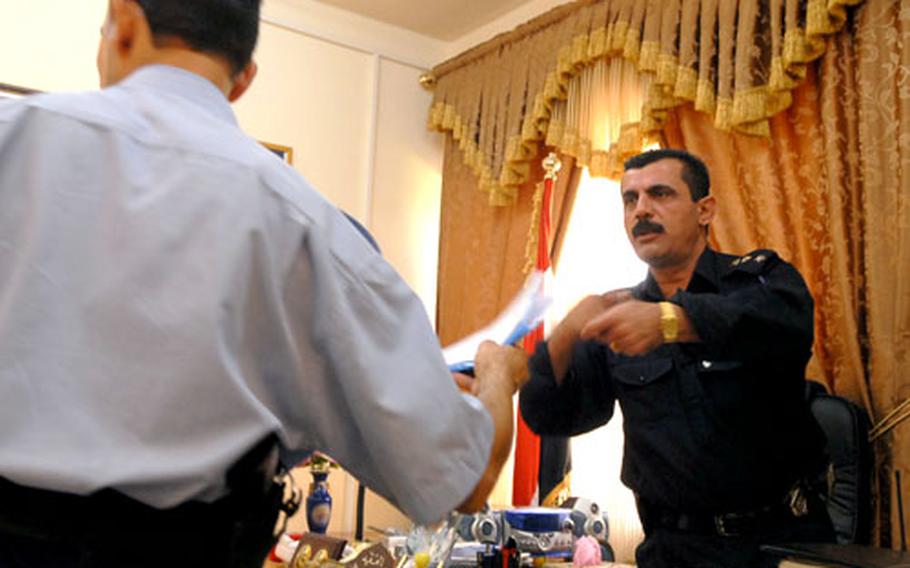 Police Col. Bestoon Mohammad Qadir takes some paperwork Monday during a busy day at his office in Kirkuk’s Azadi district. Police have been kept busy with exclusive control over the city’s security. (James Warden / S&S) 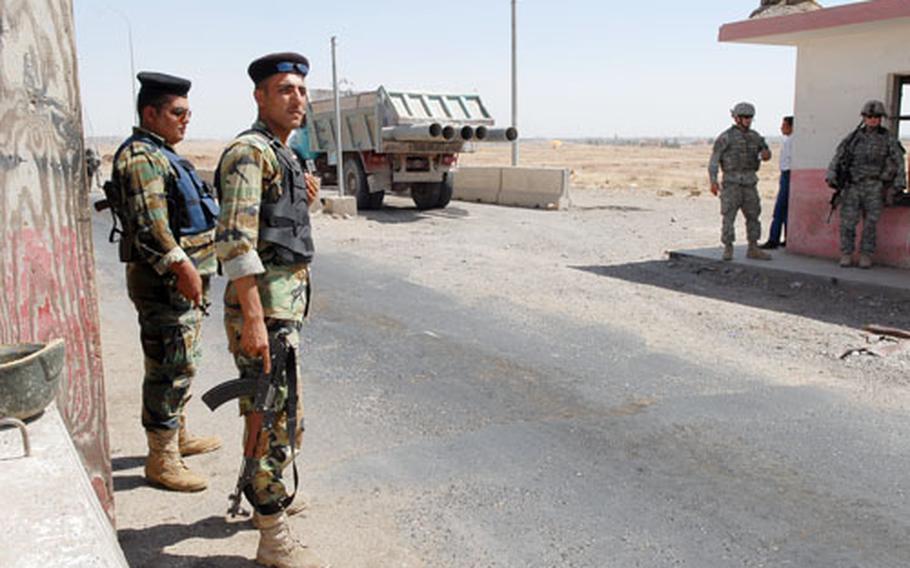 Men with Kirkuk’s Emergency Services Unit, a SWAT-like part of the police force, guard a checkpoint Monday in the northern part of the city. (James Warden / S&S)

KIRKUK, Iraq &#8212; Police Col. Bestoon Mohammad Qadir isn&#8217;t the typical Iraqi police chief. He&#8217;s nicknamed "Crazy Bestoon" for the way he cuts up and jokes with everyone around him, in contrast to the more staid chiefs in Kirkuk&#8217;s other districts.

The moniker might as well apply to Qadir&#8217;s office, though. People constantly wandered in and out of there last Monday. A woman asked for help getting an after-school program started. One of Qadir&#8217;s officers requested leave so he could get married. Department heads handed him paper after paper to sign.

The workload should come as no surprise, though. Leaders in other parts of Iraq are anticipating the day when they can push the Iraqi army into the rural areas and turn over control of the cities entirely to police. But Kirkuk, alone, is already seeing that future, and the results here offer a glimpse at the environment that could spread across Iraq as the country becomes more stable.

Police took exclusive control of Kirkuk&#8217;s security about 15 months ago, said Col. Dave Paschal, commander of 1st Brigade, 10th Mountain Division, the brigade responsible for the city. So far as Paschal knows, Kirkuk is still the only major city where police don&#8217;t share security duties with the Iraqi army or other military forces.

The separation in responsibilities creates a situation closer to a peacetime environment. Police take on their traditional role of preventing violations of law &#8212; "the same thing we do in America, really," said Capt. Doug Serie, commander of Headquarters and Headquarters Company, 2nd Battalion, 22nd Infantry Regiment, which works closely with police in the city.

Meanwhile, the division of labor frees up the Iraqi army to pursue insurgents in the country&#8217;s rural areas, Serie said.

The two forces do partner occasionally, and the Iraqi army does very rarely perform its own missions in the city. Paschal said those occasions have created the few conflicts there have been between the police and the army.

Even in those situations, the police were mostly just upset that they didn&#8217;t know about an operation beforehand, he said.

Said Qadir: "We have a very good relationship with them, but we are separate. They have their own job. We have our own job."

To his credit, Qadir was quick to note the Iraqi army&#8217;s strengths: "They are better than us at taking control because they are the army."

Police here also have responsibilities that those in many other cities don&#8217;t have. Kirkuk doesn&#8217;t have a mayor or city council, said Capt. Raphael Cohen, 2/22&#8217;s intelligence officer. Its districts do have government officials called muktars, but their power is relatively weak. So police chiefs have become the de facto local government officials, part of the reason why Qadir&#8217;s office was buzzing Monday morning.

Kirkuk, though, is at a stage that many Iraqi cities still haven&#8217;t reached. When the brigade came to Iraq 10 months ago, it assigned responsibility for the million-person city to a single company. But the situation quieted down to such an extent that a lone platoon now has that job, even at a time when Iraqi police here are under strength by about 3,000 people of the 12,000 Kirkuk is allowed.

"In the north here, everything has just seemed to fall in line because they respect their government," Serie said. "The people here have embraced their security. There&#8217;s no doubt in my mind I can put on civilian clothes and walk out in sector."

By contrast, Mosul, a city about twice as large as Kirkuk, requires 14 Iraqi army battalions and a couple American battalions to augment its 10,000-person police force.

Iraqi police schooled on years of counterinsurgency missions can also become more fixated on raids and other military-type operations than comparable peacetime police forces, Serie said. He&#8217;d prefer for them to concentrate on community policing, a philosophy popular in the States in which officers focus on getting out in their neighborhoods and building relationships instead of arrest totals.

"They are the same [mind-set as the Iraqi army], but I wish they would have a different approach from each other," he said. "Everybody&#8217;s so hard-charging trying to get rid of insurgents."

Soldiers love the situation, though. In downtime, the Americans and Iraqis chat with one another using a hand gestures and a hodgepodge of broken English and Arabic.

Working exclusively with the Iraqi police has allowed many of them to get to know individual police officers, whom they greet while patrolling the city. In their minds, at least, there&#8217;s nothing crazy about Kirkuk&#8217;s current set-up.