In Japan, New Year’s is a time for reflecting and cleansing the spirit 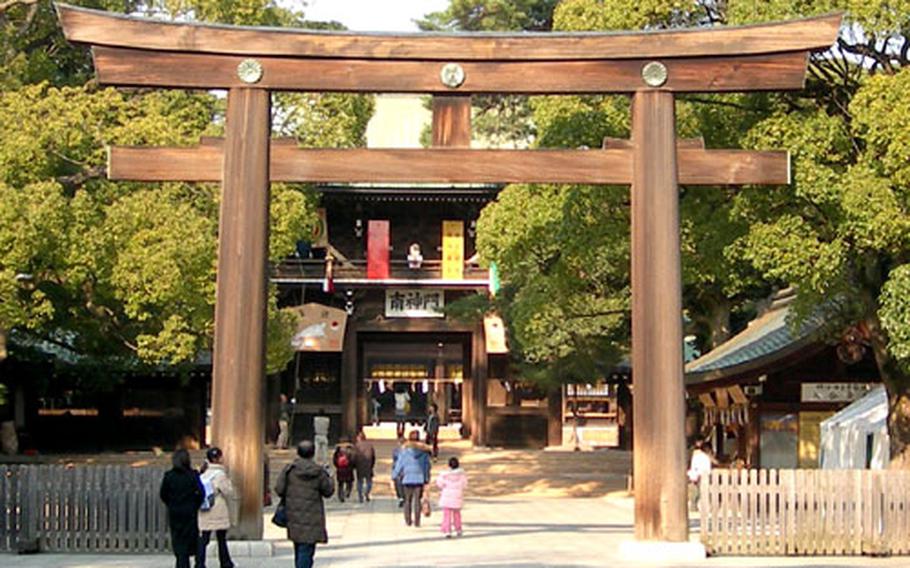 Visitors to the Meiji Shrine in Tokyo walk under the large Torii Gate near the shrine’s entrance. Japanese visit a temple on New Year’s Eve to strike a bell 108 times to wipe away all the bad things that happened of the past year and to purify one’s spirit. (Christopher B. Stoltz)

When Christmas is over, the Japanese start counting down to New Year&#8217;s, the country&#8217;s most celebrated holiday.

In a country where Shinto is the native religion, appropriately greeting a new year is of the utmost importance. Government offices close from Dec. 29 to Jan. 3 and most businesses also shut down for the new year&#8217;s first three days. But to ring in the new year properly, much preparation must take place.

Before New Year&#8217;s Eve, homes must be thoroughly cleaned &#8212; inside and out. Shinto places great emphasis on purification, and it&#8217;s believed cleanliness is essential for peace of mind and good fortune. All family members are responsible for housecleaning. If someone doesn&#8217;t participate, he or she is indebted to the rest of the family for the entire coming year.

After cleaning, the house is decorated with kadomatsu, ornaments made of pine and bamboo believed to be the spot where a god first lands to bring happiness to the home.

The front door is decorated with shimekazari, a wreath of new rice straw, ferns and a small orange. New straw cleanses the impurity of the old year and fern symbolizes longevity. The orange, called daidai, represents lasting prosperity for the family.

The family alcove is decorated with arranged flowers, a scroll for the season and a kagami mochi, made of two mochi balls decorated with fern, an orange, kelp and other products of the sea and mountains.

Cooking osechi, traditional dishes eaten to celebrate the new year, also is essential, and it&#8217;s a tradition that dates back to the 8th century. Each dish is placed in four layers of lacquered food boxes called jubako.

The top layer usually contains appetizers; the second is vinegared food; the third is baked food; and the fourth is stewed or boiled food.

The last thing done before the turn of the year is the striking of temple bells 108 times. From 11 p.m. to the stroke of midnight, the chiming of bells resonates across Japan.

Some people go to a temple to join in the bell striking, while others stay home and listen to the bells while eating noodles. Depending on the size of the temple bell, it can take one to several people to ring it. People line up for hours hoping for the chance to ring in the new year.

It is believed that each human being has 108 earthly desires, and striking the bell 108 times wipes away all the bad things that happened, wrong deeds, ill desires and bad luck of the past year and purifies one&#8217;s spirit.

On New Year&#8217;s Day, many Japanese go to a mountain, hilltop or beach to observe the year&#8217;s first sunrise. This practice comes from a Shinto belief in love of nature and worshipping natural objects, including the sun.

Before the first breakfast, the family gathers and drinks otoso, herbal sake. A typical breakfast starts with ozoni soup, with mochi as the main ingredient.

Many people then visit a shrine to make wishes for the coming year. According to the National Police Agency, out of Japan&#8217;s population of 127 million, almost 94 million visited shrines throughout the country during the 2005 New Year&#8217;s holiday.

In Japan, it&#8217;s customary to receive New Year&#8217;s greeting postcards on the first day of the year. People mail them before a set deadline to guarantee delivery on New Year&#8217;s Day.

The postcards usually are themed around the new year&#8217;s animal under the Chinese zodiac, which for 2007 is the boar. People born in the year of boar are said to be very straightforward, strong-willed and full of vitality.

During the New Year holiday, people visit their relatives, work supervisors and friends. When visiting someone&#8217;s home during the holiday, it is customary to offer otoshidama, gift money, to the children of the family visited.

New Year&#8217;s is a time for reflecting and cleansing the spirit. Whether or not the practice stems from Shinto, it is a good opportunity for everyone to make a fresh start with a clean slate.