In Iraqi town with an infamous name, a time for kindness amid the danger 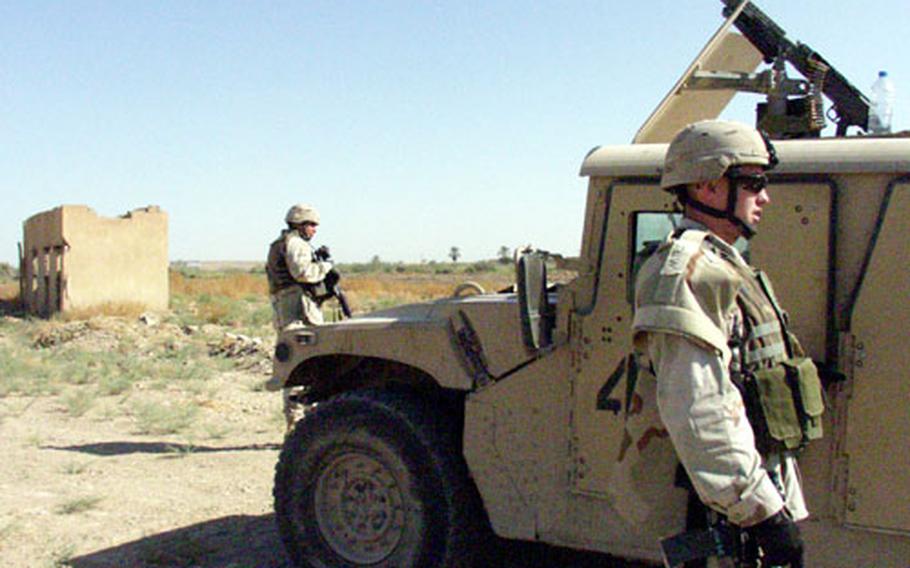 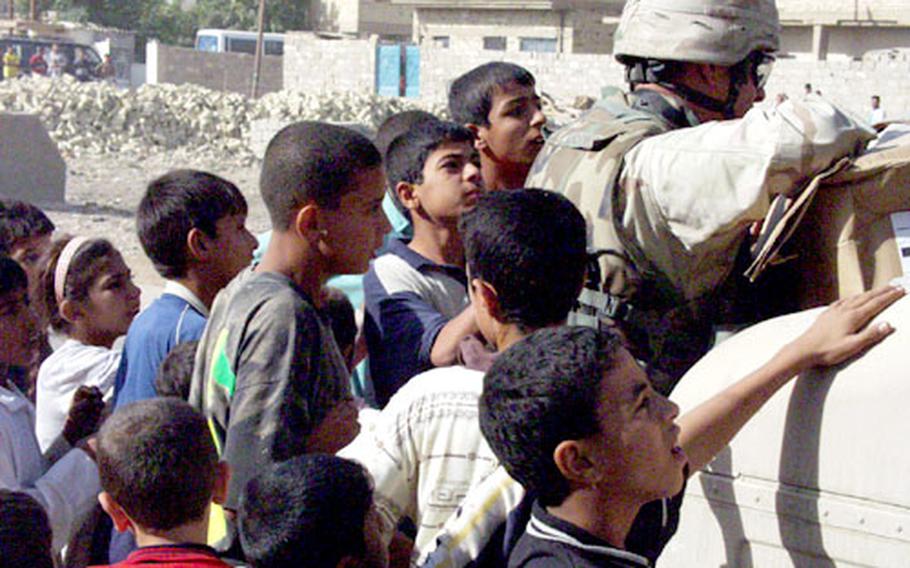 Iraqi children in the Abu Ghraib area crowd around Army Sgt. Patrick Castillo as he digs out more flip-flop sandals to give away. (Ward Sanderson / S&S) 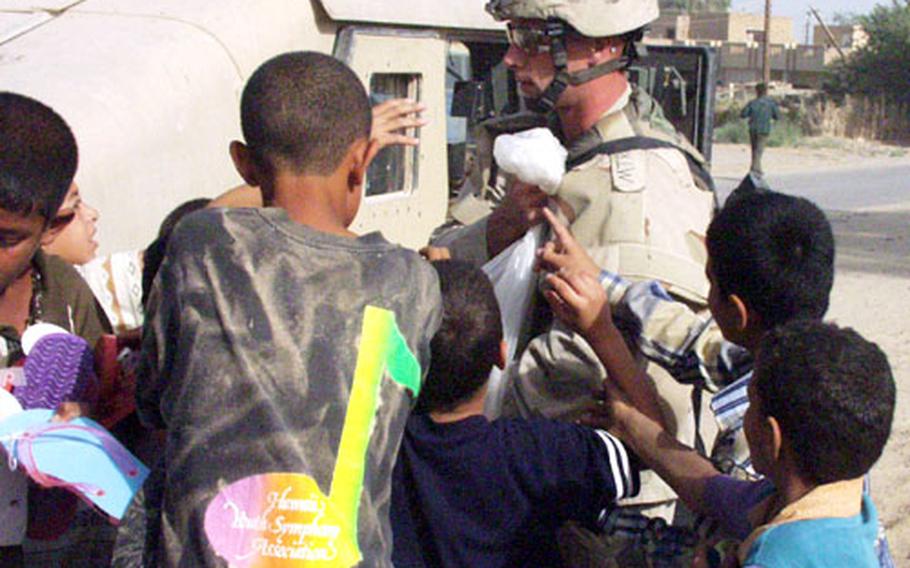 ABU GHRAIB, Iraq &#8212; The radio chirped and coughed, then came the message.

Military police killed someone in the evening because that someone tried a drive-by in this hardscrabble town that is home to the infamous prison.

The morning chatter switched topics: A vehicle had been casing the base gate. The radio told soldiers to keep an eye out.

Sgt. Patrick Castillo listened and eyed the flickering satellite map that guided his armored Humvee around sector. Castillo, the two other troops inside and another Humvee were on patrol for mortar shooters.

The insurgents set up in clearings and try to fire rockets or mortars inside U.S. camps around Baghdad International Airport. Castillo and the other &#8220;Thunderhorses&#8221; of the 1st Cavalry Division&#8217;s 2nd Battalion, 12th Cavalry Regiment, try to catch them in the act.

It can get exciting &#8212; too exciting &#8212; as when a truck bomb slammed into a municipal building last month, blowing it to hell and killing an American soldier, two Iraqis and wounding at least 13 other people. Castillo saw the mushroom cloud and felt the blast from nearly a mile away and responded with his team.

Other mornings there is nothing but idle locals and wind and sand. The soldiers hoped for quiet this morning. But they didn&#8217;t know.

The low-riding, determined bulk of the Humvee sped forward and in the distance a smoke column churned into the sky. Probably a garbage fire, Castillo guessed, or burning tires.

Soon the Humvees stopped near some hovels.

Pfc. Michael Lewis got out of the Humvee in front of Castillo&#8217;s and started handing out sandals. The 2-12 had collected about 2,500 pairs via a campaign started by their commander, Lt. Col. Tim Ryan, and a Georgia church and strangers contacted via e-mail. They called it Operation Flip-Flop.

Since the anti-mortar soldiers go outside the wire anyway, they get volunteered for these things. They were a little nervous about it, though, parked on the open road.

Soon it became a melee of arms and tugging with Lewis in the middle. He was getting mad. Lewis told them to back off, sharply at first, then checked himself.

About 50 children encircled him. Some kids soon looked like flip-flop trees. Others had none. A little girl in a red dress kept trying for a pair, but bigger boys shoved her.

In the distance there was a rumble like a mountain clearing its throat, and Staff Sgt. Joe Garcia said it was a rocket. Nobody flinched. They kept up with the flip-flops.

Lewis had given out 70 pair in about three minutes. He was out. The swarm moved to the other Humvee.

The children had Castillo pinned against his truck. A man in a white robe rose from his concrete slab and ordered the children to behave. This sort of worked for 20 seconds. Then the children were a mob again and the man threw rocks at them. He punched one big boy in the head, chasing him clear across the street.

Everyone got back inside the Humvees and pulled away.

Sheep with yellowed, matted coats plodded next to railroad tracks, trailed by a boy and girl. The boy and girl waved.

There was a dull subwoofer boom, then gunfire. But the children were safe and so was the Humvee. The noises came from far enough away.

The soldiers stopped in a clearing where rocket-shooters sometimes go.

Castillo, Yauger and Spc. Michael Sullivan surveyed the pancake of terrain. There was no one there. A train engine sped by on the tracks, hauling no cars behind.

The radio chirps, coughs, then announces that the noise had been an attack on an Army convoy, one belonging to the 10th Mountain Division-another sector altogether.

Castillo remembered the municipal center bomb, how it moved a Bradley fighting vehicle 15 feet and vaporized the guard tower. How witnesses said the suicide bomber who drove the truck waved before he set off the 1,500 pounds of explosives. How the gate was gone by the time Castillo got there. How the fire set off the Bradley&#8217;s guns and rockets like a wicked Roman candle.

Soldiers do these patrols every day, and more than once a day. Sometimes they find scenes of death. Sometimes, if the soldiers can tune out the distant booms, the mornings are slow and feel almost country lazy in the dust and sun.

That was like this morning, when the sector was all beige horizon. The only interruption was a brick triangle. One of the guys said it was a pyramid. Another said it was some religious thing.

It was a ziggurat, stair-stepped but flat against the sky like a serrated knife. But its symmetry was off, like a car missing its two right wheels. At least one of the soldiers had been there before, up close.