In Iraq’s Kurdistan, tension before the vote A poster of Massoud Barzani hangs at the main market in downtown Irbil, the capital of Iraq’s Kurdish region. Elections for the regional government are set for Saturday. (Heath Druzin / S&S)

A poster of Massoud Barzani hangs at the main market in downtown Irbil, the capital of Iraq’s Kurdish region. Elections for the regional government are set for Saturday. (Heath Druzin / S&S) 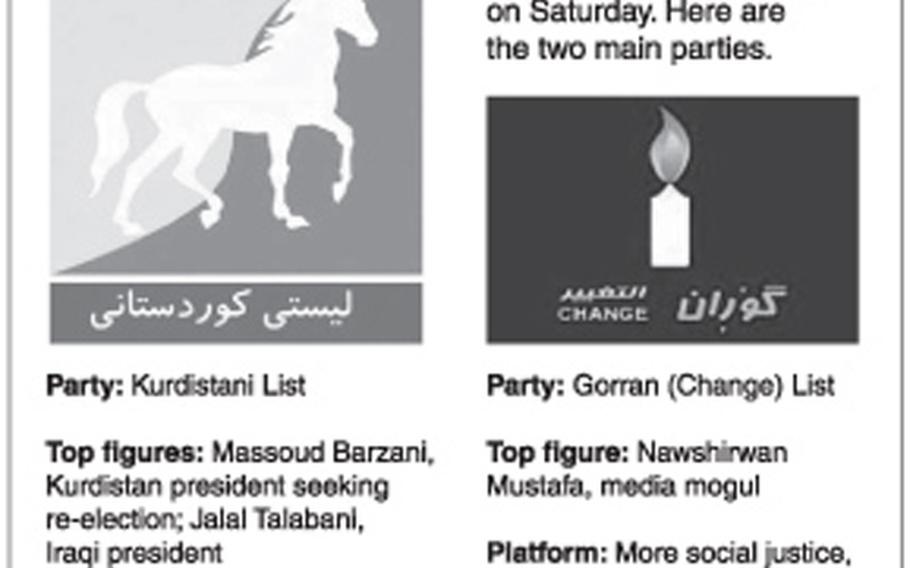 Gates meets with Kurd president with election results pendingIRBIL, Iraq - Amid a canopy of colorful campaign banners and a stream of breathless programs on party-run television channels, there&#8217;s an eerie quiet on the streets of this regional capital just days before elections in Iraq&#8217;s autonomous Kurdish region.

People are afraid to say whom they want to vote for on Saturday &#8212; "afraid of the police and security forces, of being fired from their jobs," said Dara Saeed, who was sipping tea outside a cafe.

Saeed, who is voting for the upstart Gorran (Change) List, was one of the few opposition supporters willing to go on record opposing the ruling coalition, run by two powerful families.

Many echoed Saeed&#8217;s comments, saying they are afraid of repercussions if they speak out against the Kurdistan Democratic Party (KDP) or the Patriotic Union of Kurdistan (PUK), who have united as the Kurdistani List, after years of often bloody rivalry, for the presidential and parliamentary elections.

The Change List, led by Nawshirwan Mustafa, a former PUK leader, contends that the old-guard parties are more interested in keeping power than solving problems.

The election in the three-province region known as Kurdistan comes at a time of increased tensions between the Kurdistan Regional Government and Baghdad over the still unresolved issues of land claimed by both Arabs and Kurds, including the oil-rich city of Kirkuk, and the distribution of oil wealth.

Several incidents in disputed areas over the past few months have brought Kurdish and Arab fighters to the brink of violence. In a recent Washington Post interview, Prime Minister Nechirvan Barzani said the Kurdish zone and the central government are closer to war than they have been since the American invasion in 2003.

U.S. soldiers will be on standby to respond to election day incidents and are working behind the scenes to help Kurdish forces with intelligence, but will stay off the streets as much as possible during the election, said Maj. Jim Lawson, who works with Border Transition Team 4100, a group that oversees operations throughout Kurdistan.

There is palpable excitement among voters, many of whom point to the election as a turning point in Kurdish democracy, but talk of change is often in hushed tones.

The political landscape, long dominated by the parties of military legends Massoud Barzani and Jalal Talabani, has been shaken up by a vigorous campaign by the Change List, made up largely of breakaway members of Talabani&#8217;s PUK party. Barzani has consolidated power since being elected Kurdistan&#8217;s president by parliament in 2005, while Talabani has served as president of Iraq since 2005.

The election results could dramatically affect relations with the central government. As president, Barzani has often been at odds with Baghdad, negotiating oil contracts unilaterally and ordering military operations outside the Kurdistan borders that rankled the central government. Change List leaders are calling for much closer relations with Baghdad and scaled-back operations by the Peshmerga.

"The people are fed up with the ruling political parties," he said. "They want real results on the ground, not just slogans."

Massive posters of Talabani and Barzani, who is running to retain the presidency, adorn buildings in the Kurdistani strongholds of Dohuk and Irbil, a sight that reminds some people too much of the posters of Syrian dictator Bashir Assad that are ubiquitous in Kurdistan&#8217;s decidedly undemocratic neighbor.

Corruption is rife throughout Kurdistan. Government and military officials can often be seen driving in expensive, armored luxury sport utility vehicles bought for them as their personal vehicles at government expense.

"Barzani and Talabani are great guys, they&#8217;ve been Peshmerga for a long time &#8212; that doesn&#8217;t mean they can dictate everything," said Aram Nuri, a 24-year-old college student from Irbil, who plans to vote for a minor party list.

Despite this skepticism, and growing momentum of the Change List, Barzani and Talabani retain strong support, especially from older Kurds, many of whom fought with them as part of the Peshmerga militia during the darkest days of oppression under Saddam Hussein.

There is an ugly side to the campaign, with Kurdistani supporters painting their rivals as violent rabble and Change List backers claiming dirty tricks and corruption by the ruling coalition, which controls the military and the public coffers. Both major parties say campaign posters are routinely ripped down and party workers threatened.

Some Kurds are nervous about the possibility of political rivalry spilling into violence in this quasi-nation, where the PUK and KDP fought a bloody civil war in the 1990s and elements of the Kurdish security forces operate as militias loyal to certain political parties.

While complaining about Change List tactics, Bakir Mustafa, the Kurdistani List&#8217;s Irbil campaign coordinator, reiterated a complaint about the ruling parties &#8212; that they use Kurdish security forces for political gain.

"All the police and Asayish (Kurdish intelligence service) are ours &#8212; but the Change List is still attacking us," he said.

In Sulaymaniyah, a stronghold of the Change List, there have been large-scale demonstrations and reports of fistfights between supporters of different parties. Two bystanders were injured recently when police fired over a crowd of Change List supporters demonstrating in the city.

Tempering the excitement for many people is the knowledge that even the main challenger in this election is part of the old guard. Most high-profile Change List figures are former PUK stalwarts.