In Iraq, processing of claims is a work in progress 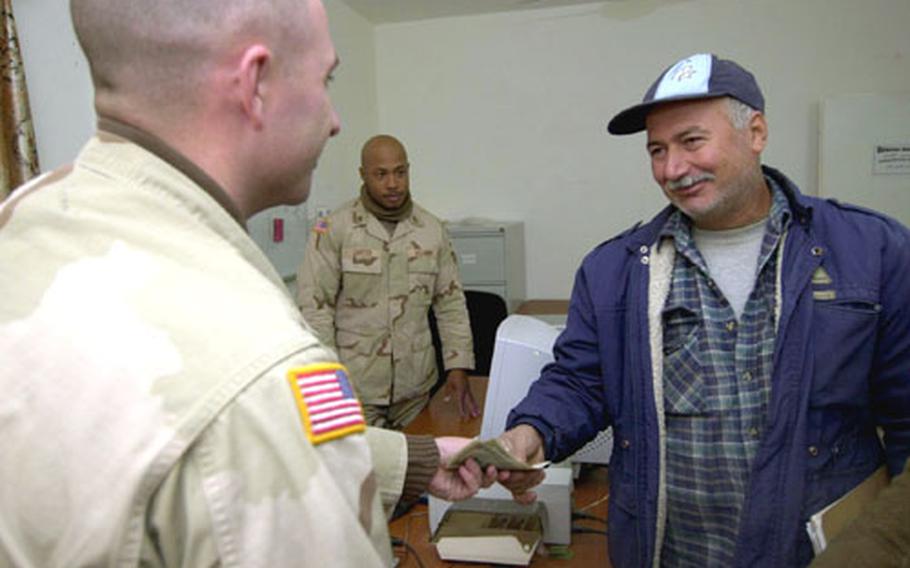 Staff Sgt. Jared Robinson of the 256th Brigade Combat Team hands cash over to an Iraqi citizen for damage caused to his property by the U.S. military. Staff Sgt. Darryl Carter looks on. (Joseph Giordono / S&S)

Staff Sgt. Jared Robinson of the 256th Brigade Combat Team hands cash over to an Iraqi citizen for damage caused to his property by the U.S. military. Staff Sgt. Darryl Carter looks on. (Joseph Giordono / S&S) 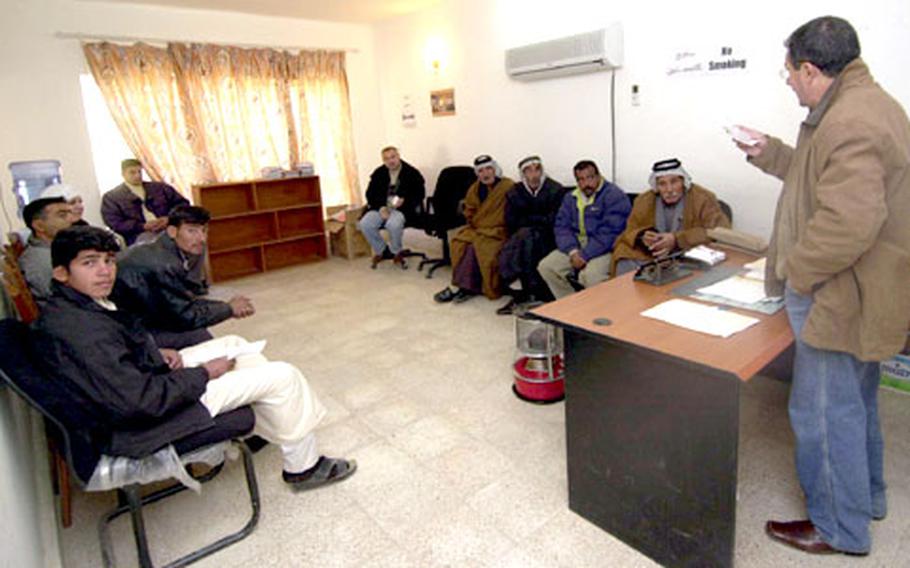 A group of Iraqis at the Government Information Center near Camp Victory wait to hear whether their damage claims have been approved or denied. (Joseph Giordono / S&S) 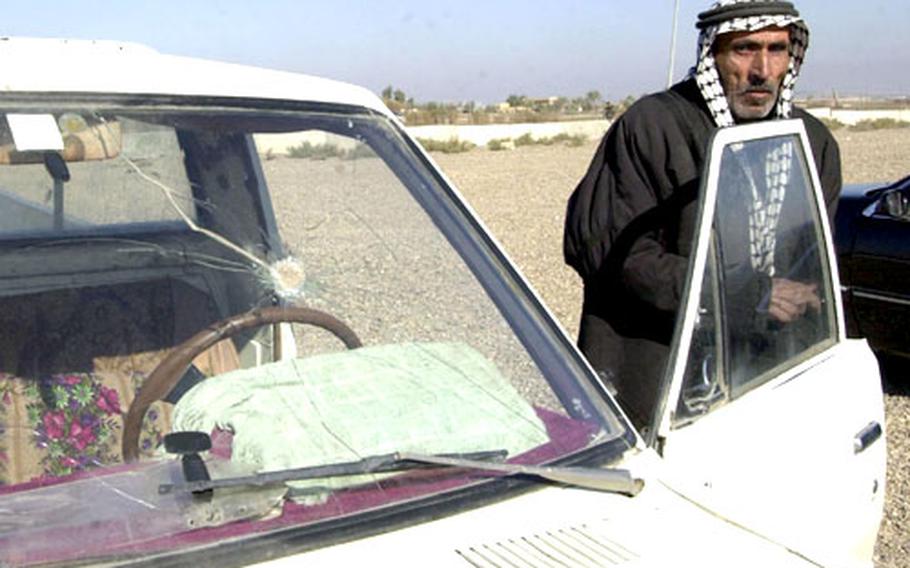 An elderly man who lives near Camp Victory in Baghdad says U.S. forces mistakenly shot at his truck, taking out part of his eye with a bullet fragment. The man came to the Government Information Center, staffed by U.S. soldiers, to file a claim. (Joseph Giordono / S&S) 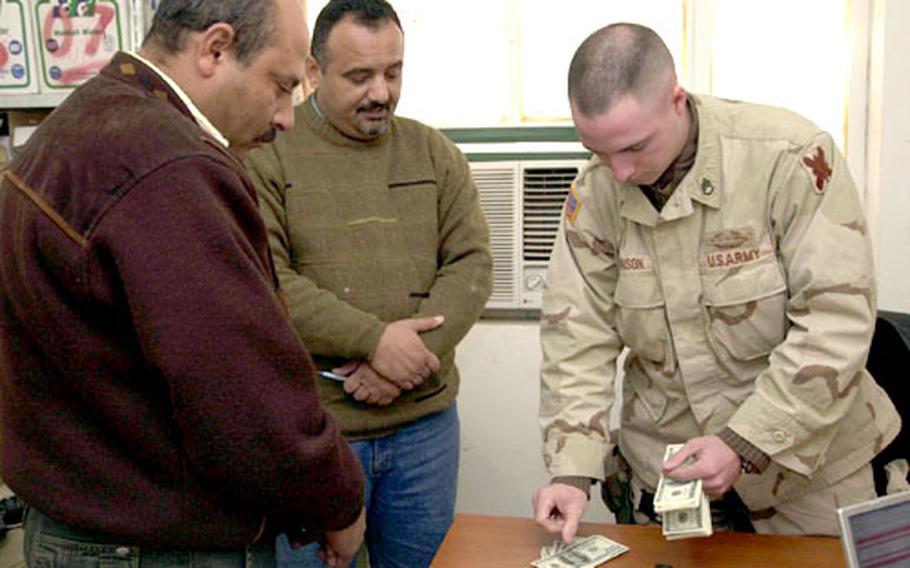 RADWANIYAH, Iraq &#8212; In a pair of cramped concrete buildings straddling the walls of Camp Victory, the U.S. military is trying to make things right.

Each Saturday, a handful of soldiers staff a regional government office, paying out claims for damage mistakenly done to Iraqi lives and property.

On an average weekend, the Government Information Center in Radwaniyah collects about 30 claims. U.S. military lawyers approve about half of those, with payouts ranging from a few hundred dollars to upward of $15,000.

The process can take weeks or months and claims filed when one U.S. unit was operating in a certain area are sometimes passed on to the next to arrive. The process is repeated at a dozen other centers across Iraq.

&#8220;I cannot make any promises as to whether your claim will be approved, but I will guarantee you that all of the facts get to the judge,&#8221; Staff Sgt. Jared Robinson, of the 256th Brigade Combat Team, tells one man, whose claim for damaged property had been pending for months.

Robinson, 25, of Jennings, La., is literally the bag man. If a claim is approved, identities are confirmed and the paperwork is in order, Robinson reaches into a desert camouflage Army rucksack, then counts out the appropriate amount in crisp greenbacks.

&#8220;They always want new bills: in large denominations,&#8221; he joked during a break from the process. Robinson, a Guardsman like the rest of the 256th, was finishing his second year of law school when the brigade was called to active duty.

Inside, Spc. Monty Johnson, 21, of Carencro, La., processes the claims.

He has each recipient read and sign paperwork releasing the military from any future claims. Johnson was a nursing student at the University of Louisiana at Lafayette before the call-up.

Most times, the short meetings end with a handshake and profuse thanks. But the process is not without its contradictions.

In one case, a 256th Brigade tank ran over an Iraqi man and his taxi.

The man lost his leg and his livelihood.

The military approved his claim, awarding him $10,000.

In another case, U.S. soldiers mistakenly killed three male members of an Iraqi family near Fallujah. The military awarded that family $9,700.

&#8220;At first, many local people didn&#8217;t trust it,&#8221; said the Iraqi translator running the center who identified himself only as Salladin.

For the soldiers, the claims process is a work in progress.

As Saturday&#8217;s claims session drew to a close, around 10 claims had been paid. But Carter announced he had one more.

Carter handed over a file containing a case that had languished since June. A young girl was hit in the face with bullet fragments, damaging both her eyes. She was taken to a U.S. military hospital in Germany, but doctors couldn&#8217;t do much for her. She lost one eye, and is blind in the other.

Her father had tried to balance his work and caring for her, but couldn&#8217;t afford the medication to keep down inflammation in the remaining eye. Carter had resubmitted the claim, which was originally denied. The father received $3,000.